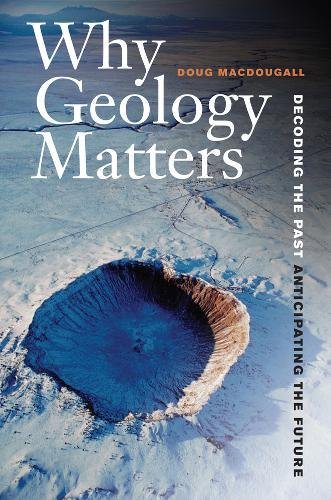 Why Geology Matters: Decoding the Past, Anticipating the Future
Doug Macdougall
University of California Press, 2011
304 pp., 92.33

Science in Focus: Davis A. Young

Editor's Note: At the beginning of this new year, we are introducing a web-exclusive series of weekly pieces on science. Each month, we will focus on a particular book (or article or film). In January, the focus will be on Doug MacDougall's Why Geology Matters: Decoding the Past, Anticipating the Future (Univ. of California Press). We'll feature four responses to MacDougall's book, beginning this week with a response from Davis Young, who writes that "Why Geology Matters should be mandatory reading for all scientists, school board members, and academic deans and presidents, but especially pastors, theologians, Christian school board members, and Christian college leaders."

This series would not be possible without the hard work of Heather Whitney, assistant professor of physics at Wheaton College. I'm grateful for her help.

Geologists are accustomed to think of the present as the key to the past. Doug MacDougall, professor emeritus of Earth Sciences at Scripps Institution of Oceanography, also believes that the geologic past is a key to the geologic future. He wrote Why Geology Matters: Decoding the Past, Anticipating the Future because he is persuaded that the Earth sciences hold "the keys to understanding and addressing many of the most pressing problems facing society."

MacDougall exudes enthusiasm about what geoscientists have learned. In a dozen lucid, informative synopses of significant episodes and themes in Earth history, he touches on the development of methods for deciphering Earth's past, the origin of Earth, impact events, Earth's first two billion years, plate tectonics, earthquakes, the construction of supercontinents, glaciation and ice ages, the Paleocene-Eocene Thermal Maximum, large igneous provinces, extreme volcanic eruptions, and mass extinctions. These episodes and themes serve as springboards for considering contemporary concerns, such as collision of extra-terrestrial objects with Earth, global warming or cooling, oceanic and atmospheric acidification, earthquake prediction, cataclysmic volcanic eruptions, and biotic extinctions. MacDougall concludes with an assessment of the future in relation to water, energy, and mineral resources as well as global climate change.

Chapter 8, for example ("Cold Times"), summarizes our knowledge about the Pleistocene Ice Age in light of geochemical and sedimentological clues in deep-sea sediments; plate-tectonic driven reconfiguration of continents and associated oceanic circulation patterns; alteration of precipitation patterns and albedo; distribution of glacial deposits; the periodicities of precession of the equinoxes, obliquity of Earth's rotational axis, and eccentricity of Earth's orbit; changes in solar insolation; variation in seawater paleo-temperatures determined from oxygen isotope ratios of fossil shells and glacial ice; and concentrations of atmospheric greenhouse gases preserved in ice-trapped bubbles. MacDougall points out that we can now more effectively assess how the climate system might respond to future perturbations based on insights into the operation of Earth's climate system during the Pleistocene Ice Age.

As Chapter 8 illustrates, MacDougall is convinced that a "holistic [my emphasis] view of our planet is important for fully understanding the workings of the Earth today, for deciding its history, and also for using that knowledge to predict the future." As every geologist knows, geoscience "is perhaps the most truly interdisciplinary of all the sciences." Indeed, the broadly interdisciplinary character inherent to the geosciences is a major source of the appeal that geology/Earth science has for its practitioners.

Implicit, perhaps subliminal, in Why Geology Matters is that 1) development and application of solutions to global resource, natural hazard, ecological, and climate change issues require that scientists, policymakers, politicians, and the general public all need far more exposure to the Earth sciences and that 2) introductory geoscience courses need greater stress on their interdisciplinary character and relevance to contemporary global issues. But more specifically, it is clear that all Christian high school and Christian college students ought to gain substantial knowledge about the structure, composition, behavior, and history of their God-given home, planet Earth. The current situation, in which the geosciences are ignored totally, woefully underemphasized, or grossly distorted in Christian high schools and Christian liberal arts colleges, is inexcusable and must be radically changed. MacDougall's book amounts to a wake-up call for a much larger place for geoscience education. Why Geology Matters should be mandatory reading for all scientists, school board members, and academic deans and presidents, but especially pastors, theologians, Christian school board members, and Christian college leaders.

Davis A. Young is professor of geology emeritus at Calvin College. His books include The Biblical Flood: A Case Study of the Church's Response to Extra-biblical Evidence (Eerdmans); Mind Over Magma: the Story of Igneous Petrology (Princeton Univ. Press); and (with Ralph F. Stearly) The Bible, Rocks and Time: Geological Evidence for the Age of the Earth (IVP Academic).

I assume that those who claim that there "are very serious problems with the theory of evolution" because the physical evidence is not ironclad are equally comfortable with the Theory of the Resurrection as a theological proposition for the same reason.--Dan Bruce, The Prophecy Society