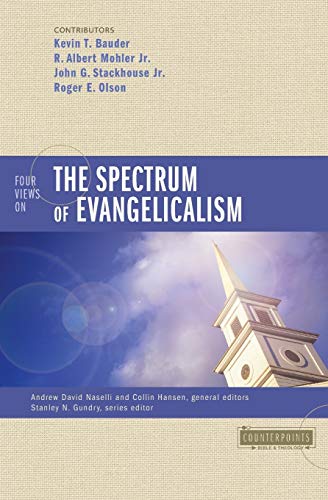 I grew up in a Southern Baptist church three hours from the Southern Baptist Theological Seminary, and I never said the Apostles' Creed growing up. I recall a time in high school English class when I was reading the part of John Proctor from the famous Arthur Miller play The Crucible, and I mispronounced Pontius Pilate, having grown up never pronouncing Pilate's first name. My classmates gave me a hard time. "I thought you were a Christian," they exclaimed.

Well, at this point in my life, I'd say I had a real and enduring faith in Jesus Christ, but I was ignorant of one of the oldest statements of Christian belief. It's that same Christian idiosyncrasy that makes Albert Mohler, president of Southern, an odd choice to defend what the editors call "Confessional Evangelicalism" in Four Views on the Spectrum of Evangelicalism.

Mohler succeeds in defining evangelicalism in general by appealing to historical, phenomenological, and normative (theological) definitions. Briefly, he capably traces how evangelicalism got started and shows the early theological and practical emphases that occurred after World War II. He then discusses how in popular culture the word "evangelicalism" is defined, albeit with some truth but many misunderstandings. Lastly, Mohler begins to hint at the "confessional" qualifier when he states, "evangelicalism refers to that movement of Christian believers who seek a conscious convictional continuity with the theological formulas of the Protestant Reformation." This well-stated definition is what I thought the entire chapter would be about. It wasn't. Mohler went on to continue to frame a typically evangelical theology, though without much reference to the Reformation with the exception of a few doctrinal issues.

My own denomination, the Evangelical Presbyterian Church (EPC), has attempted something like this center-bounded set. We have actually codified what we call "essentials." This comes from the oft-cited phrase (the origin of which is subject to debate), "in essentials, unity; in non-essentials, liberty; in all things, charity." These "essentials" are Mohler's first-level doctrines, including the authority of Scripture, the Trinity, salvation by and in Christ alone, and Christ's second coming. Other theological issues are deemed "non-essential" though that doesn't mean they aren't important.

In my estimation, it isn't that Mohler misrepresents confessional evangelicalism; rather, he largely ignores it. For instance, he doesn't even mention a famous confession or creed. He does refer to the councils of Nicea, Constantinople, and Chalcedon, but he never explicitly outlines the content of the creeds that resulted from those councils. He mentions the importance of justification by faith alone, but never discusses the great Reformation-era statements of faith. Even with regard to his own Calvinist predilections, he doesn't mention the Westminster Standards or The London Baptist Confession of Faith.

C.S. Lewis alludes to this in his preface to Mere Christianity, where he talks of Christianity as a large hallway with several doors: "If I can bring anyone into that hall I shall have done what I attempted. But it is in the rooms, not in the hall, that there are fires and chairs and meals." The "confessional" of confessional evangelicalism has several of those rooms, but many of them have that warm fireplace with the nice drink of choice. When Mohler discusses his own tradition in the SBC, he discusses it in relation to rooting out non-evangelicals. He doesn't promote it as the rich, warm fireplace. Mohler even admits as much when he lauds the birth of 20th-century evangelicalism: "[Early evangelical leaders] set out to establish an evangelical platform that minimized denominational differences—those pesky second-order doctrines."

This is where I have to depart from Mohler's account of confessional evangelicalism. Despite sharing the same center of evangelicalism, confessional evangelicals believe denominations and traditions still matter. While Mohler would likely agree, given his place in the SBC, he does not accentuate this fact in his essay. There are plenty of reasons to speculate why, but the simplest might be that, typically, Baptist denominations typically do not emphasize confessions and creeds.

2. Reformation-rooted theology. Confessional evangelicals will adhere to justification by faith alone, and yet they will also know why they adhere to a certain position on the Lord's Supper. It's not being a sacramentalist that makes someone a confessional, but knowing why he is a sacramentalist. Is he Zwinglian? Calvinistic? Lutheran?

3. Near-Center theology. A confessional evangelical will care about conserving doctrines that aren't just about the center but are nevertheless very close to it. The issue of contention will, no doubt, be the particular confession or tradition at stake. Not everyone will have the same answer as to what constitutes "near-center." However, in my tradition, that means Calvinistic soteriology matters highly. Furthermore, a view of covenant theology—how the Bible is one story told from beginning to end—matters highly. In short, some sort of historic confession from long-dead saints is vital. And though confessions aren't Scripture, a confessional evangelical will care deeply about historic truths and articulations of biblical truth, because they act as a guide from those saints of old. Confessions and creeds have acted as those sort of guides, and their theological content has been expansive of the typical evangelical core doctrines. And while I don't necessarily agree with Lutheran confessions, I can still share the moniker of being a confessional evangelical with a Lutheran with whom I also share the center.

4. Ancient liturgical practices. Generally, confessional evangelicals will pay attention to the church calendar. The seasons—Advent, Lent, Holy Week, Pentecost—shape the church as it orients its life and corporate worship rhythms around the life of Christ. This is an ancient practice, and it keeps the idea of confessional truth always before a confessionally evangelical church.

In that same vein, a confessionally evangelical church will likely practice a gospel rhythm of liturgy in corporate worship. The generic evangelical church liturgy is a block of songs, announcements, sermon, and closing song. A confessionally evangelical liturgy will structure the service to rehearse the gospel more clearly in the structure itself. In some cases, this liturgy is pre-formed by the denomination itself (e.g., evangelical Anglican churches). At our church, we do this by certain elements among many others: a call to worship, a confession of sin and assurance of pardon, a prayer of Thanksgiving and intercession, the Lord's Prayer, reading the sermon text and the sermon, and a benediction. In short, confessionally evangelical worship will balance the immanence of God's nearness to the transcendence of God's mystery and will seek to do so within the very form, and not just the content, of Christian corporate worship.

It's just that I go back even further than that—to the Reformation and, further still, to the creeds from the Patristic era. In other words, confessional evangelicals seek a little more continuity with the past than what a generic evangelical might.

In the final chapter of The Rise of Evangelicalism, Mark Noll, having recounted the history of the First Great Awakening and its major figures, notes how evangelicalism has never flourished as an intellectual movement. Noll says that one of the major reasons for this has been evangelical insistence on innovation, and a shedding of church tradition and ecclesiology. Intellectualism comes from the past, Noll asserts. But since one of the marks of evangelicalism has been personal conversion and the new birth, evangelicals will attempt all manner of things to reach the lost. The ironic byproduct of a preoccupation with the perils of the present, though, has been a detachment of the things of the past. Discontinuity with the past seems to be traceable to the evangelical origins of the First Great Awakening.

What confessional evangelicals seek, then, is a mix of evangelical core doctrines rooted a little further in the past. As evangelicals, we share a fixed center on the person and Gospel of Jesus Christ. We agree with all those forebears who made the main things the main things. The simple reality is that we also want to recover some of the things that early evangelicals discarded. Because much of that past is still important too.

Dave Strunk is a pastor at Cherry Creek Presbyterian Church in Denver. He earned degrees from the University of Tennessee and Denver Seminary. He blogs at The Redemptive Angle.