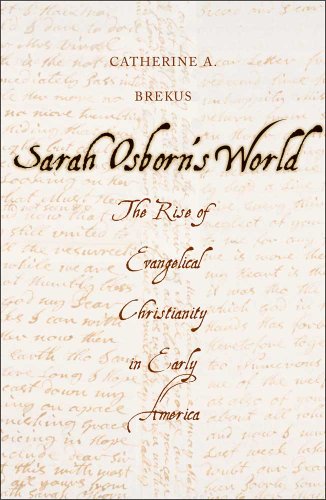 Without a doubt, Jonathan Edwards has received more attention from scholars than any other figure in the era of early American evangelicalism. Thousands of journal articles, dissertations, and books have been written on him, and there is no end in sight. But in the last ten years some outstanding monographs have appeared on lesser-known, but important, American evangelicals, including the founder of the African Methodist Episcopal Church, Richard Allen; the indefatigable Methodist leader, Francis Asbury; the itinerant missionary, David Brainerd; the black patriot, Lemuel Haynes; and, most recently, the poet Phillis Wheatley. These biographies highlight the pervasive breadth of early evangelicalism in America. In Sarah Osborn's World: The Rise of Evangelical Christianity in Early America, Catherine Brekus sorts through a mountain of manuscripts and secondary sources to produce a fascinating study of an evangelical woman who has largely gone unnoticed by scholars. Brekus intends to use Sarah Osborn's life to illuminate the cultural context of the broader evangelical movement in early America.

Some of the details of Sarah's life are painful to read because of the severity of the personal, physical, and financial trials that she endured. Born in England in 1714, she moved to Boston in 1723, eventually settling with her parents in Newport, Rhode Island in 1730. Strong-willed at times, Sarah defied her parents by marrying a sailor named Samuel Wheaten in 1731 at the age of seventeen. Wheaten perished at sea within a year of their marriage, leaving Sarah to care for their newborn son alone. While raised as a strict Congregationalist, she did not embrace Christianity until experiencing conversion in January 1737 after listening to Nathaniel Clap, the pastor of the First Congregational Church at Newport, deliver a thundering sermon on humanity's inherent sinfulness. Her initial feelings of comfort after renouncing her sinful ways and turning to Christ, however, turned to doubt about the state of her soul when George Whitefield and Gilbert Tennent arrived at Newport in the early 1740s to stoke the fires of the Great Awakening. Reminded of her worldly habits of playing cards, gossiping, and dancing, she wondered if she was truly one of the elect. But after receiving spiritual counsel from Tennent, she renewed her commitment to God and became heavily involved in church life, visiting the sick, evangelizing, and leading a women's society that met weekly for prayer and Bible study.

In the spring of 1742, at the age of twenty-eight, Sarah agreed to marry a fifty-seven-year-old tailor named Henry Osborn, a widower with three boys of his own. She believed that one of the benefits of her second marriage would be financial stability. But within months of her wedding, Henry made a poor investment, resulting in bankruptcy for the newly formed family. For some unknown reason, Henry hardly worked in the years following his bankruptcy. Sarah became the primary breadwinner, earning a living as a schoolteacher and performing household chores for other families. Despite her relentless work ethic, the Osborns were often just one step away from financial devastation.

In the years following her second marriage, Sarah faced hardships that sometimes challenged her faith. In 1744, her's only son died, one month before his twelfth birthday. Trying to make sense of this sorrowful event, she concluded that her beloved son had been taken so that she would place a greater reliance on God to sustain her needs. By 1760, all of the Osborn children had passed away, including Sarah's three stepsons, the last of which was killed on the battlefield during the French and Indian War. Even though she struggled to feed herself, Sarah gave what little time, effort, and money she had left to her neighbors and, especially, to Henry's grandchildren, who were living in squalor, seemingly neglected by their indigent mother. Adding to her difficulties, Sarah experienced chronic physical pain throughout her life, which Brekus attributes to rheumatoid arthritis or possibly multiple sclerosis.

Remarkably, in the midst of her busy schedule, Sarah began hosting a prayer meeting in the mid-1760s. At first the gathering was for free and enslaved blacks, soon she opened it to practically anyone who wanted to attend, regardless of race or denominational ties. At its peak in 1767, Sarah estimated that over 500 people gathered at her weekly meetings, though not on the same day. The welcome that blacks received at the Osborn household, however, was marred by Sarah's unhesitating support for the slave trade that thrived at Newport. She even owned a slave boy, Bobey, and was shocked when his mother protested Sarah's intention to sell him. Nevertheless, some while after Samuel Hopkins' arrival as the pastor of the First Congregational Church in 1770, Sarah began to question the ethics of owning other human beings.