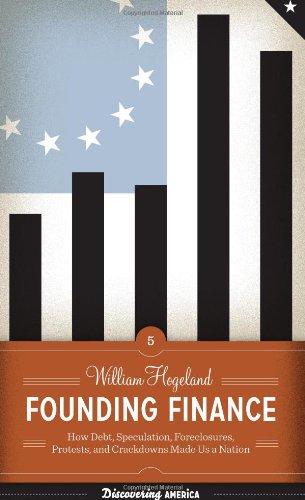 The standard story about America's founding era goes something like this. One group of founders, such as James Madison and Alexander Hamilton, insisted on a strong federal government to replace the spineless Articles of Confederation, while the other preferred to leave much more authority with the states and warned about the dangers of an overweening federal government. Both sides were committed to democracy, and they forged a compromise that preserved elements of both positions when they gathered in Philadelphia to hammer out the Constitution in 1787.

It comes as no surprise that William Hogeland has major nits to pick with this story in Founding Finance. Why bother banging out yet another book about the founding era if he didn't? But Hogeland doesn't just set out to show how the conventional story has things shaded a little wrong or omits a telling incident. He wants to persuade us that it's a cover-up.

The first problem with the consensus narrative is that most of the gentlemen who gathered in Philadelphia were more anxious to squelch democracy—democracy of a certain sort, at least—than to let it blossom. "Our chief danger," Edmund Randolph of Virginia said on the first day of the meetings that became the Constitutional Convention, "arises from the democratic parts of our [state] constitutions." What he and others feared was the social tumult that had boiled over in violent protests like Shays Rebellion in Massachusetts and would give rise to the Whiskey Rebellion in Pennsylvania a few years later. The second problem is that, while finance is an afterthought in the standard story, it was utterly central at the time. "The financial wracking of America in the 1780s," Hogeland writes, "the open struggle between ordinary people and upscale investors, was edited out of our common memory long ago."

Hogeland praises the Tea Party and Occupy movements for bringing these economic issues back to our attention. But both movements get the founding era all wrong. Although the Tea Party is right "to connect economic protest with elements in our founding period," it mistakenly "tells us that small government, low taxes, no public debt, and little government spending were elemental purposes in our founding as a nation." And in "associating Liberty Park in New York with Boston's famous Liberty Tree," and quoting the Constitution's " 'we, the people' to suggest that a government originally founded by and dedicated to serving what Occupy calls 'the 99 percent' has been stolen by big money," the Occupy movement is no less deluded.

In Hogeland's telling, the framers did indeed argue strenuously over how much power to give the federal government and other issues, but both sides were property-holding gentlemen who agreed on the need to stifle the "radical egalitarians," as Hogeland calls them, who were insisting on a place at the table. The Constitution was intended to keep liberty in check, not to promote it.

Hogeland begins his story with a remarkable and mostly forgotten radical named Herman Husband, who, as the leader of a movement called the North Carolina Regulation, became "one of America's first full-time activists for economic and political equality." Husband had grown up wealthy in Maryland, but—after hearing George Whitefield preach in 1739—he became convinced that the millennium could be achieved in America, moved to North Carolina, and led a revolt of the commoners against the propertied class. (Husband's spiritual journey took him from his parents' Anglicanism to Presbyterianism, Quakerism, and then out of organized religion altogether). He fled the state in 1771 to avoid being hung and wound up in Western Pennsylvania, where he was elected to the Pennsylvania assembly and eventually jailed during the Whiskey Rebellion.

From Husband's rebellion in North Carolina, Hogeland shifts to Philadelphia. Although most historical accounts of 1776 focus on the meetings of Thomas Jefferson and his colleagues in the building we now know as Independence Hall, they'd borrowed the building from another set of lawmakers, the Pennsylvania assembly. The leader of the Pennsylvania assembly, John Dickinson, was a patriot but opposed breaking with England. To undercut Dickinson and to further independence, Samuel and John Adams conspired with the Pennsylvania rabble, first in an unsuccessful voting campaign to unseat the current assembly members, and then by persuading the framers to add to a May 10, 1776 referendum a preamble that called into question the legitimacy of the Pennsylvania assembly (Pennsylvania actually was unusually progressive, allowing even the unpropertied to vote) because the assembly, like other colonial legislatures, swore loyalty to the crown. The preamble spurred militia-led uprisings throughout Pennsylvania in support of independence. Were it not for this subversion of the elected assembly, Hogeland argues, the most important colony might have refused to support independence, and the Declaration of Independence might have died on the vine.

Then it would appear that anyone who walked in a different direction from those who held the power would not be considered "Americans." You are also saying, since this was also a part of life in America at the time, that brutal and inhumane institution of slavery as well has the denial of humanity to those who were enslaved, even "by those who crafted our founding documents," was in line with the spirit of our nation's founding. Perhaps we DO need some reshaping...