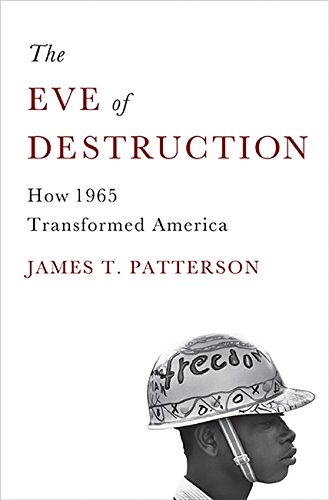 The Eve of Destruction

I have a fondness for books that center on a particular year. If such a book swims into my ken, I'll generally read it—good, bad, or indifferent. There's a fascination in isolating a particular slice of time, and in seeing how an author frames it for our instruction and delight.

James Patterson's The Eve of Destruction: How 1965 Transformed America draws on the years of study that went into his Bancroft Prize-winning volume for the Oxford History of the United States, Great Expectations: The United States, 1945-1975, published in 1996. Patterson is Ford Foundation Professor of History Emeritus at Brown University. An eminent scholar, he tries his hand at popular history here.

Patterson acknowledges right away that many readers may wonder at the special significance he attaches to 1965. Nevertheless, he is adamant that "1965—the year of military escalation, of Watts, of the splintering of the civil rights movement, and of mounting cultural change and polarization—[was] the time when America's social cohesion began to unravel and when the turbulent phenomenon that would be called 'the Sixties' broke into view."

Most of the book is taken up with two of the themes Patterson identifies—escalating U.S. involvement in Vietnam and racial strife—and President Lyndon Johnson looms large throughout the narrative. Despite Patterson's efforts to tie these themes to 1965 in particular, the result is a rehashing of familiar stories that played out over many years.

Conscious of this, Patterson tries to ground his political narrative in the everyday experience of Americans in 1965. He tells us what songs topped the charts, what was on TV, what Time magazine was featuring, and so on. That fits rather uneasily with his thesis (he's driven to remark that in 1965, "as later," most Americans tended to be absorbed with matters close to home, not paying much attention to events in Southeast Asia). And so another move in his argument is required.

First, Patterson gives us glimpses of "America in Late 1964" (as his first chapter is subtitled), a "buoyant time for the majority of Americans." While noting some counter-evidence—particularly the state of most black Americans, mired in poverty and still suffering from blatant discrimination—he exaggerates the extent to which the national "mood" was confident and carefree. Then, in turn, he exaggerates the extent to which various events in 1965—cultural as well as political—announced a drastic shift in the national mood. (See, for example, his inadvertently comical analysis of the significance of "Satisfaction," released by Rolling Stones in 1965, and Bob Dylan's shift to electric music.) That shift was epitomized, for Patterson, in the song that gives his book its title: Barry McGuire's short-lived hit "The Eve of Destruction."

Patterson is a careful scholar. Periodically he will observe that "not everything changed in 1965." And yet having done that, he'll return to pushing his thesis, hard. It's possible, of course, to profit from a book like this even as one disagrees with the thesis: the reader can still come away with a deepened sense of a historical moment. It would have helped if Patterson had given us more of his own 1965. He tells us at the beginning that he turned thirty in 1965, "at which time I was a first-year assistant professor of US history at Indiana University in Bloomington." He adds that he "had become a father for the first time in December." Beyond that, though, we get little with a personal texture. Patterson's cultural references are bland stuff (Time gets more than a dozen citations).

I was around in 1965, too, turning seventeen midway through that year. Reading Patterson on the buoyant national mood "in late 1964," I remembered the time several years earlier, in 1961, when our family doctor (who started the house church we attended) gave me a tour of the bomb shelter he'd had constructed at his home. He and his wife were a vibrant couple, interested in all sorts of things—but he thought it prudent to have a bomb shelter in the back yard.

My 1965 overlaps a good deal with Patterson's, of course—anyone who was living in the United States at that time would have to say the same—and yet it was also quite different from his—different not only in detail but in flavor. One mark of that difference is the near-absence of religion from his account of a turning point (as he would have it) in the history of the United States. I've written elsewhere about Patterson's patronizing obtuseness on this subject, especially with regard to evangelical Christians; here it's more a matter of largely ignoring it altogether.