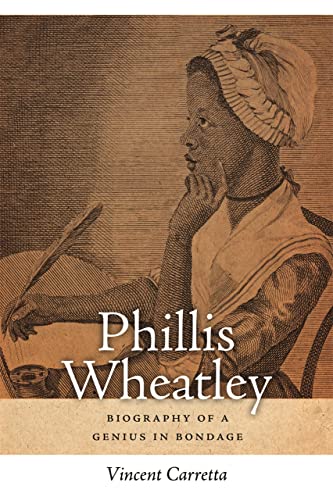 Phillis Wheatley: Biography of a Genius in Bondage

A number of biographies of black 18th-century evangelicals have been published in the last decade. Chief among these are John Saillant's Black Puritan, Black Republican: The Life and Thought of Lemuel Haynes, 1753-1833; Richard Newman's Freedom's Prophet: Bishop Richard Allen, the AME Church, and the Black Founding Fathers; and Vincent Carretta's Equiano the African: Biography of a Self-Made Man. In his latest book, Phillis Wheatley: Biography of a Genius in Bondage, Carretta explores the life and work of a leading African American poet.

Kidnapped from an unknown location in Africa as a child and put aboard a slave ship to America, Phillis Wheatley arrived at Boston in July 1761. The wealthy evangelical merchant John Wheatley and his wife, Susanna, bought the young girl, naming her Phillis after the slave ship that carried her across the Atlantic. She probably could not have ended up in a better home, for the Wheatleys and their 18-year-old twins, Nathaniel and Mary, treated her like a family member as opposed to a slave or even a servant. She learned to read and write, and exhibited an affinity for classical literature and poetry. Furthermore, the Wheatleys gave Phillis unusual freedom to mingle socially with visiting guests.

While recognizing that the Wheatleys' kindness toward Phillis was rare at that time, Carretta bypasses any thorough analysis of the role that faith played within the family. Instead, benevolence toward Phillis was meant "to publicize their status, piety, and charity." Carretta admits that the Wheatleys "also used her to display their commitment to evangelical Christianity," but apparently not out of love. Rather they wanted to demonstrate "that they could afford to spare Phillis the drudgery one would expect to be assigned to someone in her condition." It is certainly possible that the Wheatleys paraded Phillis about as a way of highlighting their wealth and status, but another scenario, and one that is not seriously considered by Carretta, is that John and Susanna Wheatley genuinely cared for Phillis and made sure that she was given ample free time to develop her talent as a writer.

Carretta does a fairly good job at introducing the ministry of George Whitefield and Methodism in general. He depicts Methodism as a despised movement due to its perceived emotionalism and outdoor preaching that infringed on the territory of resident clergyman in America and Britain. Carretta also rightly notes that many people disliked the democratic spirit of Methodist itinerants, who routinely preached to the lower ranks of society, including slaves. Of course the hypocrisy of Whitefield is apparent in his purchasing slaves to support his Georgia orphanage after denouncing the institution itself. Nevertheless, Wheatley and other slaves of African descent were drawn to the Grand Itinerant, perhaps because of his energetic preaching and his assurance that an oppressed person experiencing the "new birth" would enjoy heavenly bliss in the afterlife. Although there is no record of when Wheatley first heard Whitefield, it is likely that she went to hear his sermon at the Old South Church at Boston on February 27, 1764.

Carretta, a professor of English literature at the University of Maryland, gives careful attention to Wheatley's poems, both in manuscript and published form. His research identifies Wheatley's first poem: not, as previously assumed, "On the Death of the Rev. Dr. Sewell" but rather a four-line piece about the Thachers, a distinguished Boston Congregationalist family. Among Wheatley's published poems, Carretta singles out "On Virtue," which urges readers to seek divine grace rather than human wisdom alone; "To the King's Most Excellent Majesty," a piece that praises George III for repealing the Stamp Act; and her most notorious poem, "On being brought from Africa to America," which seemingly condones slavery. Carretta, however, dispels the notion that Wheatley justified slavery:

Modern critics have accused Wheatley, or at least the primary voice in her poem, of rejecting her African heritage and engaging in racial self-hatred. But such critics confuse accommodation with appropriation. Like many authors of African descent who follow her, Wheatley repeatedly appropriates the values of Christianity to judge and find wanting hypocritical self-styled Christians of European descent. Theologically, Wheatley perceives her capture in Africa as leading to a fortunate fall that allows her formerly "benighted soul" to rise to embrace Christianity.

The poem that undoubtedly set off Wheatley's career is her elegy "On the Death of the Rev. Mr. George Whitefield," which was widely read by Americans and Britons alike and catapulted the young author to stardom. As Wheatley increased her literary output and mastered her craft, John and Susanna encouraged her to produce a collection of her poetry. While at first not successful at locating subscribers in Boston for her proposed book, Wheatley's fortunes changed when she became acquainted with the wealthy English evangelical, Selena, Countess of Huntingdon. With the support of the countess, Archibald Bell of London published Poems on Various Subjects, Religious and Moral in 1773 with an unprecedented frontispiece depicting a female author of African descent.

To promote the book, Phillis traveled to London with Nathaniel Wheatley. In this section of the story, Carretta raises the provocative argument that the aspiring female author might have gone to England in order to seek freedom. Her arrival at London in the summer of 1773 coincided with the anniversary of a landmark court case in which Lord Chief Justice William Murray, the first earl of Mansfield, ruled that a runaway Virginia slave named James Somerset, who had been captured in England, could not be forced to return to the colonies as a slave. Murray's judgment opened the door for self-manumission by colonial slaves residing in England. Carretta points out that Wheatley would have been familiar with Boston newspapers relaying the Somerset case (the same newspapers that printed her poems). Even more important, Wheatley's London tour guide was none other than the outspoken abolitionist Granville Sharp, who had backed Somerset. Carretta is right to claim that Sharp almost assuredly would have talked about manumission with Wheatley: "It is unimaginable that while Wheatley and Sharp were looking at caged African animals, as well as the emblems of British regal glory, Sharp would not have brought up the subject of his judicial triumph the preceding year in extending British liberty to enslaved people of African descent. Sharp considered himself ethically and morally bound to help people in Wheatley's condition." While we don't know Wheatley's intentions in traveling to London, we do know that Nathaniel, who now ran the family's business, gave Phillis his word that she would be freed once she returned to Boston. The implication is that Phillis knew her options and Nathaniel virtually had no choice but to free her.

With her newfound freedom, Wheatley was not necessarily better off. On September 13, 1773, she returned to Boston a free woman, but now she had to provide for herself. Carretta quickly passes over the possibility that the faith of John and Susanna Wheatley might have played an important part in allowing Phillis to continue to live with them, even though they were now under no further financial obligation to help their former slave.

Susanna died not long after Phillis' return from London, and John's death followed five years later. Phillis, perhaps wanting a better social footing, married the purportedly disreputable free black merchant John Peters in 1778. After poring over the available records, Carretta questions the reliability of the information on Peters, particularly since one of the accounts unjustifiably portrays him as "the villain in a Dickensian narrative of the decline and death of a sentimental heroine." Indeed, very little is known about Peters or about Phillis in the years following her marriage until her death in 1784. Within the limited data, Carretta discovers that Peters lost a lawsuit which effectively ruined the couple financially. Once a successful author with a bright future, Wheatley now struggled to publish a second book, printing proposals in 1779 for a substantial work of three hundred pages to be priced (extremely expensively) between nine and twelve pounds. Her proposed project never saw the light of day. Wheatley continued to publish occasional individual poems but never produced a second book. She died on December 5, 1784 and was laid to rest in an unmarked grave.

Carretta's biography of Wheatley is simply superb—a welcome addition to the burgeoning literature on key 18th-century evangelicals. In many ways, Phillis Wheatley is a marked improvement from Carretta's earlier book on Olaudah Equiano, a much longer monograph which often belabors the point that Equiano might not have been born in Africa. The slimmer volume on Wheatley succinctly narrates the captivating story of a woman in bondage who used her talent as a writer to secure her freedom.

Jonathan M. Yeager is visiting assistant professor of Religious Studies at the University of Tennessee at Chattanooga. His most recent book is Enlightened Evangelicalism: The Life and Thought of John Erskine, published by Oxford University Press in 2011.