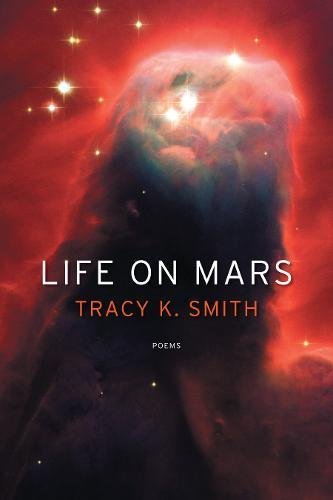 And while Smith's first book, The Body's Question, probed at the big questions surrounding the death of her mother through the particularity of the body, which always asks "what do you believe in?", this book suggests death as a cosmic "ride beyond the body, its garments"—a trip to space, maybe, with "the white cloud of [her father's] hair / In the distance like an eternity."

Smith has reached through three books of poems to get to God and all of the cosmos, which, though they lurked in the first two books, are openly explored in this ambitious collection. Life on Mars has the darkness of her second book, Duende—its open fear—and the emotion of The Body's Question—her poems call for feeling and response. But there is a difference here. She has hit upon the necessity of telescopes: to see more widely, farther back, farther out, the key is more sensitivity and great distance, not just, as in some of the earlier poems, a wider angle.

In so doing, Smith flirts with the ecotheological aesthetic of Robinson Jeffers—or maybe of a biblical psalmist, noting the contingency and brevity of human life up against the cosmos. The final poem in the volume, "Us & Co.," ends,

Moments sweep past. The grass bends

then learns again to stand.

There is yet a distance to go in this increased sensitivity for Smith. Like the Hubble, whose first images were blurry, Smith seems still to be growing into an awareness of how poetic form relates to these biggest of questions. Sometimes she turns to older forms—the ghazal, the sonnet. They are lovely, especially the ghazal tucked into the mourning sequence "The Speed of Belief," but they feel less chosen than convenient, or sometimes less finished, as in the sonnet in the same poem. And often there are lines that feel that they have not attained the precision or power for which they were designed and of which the author is capable.

If anything, it would be exciting if Smith worked, as a telescope engineer works, tinkering experimentally with form. I suspect there are more innovative ways to use language to conceive of scale, limits, and mystery. There are more radical experiments to be tried, formally speaking—and she might rely less on tried-and-true poetic moves that expect predictable emotion to carry the poem. Some of the other innovative poets at Graywolf Press, such as Fanny Howe and Harryette Mullen, have done this with success. The Square Kilometre Array is an experiment in how to look from two places at once. I think Tracy K. Smith's work, like her father's before her, can conceive of the distance.

Tiffany Eberle Kriner is associate professor of English at Wheaton College. She is working on a book about eschatology and reading.