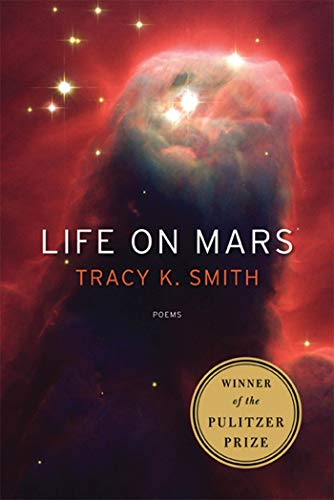 On Thursday, May 25, 2012 experts chose the site for the largest and most powerful telescope ever built—and it will be in two places at once. The Square Kilometre Array, named for the size of its collecting area, will be 50 times more sensitive than any present telescope and will be located in both South Africa and Australia. It will also be in two times at once, allowing scientists to peer through space into the past. They may learn more about how the first stars and galaxies formed, about dark matter and the nature of gravity. They may find extraterrestrial life.

Tracy K. Smith's Pulitzer Prize-winning volume Life on Mars explores some of the same big questions. And like the most sensitive of telescopes, Smith looks powerfully and precisely, scattering her collecting array across the globe and the surrounding space. No wonder: her father was one of the engineers of the Hubble telescope. What Smith finds is radiant, grave, and mysterious, reaching through space like the most powerful telescopes—into the past and future. She gives us visions to set beside the stunning images we're receiving even now from the surface of Mars.

The collection revolves around outer space and its kitsch, ranging from references to David Bowie—the title of the book alludes to a song from the 1971 album Hunky Dory—to science-fiction movies from the '60s, '70s, and '80s. Such references, though cultural ephemera, are, under scrutiny, tools for irony, questioning, and critique. One of the best poems of the collection, "My God, It's Full of Stars," considers humans' relationship to the universe via Arthur C. Clarke's 2001: A Space Odyssey, the 1984 film Starman, the 1973 film Soylent Green, and others.

The particularities of Smith's gaze allow her to transform the kitsch into fantasies bringing her into imaginative concourse with the unreachable—moon rocks, stars, rock stars, movie stars, and—most important for this collection—her dead father.

In one sharp section, she brings up Charlton Heston's role in Soylent Green, imagining him trying to visit her. He asks once, twice, and "The third time / He did it like Moses: arms raised high, face an apocryphal white." Their conversation wittily brings together the most inside of filmic and theological jokes with a powerful critique of science fiction:

I ask him to start from the beginning, but he goes only halfway back.
That was the future once, he says. Before the world went upside down.

Hero, survivor, God's right hand man, I know he sees the blank
Surface of the moon where I see a language built from brick and bone.
He sits straight in his seat, takes a long, slow high-thespian breath,

Then lets it go. For all I know, I was the last true man on this earth. And:
May I smoke? The outside voices soften. Planes jet past heading off or back.
Someone cries that she does not want to go to bed. Footsteps overhead.

A fountain in the neighbor's yard babbles to itself, and the night air
Lifts the sound indoors. It was another time, he says, picking up again.
We were pioneers. Will you fight to stay alive here, riding the earth

Toward God-knows-where? I think of Atlantis buried under ice, gone
One day from sigh, the shore from which it rose now glacial and stark.
Our eyes adjust to the dark.

These poems get at the particularity of science fiction and its kitsch. (Smith's internal rhyme and assonance present a fine tuning of the ear to that voice.) But their real power lies in the connections they make to the deeper questions.

In the poem "Sci-Fi" (which easily could have given its title to the book), Smith offers images of "Standard Uranium-Neutralizing device[s]" that colonize the word "sun," of neutralized gender, body management, and extended life. She drives home the irony and critique of her vision, however, and reasserts the ambiguous power of the genre with ironic echoes of national credos and the boomerang of words that undercut their own aims:

Eons from even our own moon, we'll drift
In the haze of space, which will be, once

And for all, scrutable and safe.

The collection hinges, like this poem, on the question of what we do and don't—or can and can't—know, human limits and mysteries.

These questions are especially timely in a year when the United States has ended its space shuttle program, a program including the Hubble missions for which Smith's father worked so hard. And Smith's father makes his way into much of this collection—it is a book that ambitiously filters mourning through the medium of the entire universe, as "My God, It's Full of Stars" delicately posits:

Maybe the dead know, their eyes widening at last,
Seeing the high beams of a million galaxies flick on
At twilight. Hearing the engines flare, the horns
Not letting up, the frenzy of being. I want it to be
One notch below bedlam, like a radio without a dial.
Wide open, so everything floods in at once.
And sealed tight, so nothing escapes. Not even time,
Which should curl in on itself and loop around like smoke.
SO that I might be sitting now beside my father
As he raises a lit match to the bowl of his pipe
for the first time in the winter of 1959.