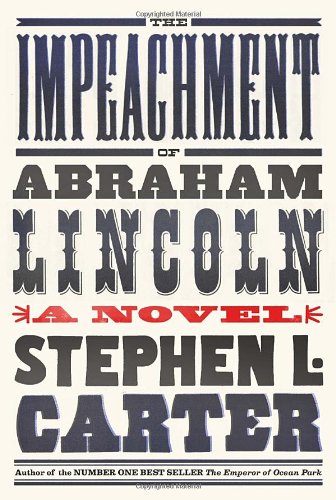 The Impeachment of Abraham Lincoln.

What if Abraham Lincoln's wounds from assassin John Wilkes Booth were not fatal after all? What if Lincoln recovered and continued to serve as president? That's the premise of Stephen Carter's superb new novel, The Impeachment of Abraham Lincoln.

Following a brief prologue, the main action begins in February 1867, and as the title suggests, all is not sweetness and light in Washington. A faction of Lincoln's own party wants him thrown out of office. There are two articles of impeachment relating to the president's actions during the war, and two more bearing on his conduct since the war ended. These disgruntled Radical Republicans believe that Lincoln has been far too soft on the defeated South, but they are also outraged more generally by what they regard as his riding roughshod over Congress and the laws of the land. In the campaign to unseat Lincoln, they are counting on support from fellow legislators who differ from them on many issues but who share their loathing for the president. If the House of Representatives votes for impeachment, charging him with "high crimes and misdemeanors," Lincoln will then face trial by the Senate.

Once a rarity, the counterfactual novel has become a familiar species of fiction—all too familiar, in fact, as if the mere premise were sufficient to dazzle and delight the reader. In this case, however, we are in good hands. Carter does many things at once—and does them as effortlessly (so it appears) as Usain Bolt coasting to victory. He teases out the implications of his scenario with a deep knowledge of Lincoln's time. He tells a page-turning tale of historical espionage. For lovers of the trial-narrative (I am one), he has riches to bestow: the courtroom is the Senate Chamber. And he continues his ongoing fictional history of "the darker nation," here above all in the person of his protagonist, Abigail Canner.

Abigail is a brilliant, ambitious, and high-minded young woman. Her parents, both dead, were among Washington's black middle class; her father, a plumber and bricklayer, built their house himself and furnished it with some ingenious contrivances of his own. Now twenty-one, Abigail has just graduated from Oberlin College, where she was a protégé of Charles Finney. A recommendation from the famous evangelist and college president has secured a job for her as a clerk at a Washington law firm.

In many ways, Abigail resembles other protagonists turning up everywhere these days in novels and movies: strong, self-reliant women who are bumping up against restrictions, stereotypes, sheer male boorishness, and worse. But there's a noteworthy difference: whereas many writers anachronistically project 21st-century women back into earlier settings, Carter gives us a nuanced character who is very much of her time and place—and the more real for it—even as she challenges assumptions right and left.

Going to the law office for the first time, Abigail rides a horse-drawn streetcar, "choosing the second row to avoid a squabble with the white citizens of Washington City, who seemed to consider the rear of the car their own private preserve, but also to avoid the ignominy that came of riding up front with the driver, where nowadays most men and women of her race tucked themselves without a thought: a discrimination until recently enshrined in city law. The war was over, the slaves were free, and the government of the United States guaranteed the rights of the colored race, but here in the nation's triumphant capital, in the midst of the most frigid winter in years, everybody was at pains to establish who was who." That's one paragraph on page 14 of a book that runs to just over 500 pages. Re-reading it, I'm reminded why I read fiction in the first place, and why a new book by Stephen Carter is always to be celebrated.

On top of all its novelistic pleasures, The Impeachment of Abraham Lincoln is perfectly timed for this election year. "Nowadays," Carter writes in an author's note at the end, "the more politically engaged among our citizenry tend to cry 'impeachment' whenever a President they happen to dislike does anything remotely controversial. Our sense of history has grown dangerously thin, and our sense of proportion with it." Amen.