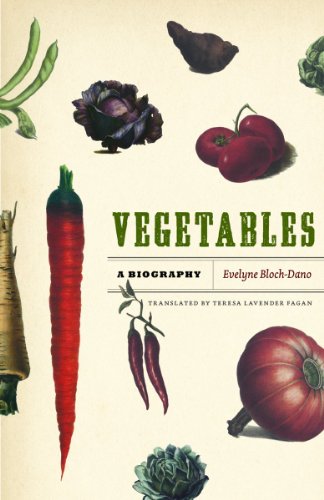 How we have "tamed" them.

By now, the effect of globalization on people's diets worldwide has become a commonplace. Whether we consider European unease with McDonald's, Japan's increased interest in exercise equipment as American-style foods become more common, or Starbucks' dealings among African and Central American coffee farmers, we know that the food we consume and the food we produce journeys substantial distances over complicated terrain—not just geographical, but social, cultural, religious, and political as well.

In response to the endless complexity of globalized food production, distribution, and marketing, some people choose to eat foods culled mostly from their local "foodsheds"—attempting, however improbably, to turn the tide in favor of the local, heirloom, and artisanal against the waves of long-distance hybrids and ready-mades. This is not the only primitivist turn in contemporary food culture—others, among them adherents of what has been called the Paleo diet and those who eat primarily raw foods—seek a primeval, pre-cultural, authentically "natural" approach to eating.

Vegetables—seldom demonized, whatever the food fad might be—are frequently taken as objects of nature, not culture, a misunderstanding blown wide open in Evelyne Bloch-Dano's Vegetables: A Biography,translated from the French by Teresa Lavender Fagan. Drawing frequently from Claude Levi-Strauss' anthropology, from history, science, politics, literature, and especially philology, Bloch-Dano gives us the biographies of ten vegetables, detailing the ways humans have "tamed" them every bit as much as we have domesticated animals. Far from primitive,

"… vegetables are not as vegetative as we might think. They are born, they live, they die. Modestly, discreetly—they represent the most fertile encounter between nature and culture."

While we are aware that Mexican cuisine handles tomatoes differently from Italian—that vegetables differ across cultures in their preparation—we are frequently less aware of the histories that have brought vegetables to us. Bloch-Dano begins with the artichoke, domesticated in Roman times from wild thistles. In the movement, common to all vegetables, from wildness to cultivation, she sees the human tendency to culture-making:

"What, again, distinguishes us from donkeys? Donkeys are content with thistles; we prefer artichokes."

Indeed, as Richard Wrangham pointed out in his 2009 book Catching Fire: How Cooking Made us Human, to idealize a supposedly "primitive" diet is to miss all that is culturally and biologically important about how humans eat and why. Adhering to a raw diet requires near-constant chewing; calorically dense foods generally must be cultivated to be so and cooked for optimal energy benefit. Even the most humble, most seemingly "natural" of foods have long and frequently surprising cultural histories.

Cabbage, for example, was one of the first plants to be domesticated, perhaps 7,000 years ago. When Philemon and Baucis extend hospitality to Zeus unaware, they give him cabbage soup—the best they have to offer. And yet, "gradually, cabbage soup became a prime element in caricatures of peasant life, depicted as vulgar and stupid." Carrots, though they may vary in size and shape and be purple, yellow, red, or white, are generally known to us as long, slender orange vegetables, partially because Flemish painting typically represented them that way.

It is, of course, characteristic of culture that it should become to us as nature. Perhaps nowhere is this clearer than in the taboos surrounding certain foods—the Jerusalem artichoke, for example, which, as a new world food, was regarded in Europe as pig food, until the hardy tuber saved some lives during World War II food shortages (after which no one wanted to look at it again), finally being re-discovered as a "chic, 'vintage' food" to appear on the menus of great chefs. Bloch-Dano quotes Montaigne: "we call 'barbarism' that which we are not accustomed to." Indeed: for who could imagine French home cooking without potatoes, or Italian without tomatoes? Yet these—along with everything else you'd need for a good British pot of chili con carne—are all New World foods, with stories of exploration and exploitation to tell.

For readers interested in the history of food (not to mention adepts of cultural studies) Bloch-Dano's book is sure to be indispensable. Where else could you learn that 90 percent of the peas eaten in France are frozen, not fresh (frozen and canned peas not being stigmatized as "lesser than" fresh), while the pursuit of an ever thinner, ever fresher green bean inspired praise from writers as diverse as Thoreau and Proust and has led Europe to import tens of thousands of tons of them from Africa so that they may be eaten all year round?

As usual, the French title captures the spirit of the book much better. There, it's not Vegetables: A Biography, but The fabulous story of vegetables. And indeed it is!

Rachel Stone has written for Christianity Today, Flourish, catapult/*cino, and Creation Care magazine, and also for her local newspaper, The Suffolk Times. She blogs daily about food, family, faith, joyful justice (and the Bread of Life) from her home in Greenport, New York, with her husband, two sons, extended family, and assorted cats.