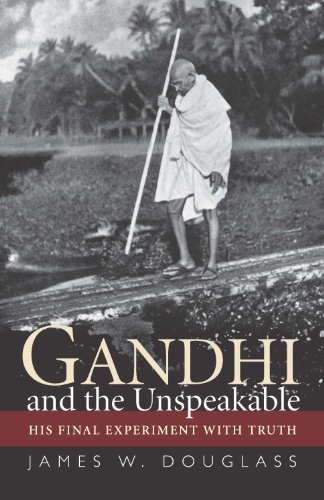 Gandhi and the Unspeakable

A conversation with Jonathan Wilson-Hartgrove
April 2012

A few weeks ago on Twitter, Jonathan Wilson-Hartgrove mentioned that he had an early candidate for Book of the Year: Gandhi and the Unspeakable: His Final Experiment with Truth , by James W. Douglass (Orbis). I sent Jonathan a message asking if he wanted to review the book for Books & Culture. Turned out he had already sent a review to Sojourners; that piece is now published (free registration required). Following is an email conversation with Jonathan about the book and why he regards it so highly.

Jonathan, what attracted your attention to this book in the first place?

In short, Jim Douglass. Leah and I met Jim on the way to Baghdad in 2003 and immediately knew we had met a saint. I am, of course, using "saint" in the common sense. He was one of those people who seemed to exude God's love. It was a tumultuous time to be in Baghdad, but being with Jim made us feel like, whatever happened, we were going to be OK. He made a deep impression on us.

When we got back from Baghdad, I picked up a few books Jim had written back in the '60s and '70s. They were books about Christian nonviolence that took seriously both theological conviction and practical application. I liked Jim as an author as much as I'd liked him as a person. I wrote to ask if he was still writing. Over the next several years, Jim introduced me to his meditation on what hope means in the face of the Unspeakable. I hadn't known Thomas Merton's notion of the Unspeakable, but it helped to name the forces I'd seen at work in Baghdad and in my neighborhood, in America's prisons and in our political systems. The people who help us to name the Unspeakable, Jim showed me, are the people who've followed Jesus' way of the cross to death, unveiling its power. They are, in Jim's words, "martyrs to the Unspeakable." So, this book on Gandhi is a deeply Christian reading of history. It is, I think, because Jim has a deeply Christian vision of the world.

Could you say more about what is meant by "the Unspeakable," and how Gandhi's story sheds light on this?

Merton wrote his Raids on the Unspeakable in the midst of the turmoil of the '60s. He was corresponding with friends around the world about the civil rights movement, the peace movement, the threat of nuclear disaster. He'd become a spiritual counselor to activists (including Jim Douglass). And yet, at the same time, Merton's superiors forbade him to write on political issues. In a fascinating way, this forced him to explore the spiritual dynamics of activism.

So, the notion of the "Unspeakable" emerges as a way of naming what can't be spoken—those powers that lurk in the silence, defying description and so paralyzing us all the more. Raids on the Unspeakable reads like an apocalypse. It's a prose poem, really. Out of context, it almost seems crazy. But it is a prayer at the heart of the world's dark night. In the midst of it, Merton names a bedrock truth: "Christian hope begins where every other truth stands frozen stiff before the power of the Unspeakable."

As a leader of the Catholic peace movement, Jim understood the importance of this hope. His book Resistance and Contemplation invited the movement to hold onto Christian hope, even as it was unraveling in so many ways. It's an important book. But even more important, Jim kept this hope alive in his life and work. He cultivated a practice of radical gospel nonviolence. This practice, more than anything, is what brought Jim back to Gandhi over and again.

What's fascinating, looking back, is that Merton's contemplative confrontation with the Unspeakable brought him to Gandhi as well. When he was working on Raids on the Unspeakable, he was also editing a collection of Gandhi's writings, poring over the extensive collections of a man who, like himself, wrote almost every day of his adult life. What Merton did in an anthology, Jim has done in a fascinating biography—to hold Gandhi's witness up as a mysterious icon of Christian hope vis à vis the Unspeakable.

From what you've said so far, a reader might not guess that more than half of the text of Douglass' short book is given to the central section, "Gandhi and His Assassins." In no small part, this is a detective story, akin to Douglass' previous book, JFK and the Unspeakable, offering a revisionist account of Gandhi's assassination. How does this project connect with the theme of the Unspeakable, and to what extent does a reader's reception of Douglass' book stand or fall with his narrative of state-sponsored murder?

Jim's first book on JFK was a book that almost never saw the light of day. Despite the fact that it was thoroughly researched for over a decade and skillfully crafted as a riveting tale, it faced the simple challenge you're suggesting: the synopsis sounded like another conspiracy theory. And conspiracy theories are, by definition, bad history.

But Jim likes to ask, "What if these are modern-day gospel stories?" We know, of course, that the crucifixion of Jesus was an assassination that involved conspiracy—political powers, religious intermediaries, a traitor on the inside. Conspiracy is always a part of human drama. But there's more to the story. For those of us whose lives have been claimed by the story, it's ultimately not about the conspiracy. It's about why Jesus died and why it matters.

Everyone knows that Gandhi was assassinated. Most people assume, as with many modern political assassinations, that this was the result of one deranged individual. But what if, forty years before he was finally killed, Gandhi met the mastermind behind his assassination at a debate in London—a debate about whether the best way for India to gain independence was violent assassination or nonviolent truth-force? What if Gandhi lived his whole life knowing that he would face an assassin and that the truth of his entire philosophy would be tested by his response? What if when he prayed to die with the name of God on his lips he meant that to be a prayer of grace for his assassin? These are the questions that Jim's telling of the story raises. His point isn't to re-write history. As best as I can tell, his facts do not contradict the facts in the conventional history. But they do highlight a truth at the heart of Gandhi's story that's hard to see if you don't consider these details of his life. They make it a particularly challenging story for the "war on terrorism," in which overt assassination has become a standard tool of American foreign policy.

Your point about ends and means reminds me of a statement by Gandhi that Douglass quotes near the end of the book. The context, as you'll recall, was a conversation between Gandhi and an international group of Christians visiting India in the fall of 1938. "The Christians," Douglass writes, "asked Gandhi what they should do with 'gangster nations.' They had in mind their threatening opponents in Germany, Italy, and Japan, though in the eyes of Indians and other subject peoples, the rulers of the British Empire might also have qualified."

Douglass then quotes Gandhi's response: "Ultimately force, however justifiably used, will lead us into the same morass as the force of Hitler and Mussolini. There will be just a difference of degree. Those who believe in nonviolence must use it at the critical moment." Do you agree with Gandhi's response, and, if so, do you believe this is normative for Christians, or is it one way to follow Christ faithfully, alongside other faithful paths?

When some Christians asked Gandhi to offer a Christmas message while traveling by ship between India and England, Gandhi summarized his understanding of Jesus this way: "Living Christ means a living cross, without it life is a living death." I'm a born-again evangelical who's been trying to understand what it means that I gave my life to Jesus ever since I was seven years old. Gandhi's summary of the gospel, I think, puts the message of the cross more clearly than any Christian preacher I've ever heard.

But I am struck by how Gandhi's summary fits with some of the church's best teachers today. I just finished reading Tom Wright's fine new book How God Became King. To use his language, the whole point of the gospels—the point that we've too often forgotten in Western Christianity—is the good news that Jesus has become King by way of the cross. And our vocation is to reign with him in this particular way. "The implicit ecclesiology of all four gospels is a picture of the complex vocation of Jesus himself," he writes. It is "to be kingdom-bringers … first because of Jesus own suffering and second by means of their own." The cross, Wright says, is our only means. He's saying what Gandhi said (and showed us): "living Christ means a living cross."

I have a great deal of respect for the just war tradition as a means of persuading rulers in the midst of Christendom to become less violent. The "truce of God" wasn't the kingdom, but it was a lot closer than the Crusades. In our own context, though, it seems to me that what we most need to witness to the power of Jesus' peculiar way in the world is a church that is committed to active nonviolence, not because we're sure that it will "work" but because it points to the victory of the Lamb who was slain. We are, indeed, called to be kingdom-bringers, living Christ as a living cross in the face of the Unspeakable.