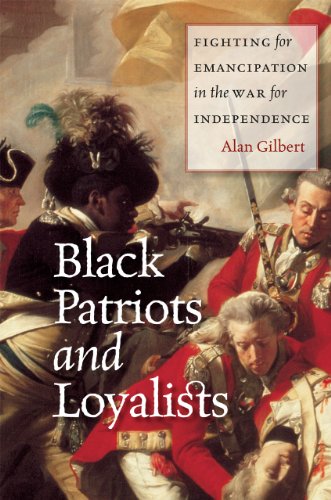 Black Patriots and Loyalists: Fighting for Emancipation in the War for Independence
Alan Gilbert
University of Chicago Press, 2012
392 pp., 30.00

Emancipation and the War for Independence

Alan Gilbert's Black Patriots and Loyalists: Fighting for Emancipation in the War for Independence argues that there were actually two American Revolutions: one by whites against British rule, the other by blacks against slavery. Gilbert, a professor in the University of Denver's school of international studies, has spent much of his career working on political philosophy and Marxism. In this book he transitions into the history of the American Revolution, highlighted by impressive research that demonstrates that black participation in both the British royal army and the Patriot forces was higher than we previously knew.

Gilbert struggles to demonstrate that there was a "second revolution" against slavery, however. As the study of African Americans' role in the Revolution has matured in recent years, we have learned that fears of slave insurrection churned in the southern colonies for much of the Revolution, and that whites shuddered when Lord Dunmore, the royal governor of Virginia, offered freedom to slaves who ran away from their masters and enlisted with the redcoats. When given a choice, many American blacks threw in their lot with the British and became part of the Loyalist diaspora, as Maya Jasanoff's brilliant Liberty's Exiles (2010) and others have demonstrated. But there was no full-fledged revolution against slavery in America—at least not in any normal definition of that term.

Gilbert is also given to presentist descriptions of Revolutionary-era "racists" versus "abolitionists." You might get the impression that his story is an early version of recalcitrant Klansmen fighting against civil rights leaders, or against the Students for a Democratic Society, which Gilbert tells readers he joined in the 1960s. Indeed, Gilbert describes himself an "antiracist" who has "no sympathy for racist cant." In today's academy, you don't often come across authors who feel the need to mention that they're against racism.

Thomas S. Kidd is Senior Fellow at Baylor University's Institute for Studies of Religion, and the author of Patrick Henry: First Among Patriots.