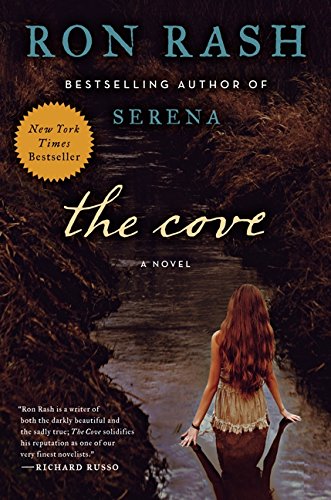 A new novel by the author of "Serena."

You are walking to your car through a secluded parking lot. Out of the corner of your eye, you glimpse a loitering youth whose racial profile differs from yours. Before you are able to sort truth from fiction, you visualize your impending doom, grasp your keys (like little knives) between your fingers, and quicken your pace.

Prejudice. We're immersed in it, whether we know it or not. We hold opinions—racial, religious, sexual, and political—that are deeply embedded and not easily erased.

Although prejudice is not the sole theme of The Cove, it is a significant one, since the novel shows how little we've changed since World War I. True, we may have signed elaborate laws and designated special holidays for those of us treated unfairly, but in our day-to-day life, we've lived history differently, mainly because of our stubborn generational brainwashing. Fear has something to do with it, as well as ignorance. But we already know this—as head knowledge anyway.

Never heavy-handed, always brutally honest, Ron Rash tells the story of siblings—a brother and a sister—living in a shadowy, dank cove not far from the small town of Mars Hill, North Carolina, during World War I. Hank has returned from war, angry and bitter, missing a hand. He woos a local girl but quickly realizes her father doesn't believe he can take care of her. Hank's sister Laurel, believed by the town to be a witch because of a birthmark, has done the dutiful thing after their parents died, and kept the homestead going. They attempt to cobble together a life for themselves.

The appearance of a vagrant in their forest changes everything. The man carries three things: a flute, which he plays beautifully; a note, which states his name (Walter), adding that he is mute and must get to New York; and a medallion with an inscription Laurel doesn't understand. The mystery of his presence delights Laurel. Walter is the first person—other than Hank and Laurel's childhood teacher, Miss Calicut—to listen to Laurel, to look her in the eyes, unafraid. Laurel's heart blossoms with the possibilities.

A good story always needs a nemesis. Back in town, Chauncey Feith, an enthusiastic recruitment officer, resents the town's perceptions of him. True, his father's political connections have kept him off the real battlefield, but doggone it, his patriotism and uncanny ability to rally and train strong young boys to fight the filthy Germans cannot be contested. He'll show them, every one of them, and they'll be sorry they ever thought otherwise. He lights the fuse in the story, figuratively speaking.

As I mentioned, prejudice is not the only theme running through The Cove. There is another, and that is each individual's innate desire to be loved, accepted, noticed. The sweetest, most heartbreaking words in the book are spoken by Laurel, after Walter has played his exquisite silver flute. " 'If everyone could make sounds that beautiful, we'd never want to speak,' Laurel said. 'We could just call to each other, let each other know we weren't alone.' " Her brother's response? " 'That's a pretty thought, sister,' Hank said, 'but I expect there'd still be plenty who'd rather use that silver to bash each other's heads in.' "

I cannot give more details without ruining the shock and surprise of the novel's unfolding, but I would like to mention what Rash is superb at, and why you should pick up his books, if you haven't already. Rash writes raw humanity, no sugarcoating here. Truth oozes from the pages, and this is a good thing, because you trust Rash; you believe he'll level with you. His characters' internal conflicts drive the story so organically that you trust both the path and ending. The characters could behave no other way. It's devastating. It's sad. And yet you know that, somehow, you could be any one of them, and the very thought knots up your stomach and shivers your nerves.

Don't get me wrong. Reading Rash is not unpleasant. He has built his Appalachian world so expertly—with quirky turns of phrase and idiomatic dialogue—you're mesmerized. He grew up in North Carolina and teaches Appalachian literature and creative writing at Western Carolina University, so he's writing novels set in his own backyard. He's been compared to John Steinbeck and Cormac McCarthy. He's been a PEN/Faulkner Award finalist twice, an O. Henry Prize recipient twice, and he received the 2010 Frank O'Connor International Short Story Award. He's qualified, one hundred times over.

And if you associate Rash's neck of the woods with your long-ago viewing of 1972's Oscar-nominated Deliverance—chockfull of inbred hillbillies who play a mean banjo, cook up some wicked moonshine, and harbor odd sexual hankerings—then all the more reason to read The Cove. Rash shines a glorious light on how alike we all are, and how doomed we are to repeat history if we don't wise up.

Elissa Elliott is the author of Eve: A Novel (Bantam).