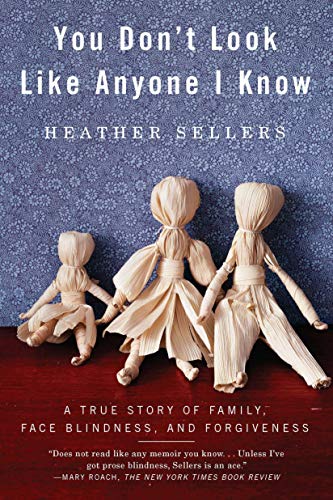 You Don't Look Like Anyone I Know: A True Story of Family, Face Blindness, and Forgiveness
Heather Sellers
Riverhead Books, 2011
368 pp., 17.0

Heather Sellers describes a situation that prompts many memoirists to write: "One day I went home and turned on the lights, and began to look at my childhood. Gradually I could discern what was, and what was not."

In Sellers' case, the issue of discernment entails a particular emphasis on the literal act of seeing—her memoir, You Don't Look Like Anyone I Know: A True Story of Family, Face Blindness, and Forgiveness, traces her discovery, and eventual diagnosis, of prosopagnosia, a neurological condition that prevents Sellers from reliably recognizing people's faces. It is a condition that gives Sellers a metaphor for reading her life, though the path to this kind of illumination is grinding, ambiguous, and isolating. But Sellers recounts her story, and the difficult events that have marked it, with a clarity that she wishes for everyone, a clarity that brings us to love "in spite of the greatest odds."

You Don't Look Like Anyone I Know opens, as classics do, in media res; Sellers is taking her boyfriend and his young sons to Orlando, her hometown, where she will split her time between giving a reading and introducing Dave, Jacob, and Junior to her parents. She is initially excited at the prospect of visiting her parents, who, though strange and difficult, should share her excitement, her success, her desire to marry David and raise a family. She is so excited that, as she makes her way through the airport to greet David, she wraps her arms around another man, one who, she laughs, looks just like David. But as she gets closer to her father's house, fear edges to the surface:

"I knocked, hard. I rattled the latch, and the door just opened. I could hear snoring …. I did not want to go farther."

In the house, Sellers can hear pornography playing softly in another room. The furniture is mismatched, or missing; mail is piled up, unread. Sellers takes David and the boys away, shocked at both the state of the house and her inability to recognize the situation for what it is: why would she have thought that things would be different?

At Sellers' mother's home, the heat is blasting and the windows are nailed shut. Her mother is a whirlwind of anxiety, pacing around the house, one moment correcting the boys' grammar, the next asking her daughter for opinions on "window treatments." When David and the boys decide to leave, Sellers is faced with a story that unwinds both backwards and forwards, her childhood and her current life cast into a searching, piercing light.

The memoir bounces between recaptured memories and current events. One strand of the narrative recounts Sellers' early family life, while a second strand traces her weakening relationship with David, her increasing anxiety, and her continued episodes with face blindness. It is the prosopagnosia that twists these narratives together; Sellers fears that she has a mental illness, that the chaos of her parents' behavior propelled her into a vague, undefined kind of madness, one that keeps her from greeting colleagues, recognizing friends, feeling in control of her mind and life.

Prosopagnosia, as it turns out, is not a mental illness, not like the paranoid schizophrenia that Sellers finally claims as an explanation for her mother's behavior. The condition, both a genetic inheritance and an end result of Sellers' bewildering childhood, comes as an inability of the brain to put together the parts of the face; Sellers knows who her friends are, but when she sees them, noses and mouths don't register as belonging to that particular person. Even her mother's face is something that Sellers cannot visualize. When she tries to describe what she "sees" when she thinks of her mother, she can only describe an outline, an idea:

"I can see her … but I can't see her face. It's like it's there but just out of reach. Nothing looks missing, it's not foggy, it's just that I can't get any specific ideas …. It's like the idea of her face."

Episodes of Sellers' face blindness punctuate the memoir with a taut, instant panic. Neighbors, colleagues, and her therapist make the same claim to Sellers: "I saw you at the store, and you ignored me. We've met before. Why are you so rude?" The intense confusion that Sellers carries prompts her to live on the margins, shopping late at night to avoid encounters with people she does not remember meeting. Even the intersections of Holland, Michigan, where Sellers lives and teaches, taunt her with their vague repetitions, Sellers' afternoons spent racing around the grid, her confusion a palpable misery.

Sellers' prose serves her state of mind well: clear and direct, laden with physicality, her words shape and fill the characters that move and drive her life. We see her mother, huddled behind a steering wheel, checking license plates on the highway, fearing government spies. We see her father, loud and drunk, pulling Sellers up to dance at a restaurant, women's nailpolish gleaming on his fingers. If Sellers cannot put together the components of a face, she certainly can piece together the world of both her family and her inner life with elegance, fraught and tense as the prose reveals her world to be.