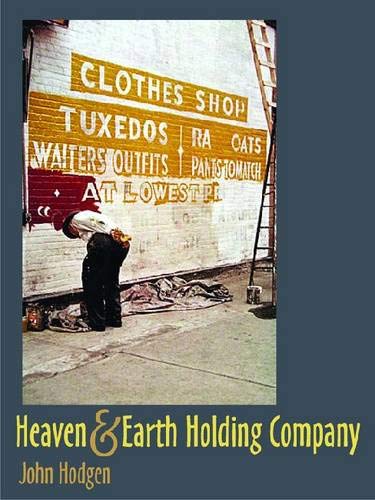 John Hodgen is the kind of poet who will mystify and amaze most readers. That is, one of substance, imagery, and humor, somehow sharp-tongued, gentle of spirit, and culturally keen all at once. The balance itself mesmerizes, the poems both brimming and contained, unfettered but oddly formal, electrified but poised.

In his fourth volume, Heaven & Earth Holding Company, Hodgen marches across centuries and continents much like he strews colloquialisms, pop-speak, similes, metaphors, end-rhyme and internal rhyme across the wide page. He treads newly upon the most promising topic of all, the human condition. Let me say here that even though Grace, his previous volume, was awarded the Donald Hall Prize in Poetry by the Association of Writers and Writing Programs, I find his voice in this book by and large even more assured.

The volume's first poem, "Undiscovering America," serves both as a strong opener and example of the style and tone to follow. It depicts an outlandish group of explorers assembled for a photo shoot, offering a humorous catalogue ("Cabot saying cheese … dodgy DeSoto … coon-skinned Zebulon Pike peeking out") but nuanced, too ("and lonely Vespucci at the end of the row, mumbling to himself his mother's regrets, Amerigo, Amerigo"). In the second stanza, there's an exodus of the explorers, "going back, going home," as if a film of several centuries is being rewound and they're all "sailing backward … in their tall ships," sailing, in the four final rhyming lines, "past the Pathfinders and Explorers backed up on their way to the mall, / till their ships look like toy boats, toy boats, till their ships are so small ,/ till they sit at the edge of the world, till they fall, / saying this is not what we were looking for, this is not it at all."

Hodgen adds emphasis and texture to the implied dismay and disgruntlement here by borrowing from Eliot's "The Love Song of J. Alfred Prufrock": "That is not it at all, / That is not what I meant, at all." Here and elsewhere in the volume, Hodgen is doing what poets have been charged with doing, giving us a fresh way to grieve, or delight, or reflect. And Hodgen's real feat is in prompting readers to do all three, often at once. The poems in Heaven & Earth Holding Company feature slender, compelling narratives which underwrite their meatier lyric meditations. This, too, is a rather stunning hybrid effect, and Hodgen seems to further push stylistic boundaries by running his lines out long, often right to the edge of the page, but using internal and end rhyme as well as alliteration and other sound-rhythm techniques, rendering the long lines definitively poetic. (How do we know for sure? They don't read like prose.) He also deploys lists and piles up descriptions rooted in a single phrase: in "Undiscovering America," not only does he list the explorers but also their ships; he uses the phrase "past …" four times in three lines and "till …" four times in two lines. The effect is a burst of momentum, highlighting what's at stake, which is, in part, articulating what might possibly be wrong, how we got here, why we stay. It leaves one nearly breathless, the hyper-naming having achieved at least one strange irony: you will want to hold still, to sit with the havoc and ponder, even if there isn't sense to be made of it.

Hodgen writes about a Vietnam vet who now teaches peace studies; Alexander Bell's obsequious Watson; the sleepless and slightly insane Mary Todd Lincoln; Bob Dylan in 1959; a trickster on Bourbon Street wearing a cap that says FEMA, My Ass. With these and a dozen other figures as leaping-off points for focusing on and evaluating the human condition, Hodgen has a strong sense of the culturally bullied, those oppressed by what's typical: we are a confused and troubled people, we always have been, domestic luxuries notwithstanding. We are chagrined and beleaguered, even as we bully and oppress others (unawares or perhaps not so). And so it is that Hodgen resists easy answers to our predicament—those on offer from screaming street evangelists, for example, or the unbridled consumption of resources and pleasures.

Even as Hodgen questions what is glib, unexamined, or plain old lousy, he does not, to his credit, take his own vexation too seriously. His is not a wholly bemoaning, didactic poetic. Both in content and form, Hodgen leavens heavy matter with whimsy, weaving in allusions, puns, rhyme, and playfully prolix lists. So in a poem like "Killing Mice, December," after detailing different ways to kill the mice in his home ("I do not use the Hav-a-Heart …. Lord knows I do not have a heart") and lauding the traps he's selected ("the tiny Gericault Medusa raft"), we find these lines: