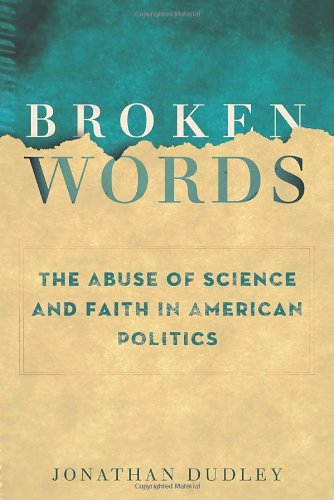 The scandal of a post-evangelical mind.

In 2004, reflecting back on his 1994 The Scandal of the Evangelical Mind, Mark Noll perceived some auspicious developments: " "increasing engagement between evangelicals and Roman Catholics," an "ongoing renascence of Christian philosophy," evangelical colleges "season[ing] their sectarian certitudes with commitment to 'mere Christianity,' " breakthroughs in engagement with the sciences, "multiplying Christian presence in the nation's pluralistic universities," and serious efforts in Christian publishing." Noll's hopefulness was lost on Randall Balmer, who, two years later, excoriated evangelicals for being dumb and hypocritical, to list but two of their lesser vices, in Thy Kingdom Come: How the Religious Right Distorts the Faith and Threatens America.

Jonathan Dudley, native of Grand Rapids, Michigan was raised in the evangelical setting decried by Balmer. He learned, growing up, about the "big four": "that abortion was murder; homosexuality, sin; evolution, nonsense; and environmentalism, a farce"—and, from some in his community, that his eternal salvation hinged on sharing these views with others. All this would be bad enough, but add to this injury the insult of how cocksure evangelicals are of everything and the immoderation and partisanship that follows such certainty and you get the nasty and oppressive right-wing movement we've known pretty much since Francis Schaeffer's politicization in the mid 1970s. That is to say you get the combined ignorance and arrogance that characterize contemporary evangelicalism according to Balmer and, now, Dudley.

Having earned his bachelor's degree in biology from Calvin College and his master's degree in religion from Yale Divinity School, Dudley has not only been liberated from the shackles of his evangelical upbringing, he has found himself "in a unique position to dispute evangelical thought" on biology and the Bible. Thus, Broken Words: The Abuse of Science and Faith in American Politics, and this reformer's thesis: "Evangelicalism has defined itself by weakly supported boundary markers"—the "big four" non-negotiables identified above—"which are justified by a flawed understanding of biblical interpretation and maintained by suppressing those who disagree. Further this fact has significant implications for American politics."

I say "reformer", but that now requires some qualification. In his final chapter, Dudley speaks of reforming neo-evangelicalism or, failing that, starting "a new kind of evangelical Christianity … worth believing in. It hasn't existed for a long time now. But it might exist again someday—hopefully soon." That hope has since dissipated, apparently, as he tells us on his webpage that he no longer considers himself an evangelical Christian.

Readers who share with Dudley a dismay at the alliance of Christianity and right-wing politics, even readers very impressed with Dudley's undergraduate biology degree and his master's degree from Yale Divinity School, may nevertheless find it surprising that Dudley thinks himself uniquely positioned "to dispute evangelical thought," especially given that his arguments are rather derivative. One might helpfully ponder, in fact, just what is new here. Dudley's conceit, it would seem, is his understanding of biblical interpretation.

Dudley argues that the Bible does not teach that human life begins at conception, that Paul's arguments about the "unnatural" acts of homosexuality should be read alongside Paul's claims about the unnaturalness of long hair on men, that the Bible is not nearly so green as evangelical environmentalists maintain, and that the Bible is uninterested in evolution. Why, if the Bible really does not speak to any of these issues with a clear and compelling voice, are evangelicals (and others) so sure that it does? Because we fail to recognize the implications of neo-Kuyperian epistemology for biblical interpretation. We read into Scripture what we want, for other reasons, to find there. The problem is the "naïve belief in lens-free biblical interpretation," the failure to recognize that we bring to our reading of Scripture "a very human set of assumptions, cultural values, and interests." The problem is that we fail to recognize how our experiences form our interpretation and how contemporary experiences of the world should form biblical interpretation.

Exactly how the realization that all interpretation is through the lens of experience is helpful in matters of moral discernment, though, is far from clear. Such an acknowledgment might very well lead me to a greater humility with respect to the truth of some of my views; but it might not. And, of course, experiences themselves require interpretation, and we bring our lenses to this interpretation as well. In short, Dudley's account of interpretation and experience ought to provide more than just a baptized relativism, however welcome the increase in toleration and humility that might follow from such relativism.

Sarah claims that I mischaracterize Dudley’s position on biblical interpretation. But it isn’t clear to me how Sarah’s interpretation of Dudley differs from mine. Dr. Erwin Williams, PhD in Christian Theology, and current and future Republican voter, assumes that I am a hit-man for the Religious Right. We have nothing to fear from the Religious Right if they employ hit-men who have never voted Republican in national elections (and don’t intend to change that in the future!) who are as critical of the rhetoric and arguments of the Religious Right as they are of their now post-evangelical critics. But perhaps these readings of my review do illustrate Dudley’s claim as well as mine—we do have a tendency to import our own theology and experience into the reading of the text, as Dudley says. But if that’s the whole story, then we have abandoned the text for our own interpretations and, so far as I can tell, silenced the voice of God speaking in Scripture. That is not good news.

Does the review make “demonstrably false charges about Dudley’s knowledge of evangelical bioethicists”? I write, “Dudley seems completely ignorant of or uninterested in the moral thought of evangelical scholars of bioethics (generally folks with some affiliation with the Center for Bioethics and Human Dignity), scholars like Scott Rae, Dennis Hollinger, John Kilner and Ben Mitchell.” I stand by that claim. Dudley has a good knowledge of what evangelical thinkers were saying about abortion 25-40 years ago; but the closest he comes to exhibiting an interest in what contemporary evangelical bioethicists think is references to the primer of non-evangelical conservative Lutheran Gilbert Meilaender and (probably) evangelical James Peterson.

Continuing his practice of attributing to me things I do not claim, Stacey says I “falsely portray the book as derivative of Randall Balmer’s.” I do claim the book is derivative, though I nowhere identify from whom or what. I can only hope that Mr.Stacey has read Dudley’s book more carefully than he has read my review.

Why did I mention Dudley’s undergraduate training in the sciences and not his current enrollment at Hopkins? Because that is exactly what Dudley mentions when he states his credentials, the reason being that when he wrote the book he was not yet a student at Hopkins. If this is misrepresentation of his credentials, then you should complain to Dudley. Why do I claim that Dudley has “only” a BS and an MA? Because I don’t; you won’t find that “only” in the review.