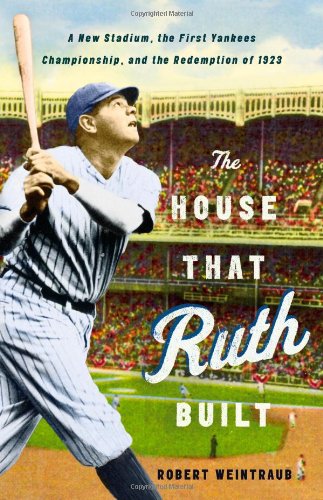 The House That Ruth Built: A New Stadium, the First Yankees Championship, and the Redemption of 1923
Robert Weintraub
Little, Brown and Company, 2011
432 pp., 26.99

The House That Ruth Built

I've always enjoyed history books that reveal new layers of a topic or era that I thought I knew; the sense of surprise is heightened, and the chastening of my historical hubris is instructive. Robert Weintraub's new book The House That Ruth Built has given me a threefold jolt! I thought I knew New York Yankees (and especially Babe Ruth) lore. I thought I knew the milieu of the Roaring Twenties in America (how many times have I taught The Great Gatsby or held forth on modernist poetry with cagey confidence?!). Shoot, I thought I knew even the more obscure narrative of the original "Muggsy," longtime Giants manager John McGraw (the most famous resident of my rural homeland, Cortland County, New York). Well, I'll confess the "haughty spirit," but in this case, the "fall" caused by Weintraub's rich and detailed account was pleasant indeed.

Weintraub's thesis is that baseball changed utterly during the 1923 season, changed as profoundly as Elvis' appearance on The Ed Sullivan Show altered American popular music, divisively and inexorably. Old Baseball was represented, embodied, and championed by John McGraw, who had managed the Giants since the turn of the century and perfected the "scientific" approach to the game. New Baseball was vigorously and prodigiously embodied in Babe Ruth, once a young, shrewd left-handed pitcher on the dead ball-era Red Sox, but now the slugging star of the Yankees and the first true superstar. This all seems relatively familiar—toss in the Black Sox scandal of 1919, and you have the usual script of baseball's maturation (following the 20th century's tardy arrival after World War I). But here Weintraub problematizes things a bit. As 1923 dawned, the Babe had finished three seasons in New York. He was the toast of the town, but he had never yet vanquished McGraw. In fact, the Giants' skipper had humiliated Ruth in the World Series the prior two seasons, calling every pitch using his cryptic bat grip signals from the dugout. Likewise, adding a very real insult to injury to the Yankees franchise, the Giants also functioned as landlords to the Babe and company, as the Yankees had no stadium of their own, and McGraw himself, as a minority owner, pocketed substantial revenue generated by the very slugger he deplored.

But the omens (or coincidences) heralding change begin to mount in Weintraub's crafty construct, as the death of Wee Willie Keeler on January 1, 1923 (the dead ball sage whose famous motto was "hit it where they ain't") set in motion the transition. During that long winter, the Babe was at his New England country house drying out and getting fit (though he apparently amassed fewer logs split than automobiles crashed), so the plot for the Yankees was carried forward by the owners, Colonel Jacob Ruppert and Colonel Tillinghast Huston, who were building "The Yankee Stadium" on a scruffy lumberyard in the Bronx. The owners couldn't control the play on the field, but they could strike their splendor unknown to baseball before (and perhaps even after), with the neo-classical balustrades and arched entrances utterly eclipsing the ramshackle stadiums of the time, including the Giants' Polo Grounds, within walking distance across the Harlem River. Construction proceeded at a fever pace, especially as Opening Day approached, and workmen were still present working on the bleachers during the game. In a sign of things to come, the Babe launched an enormous shot to right field to christen the park.

The short porch to right, at about 295', was custom-made for the Babe, though the rest of the dimensions were mind-boggling, as Babe found out the first week: "Ruth had hit four balls more than 450 feet and had only one homer to show for them." Incidental to this data, but very much part of the book's charm, are Weintraub's descriptions of other aberrant ballparks of the day, such as the Phillies' home, the Baker Bowl, with a right-field fence "which was a mere 280 feet away from home but towered 60 feet over the field (by contrast, Fenway Park's famous Green Monster is 37 feet tall)." More startling to me was the revelation that the Polo Grounds sported not only short porches (under 300') in both left and right, with center over 450' to the wall, but also an "outfield [that] was sunken some eight feet below the infield, forming what was called a 'turtleback.' When John McGraw stood in the dugout , he could see only the top halves of his outfielders." Ah, the wacky days when ballparks sprung from idiosyncratic planes and plumblines!

The entire 1923 season, for both Yankees and Giants, is scanned by Weintraub, but sketchily, at the quick-step, as a necessary prelude for the October showdown. A feel for the wild travel regimen of the Twenties ballplayer emerges (including the side "jaunts" of the Babe, both to carouse and the visit sick children, sometimes in the same calendar day!), but the important work for the author is in setting up the secondary and tertiary characters. We learn of the young Lou Gehrig, fresh from the college fields at Columbia, who gets a brief look in the midsummer of '23. We learn of Wally Pipp, the man Gehrig would replace in 1925 to begin his legendary streak; Pipp had been a mainstay of the team since 1915 and a solid power-hitter himself (plus, he grew up in my adopted hometown of Grand Rapids, Michigan). On the Giants side, McGraw's savant shortstop Frankie Frisch, the "Fordham Flash," rears up as an Twenties alpha-player, and the clown-prince, Casey Stengel appears as an over-the-hill outfielder who becomes McGraw's unexpected protégé. These and a dozen other players fill out the tableau of human interest, yet it is Stengel who emerges as the antagonist to Ruth when October rolls around, in a weird confluence that disorients and reorients one's sense of baseball history.