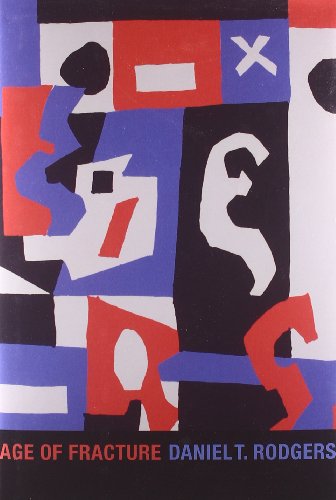 How Americans found themselves at an impasse.

To stop inquiry at the revelation of the ironic is to stop too soon. That is the conclusion that emerges from a reading of Princeton historian Daniel T. Rodgers' potent new interpretation of late-20th century American intellectual life, Age of Fracture. It's a book that captures vast swaths of consequential debate and that will certainly stimulate more of it—as the opening sentence above attests.

Rodgers' understanding of both our age of fracture and his discipline, intellectual history, centers on the centrality of metaphor. "What matters," he writes at the outset, "are the processes by which the flux and tensions of experience are shaped into mental frames and pictures that, in the end, come to seem themselves natural and inevitable: ingrained in the very logic of things." It is thus not issues or policies or political figures that he sees Americans most momentously battling over but rather a "contagion of metaphors." This premise makes his own selection of a defining metaphor for the book and historical period particularly salient. Why choose fracture? Why have we fractured?

Ronald Reagan, counterintuitively, is the figure to whom Rodgers turns to help the reader into this thicket of language, meaning, and action. Often depicted as the catalyst of a new era of national unity, Reagan turns out to be in Rodgers' reading an agent of fracture—and this ironic turn prepares the reader for what is, chapter by chapter, to come. In the decades following World War II, Rodgers argues, American social thought was thickly social: freedom implied duty, and historically rooted institutions were central to securing it. But for all the mystique of solidarity and historical continuity Reagan aimed to create, in his actual speeches and policies, contends Rodgers, we witness "the eclipse of words thick with a sense of society, history, and responsibility by the new rhetoric of psychic optimism." Reagan's idealized American seemed free from inherited social forms of any kind and released from the pleasures and burdens of "common action"—evidence, among other things, of "the new, oddly unconservative American conservatism."

Crucially, the "disaggregating"—a keyword in this narrative—that was occurring in and through Reagan's politics was also present in everyone else's. "The fracture of the social," Rodgers claims, "was, in the end, as much a product of left-leaning intellectuals as it was of the new intellectual right." Academic leftists, for instance, on a determined quest to understand and unmask power, ended up elaborating notions of power that were strangely immaterial and individualistic, harbored not in institutions but language, "in meaning itself, in the very tremulous stuff of culture"—and thus very difficult to counter, politically or personally. Feminist intellectuals, convinced of the possibility of a more dignifying solidarity, actually devoted themselves to theories that left "every gender certainty shaken" and the notion of a coherent self itself incoherent. Unexpectedly, "hybridity and contradiction" became something like a social ideal: Lady GaGa unleashed. Even communitarian champions of civil society, so visible in the 1990s, rarely imagined a "social citizenship as extensive as the nation itself." In the end, Rodgers poses as an altogether sensible question: "With all larger categories reduced to fragments, was there anything left but individualistic politics?"

Apart from his assumption that the battle over controlling metaphors in large part yields the history of the age, master theories of any kind are absent in Rodgers' own social imaginary. The closest he comes to suggesting a deep reason for this propulsion toward fracture is his foregrounding of the dominance of the market both as an economic presence and (what I can only call) a spiritual hope. What we have experienced, he believes, is "a culture reshaped in the choices and present moment preoccupations of a market-saturated society"—something mighty enough to have "transposed the frame of argument" across discourses, disciplines, and arenas.

Rodgers' narrative of this transposition is utterly compelling, a true tour de force. In his telling, an unprecedented convergence of economic, political, and legal thought created a dauntingly strong intellectual vortex, as sophisticated theorists touting "highly idealized markets" stepped forward to provide the procedural norms for an expansive technocracy desperate to move forward amidst great national instability and diminishing cultural coherence. The new thinking about markets became (in the face of any number of institutional and social difficulties) a "compelling instrument of simplification" and, inevitably, turned the market itself into "a metaphor for society as a whole." Rodgers' quotation from Stephen Breyer in the early 1980s strikingly reveals the spread of this economic conception of reality into the sphere of law. "The body of economic principle," Breyer opined, "offers objectivity—terra firma—upon which we can make decisions"—a telling formulation. Breyer and his ilk may have achieved a sense of solidity in their field, but Rodgers contends that Americans themselves, under the aegis of market-think, were reduced to an "array of consenting, voluntarily acting individual pieces."