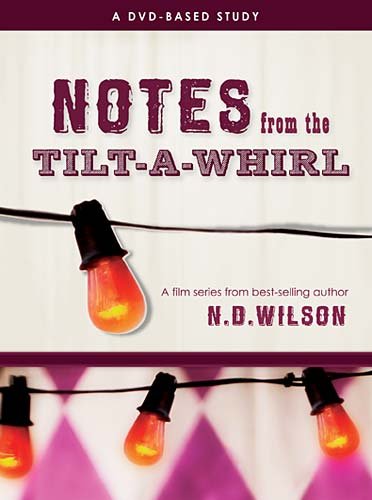 Notes from the Tilt-A-Whirl

Truth is too beautiful to hedge, or handle in a boring fashion.

One online retailer slaps this product with the prosaic label, "a DVD-based study." It's true that in 13 chapters running roughly four minutes each, N. D. Wilson recites passage or riffs on themes from his 2009 book of the same title (both via Thomas Nelson). But for the uninitiated, a merely descriptive review would sell Notes short. So the back cover and inset tell us that this audio-visual kaleidoscope is "a cinematic treatment of a worldview," or a "bookumentary." Imagine 51 minutes of an earthier Nooma video infused with an ethos of postmillennial confidence and injected with the steroids of Christian orthodoxy and Chestertonian Orthodoxy. Ponder all possible manifestations of "A Portrait of the Kuyperian Artist as a Young Apologist."

Like the text it reprises, the DVD is an artistic, soul-chasing, face-slapping journey, a high-speed tour that consistently surprises and delights. The seasons of the year provide some narrative flow, and the chapters generally pick a theme and stay on it for a moment or two. But from start to finish, we're in an artist's world on an artist's terms. Boredom and ponderous argumentation find no asylum here. Wilson somehow manages to be contemporary without the help of manscaping, faux-hawks, trendy eyewear, megachurch worship pastors, or glossy Christian leaders. The most prominent artistic guideline seems to be "wordsmithery with no waffling." Wilson occasionally slows the pace to let us breathe, but then hurls us along again to marvel at an insect, mourn the lost, or ponder the messages of snowflakes and hedonistic nihilism.

If the visual and literary artistry shine, an even more prominent feature is the thoroughgoing earthiness that regards the world—our "Tilt-A-Whirl"—as a dissertation to ponder, a party to join, and an invitation to worship. Commenting on Revelation, Eugene Peterson observed that the early church countered boredom—which they recognized as the Devil's work—with worship, awe, and wonder. That's precisely Wilson's plan. Every insect, every quark, every vista, every life and death is a fairy tale from the mind of the Author, an opportunity for an artist to harvest a world of meaning.

This commitment to earthiness gives Wilson a way to measure atheism, nihilism, secular humanism, and functional or full-fledged deism. Many "thinkers" are content to ponder philosophy from a comfortable armchair. But Wilson demands to know whether these ideas "ship" (I'm borrowing Andy Crouch's term) in the real world. He cuts to the chase: they don't. While artists often illustrate the human tendency to tolerate or celebrate the ridiculous and irrational, this artist throws presuppositionalist apologetic punches (think Tim Keller's Reason for God), then jabs with arguments from beauty or design.

Wilson doesn't merely offend sophist sensibilities. He runs over them with the mirth of Tolkien's elves. "An anthill can teach us more than Heidegger," we're told. Wisdom may commend knowledge of the philosophers, but she is rarely in their company. Rather, she manifests herself in anthills. I'm reminded that Scripture permits us to read Heidegger and commands us to consider the ants.

What's more, Heidegger "was a Nazi" and thus "can be safely dismissed." Perhaps that risks guilt-by-association or chronological snobbery. But Wilson doesn't place the works of Heidegger & Company on the firepit of banned books. ("Read them once, put them on a shelf," he advises.) He judges them to be boring, irrational, unhelpful, and incapable of leading in a moral direction. In a world of entertainment and pragmatics, could any assessment be more damning?

Among other takedowns, narcissism gets the sword. We tend to see ourselves as sympathetic characters in "an indie film about us and our idiosyncracies," but "you might not be the star," and from the vantage point of those we've harmed, we might not even be sympathetic characters. Rejecting God because of the problem of pain? The lead character of (say) Slumdog Millionaire shouldn't look at the director and say "Not fair!" halfway through the story. "If you look at the world as art, tension makes sense," Wilson opines.

That's just a glimpse. Wilson revisits themes in later chapters and more fully in his book. Still, it's no slight to note that a good bit more needs to be said. Neither book nor DVD will replace sacrificial late-night chats of the sort where Tolkien led Lewis to mere Christianity, although they might well prompt them. Many conversations with unbelievers and doubters and skeptics will need a different tone. But within the limits of the medium, Wilson provides an invigorating push in the right direction. Questions have a role to play, and they may not all get answered. But questions don't lead to joy and redemption until the possible answers are laid on the table, and someone has a royal flush. Truth spoke, truth ships, and truth is too beautiful to overlook, hedge, or handle in a boring fashion.