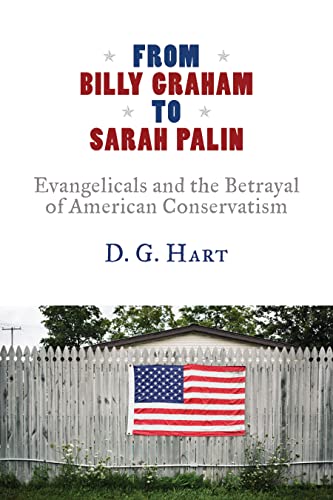 From Billy Graham to Sarah Palin

A timely corrective for evangelicals.
November 2011

Everyone loves an iconoclastic thesis, the kind that elicits a flabbergasted response of "Oh, really?!" Three immediately come to mind: in an essay on military service, theological ethicist Stanley Hauerwas argues that gays (as a group) are morally superior to Christians (as a group); in God's Battalions, sociologist Rodney Stark argues that the Crusades were a justified war waged against Muslim terror and aggression; and in Defending Constantine, theologian Peter Leithart argues that the heresy of Constantinianism should not be named after the historical Constantine.

Add this eyebrow-raising thesis to the mix: in From Billy Graham to Sarah Palin: Evangelicals and the Betrayal of American Conservatism (a book whose title and subtitle should have been switched), historian Darryl Hart argues that "the evangelical temperament is inherently progressive." Despite being the largest single voting bloc in the Republic Party, evangelicals—owing to their religious and moral idealism—are no more fitted to traditional conservatism than an armadillo is suited to Antarctica. Currently a professor at Hillsdale College, the premier academic enclave for conservatives, and prolific author of such books as A Secular Faith: Why Christianity Favors the Separation of Church and State, Hart offers a historical account of evangelical political reflection since World War II.

Hart then turns to traditionalist conservatives (Russell Kirk, Roger Scruton, Michael Oakeshott, Mark Henrie, Patrick Deneen) for an alternative to the "redemptive utopianism" that prevails among evangelicals. In Hart's account, latter-day evangelicals, for all their internal differences, closely resemble their revivalist ancestors, stitching a patchwork quilt of American exceptionalism and providential benediction, patriotism and piety, evangelism and social action. "Deep within the soul" of members of the Religious Right, Hart observes, beats "the heart not of a Burkean conservative but of a Finneyite activist." If we follow the levels of reading in How to Read a Book, Hart has reached the highest level as a syntopical reader, placing multiple books in relation to one another and constructing a new and perceptive analysis on the subject. However, I do question how much can be extrapolated about the political ethos of evangelicalism—a remarkably pluriform movement—from literary evidence alone.

According to Hart, evangelicals forged a third way between the accommodationist posture of mainline Protestants and the separationist posture of fundamentalists. They found their political calling in the postwar years when the character of the United States was tested in the crucible of secularity. Animated by a transformationalist vision to reclaim America as the new Israel or redeemer nation, evangelicals developed a parallel universe with all of its insularities, myths, and propaganda, leaving them bystanders to the arguments and institutions of modern conservatism. Traditionalists, anti-communists, and libertarians shaped the conservative outlook between 1950 to 1965 as they debated the future of the American republic.

Bringing "a Sunday school mindset to the public square," evangelicals arrived at the eleventh hour. "Despite supplying voters for conservative politicians," Hart boldly says, "the born-again faith added nothing to the conservative mind." Why? Evangelicals tend to believe that a political philosophy resting on anything other than special revelation denies "the priority of faith to all aspects of human existence; it is to suggest that Christ or the prophet Amos need to takes notes from lectures by Aristotle, John Locke, or James Madison." Indeed, it is a bizarre notion that "a book written millennia ago is capable of addressing the specific challenges of modern statecraft," as if the mission of Jesus or Paul was to form "a more perfect Union." Even so, readers of this book would benefit from an excursus on the Bible's proper role in public policy, political reflection, and the professional lives of public servants. Hart leaves the impression that the alternative to "Bible-onlyism" is an evacuation of holy writ from the halls of power, which, if true, puts him in the company of John Rawls more than John Calvin.

On the occasion of our nation's bicentennial, Newsweek declared 1976 "The Year of the Evangelical" due largely to the outspokenness of presidential candidate Jimmy Carter. Jump forward nearly a decade and TIME magazine put Jerry Falwell on its cover in 1985. These journalistic signposts reveal how evangelicals morphed, in a very short time, from their affinity with the Left to the Right. Jimmy Carter, Mark Hatfield, and the "Chicago Declaration of Evangelical Social Concern" turned out to be a blip on the radar: the Reagan revolution coupled evangelicals and the GOP, as if these strange bedfellows embodied an eternal verity. For three decades it definitely seemed that way. With zeal veering on the eschatological, many evangelicals saw George W. Bush as one of their own. Disillusionment with a born-again president and culture war fatigue now characterize a growing number of evangelicals. Irony of ironies: the Religious Right has spawned the Religious Left. Today in many evangelical circles, especially anywhere in the vicinity of a university community, affiliation with conservatism is viewed like membership in a leper colony.

Hart's narrative of tension raises a question: Are evangelicals bona fide conservatives, as they claim to be, or faux conservatives? Of course this question assumes we have a handle on what it means to be conservative (and it brackets out evangelicals who never have thought of themselves in those terms). Definitions prove maddening because conservatives usually reject abstract philosophizing as the enterprise of liberals. Conservatism is an ideology against ideologies—an outlook marked by Kirk's principles of "custom, variety, prudence, imperfectability, community, and restraint of power." Here, I found Hart's book at once tantalizing and disappointing: tantalizing because he begins to limn the conservative mind, but disappointing because of his scant attention to the shapers of that mind.

Nevertheless, Hart awakens evangelicals to five factors that put them at odds with conservatism: (1) habitual appeal to the Bible as the prescriptive standard for national affairs, which abuses the Reformation principle of sola scriptura; (2) failure to differentiate the norms and tasks of the "little platoons" in society (e.g., family, work, church, neighborhood association, political party); (3) conflation of ultimate and proximate realities, thus neglecting "an older Augustinian view of the relationship between the City of God and the City of Man"; (4) naïveté about human depravity, beholden to a perfectionist model of sanctification; and (5) an anti-formalist attitude, which regards "the American political tradition's conventions of federalism, republicanism, and constitutionalism [as] merely formal arrangements that may be discarded if a better option surfaces." Bottom line:

… after thirty years of laboring with and supposedly listening to political conservatives, evangelicals have not expanded their intellectual repertoire significantly beyond the moral imperatives of the Bible. In fact, born-again Protestants show no more capacity to think conservatively than they did in the age of Billy Graham's greatest popularity. They do not know how to yell "stop" to the engines of modernity the way conservatives typically have. They have not learned to be wary of concentrations of power and wealth, frustrated with mass society and popular culture's distraction from "permanent things," or skeptical about any humanitarian plan to end human misery. Instead, evangelicals are more likely to support political plans to improve society, grow the economy, and expand the United States' global presence as long as doctors are not performing abortions and ministers are not presiding over the marriage of gay couples.

From Billy Graham to Sarah Palin belongs in conversation with To Change the World, the game-changer from sociologist James Davison Hunter. Both authors acknowledge the challenge of difference (or pluralism). They discredit evangelical schemes to redeem the culture as a "late-modern form of Constantinianism" (Hunter) and closely akin to "the Enlightenment project of social transformation" (Hart). They sharply criticize "what would Jesus do?" politics. And they strenuously exhort the church to decouple the public from the political, thereby restoring the importance of vocation. American Christians, they aver, are like the Israelite exiles in Babylon. Our call is not to turn Babylon into another Jerusalem but to seek its welfare through love and service, following the social—not political—power of Jesus. To Hunter's paradigm of "faithful presence"—enacting the shalom of God where we are situated—Hart adds traditional conservatism, which "seeks to preserve what is good in existing social arrangements because of an assumption that order is better than chaos, that change invariably produces instability, and that programs of perfection have been some of the most destructive in human history."

Together, faithful presence and traditional conservatism could rescue evangelicals from their addiction to changing the world—an addiction that ignores the Reformation doctrine of two kingdoms, as articulated by theologian David VanDrunen: "God rules the church (the spiritual kingdom) as redeemer in Jesus Christ and rules the state and all other social institutions (the civil kingdom) as creator and sustainer." In the former kingdom, God redeems a people for himself; in the latter, he preserves culture. Traditional conservatism is highly compatible with this doctrine because it chastens benevolent busybodies who try to immanetize the eschaton, as if sanctification rides on political engagement. A "painful transition" to classically conservative politics can happen, Hart says, if born-again Protestants reconsider the source of American greatness, which lies with its political order more than its religious identity, and reconsider the source of Christian greatness, which elevates the ministry of the church over swollen estimates of the family and state. With an Augustinian emphasis on the limits of politics, a Lutheran sensibility for the paradox of Christ and culture, and a Burkean wariness about revolutionary change, Hart's iconoclastic thesis arrives just in time as a presidential contest heats up, tempting many evangelicals with statist ambitions and utopian fantasies.

Christopher Benson is a writer in Denver. His work appears in Christianity Today and The Weekly Standard. He blogs at Bensonian.org.