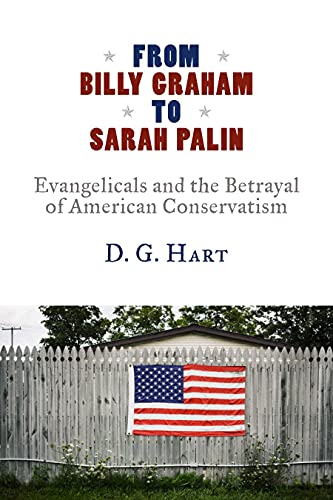 From Billy Graham to Sarah Palin

A timely corrective for evangelicals.

Everyone loves an iconoclastic thesis, the kind that elicits a flabbergasted response of "Oh, really?!" Three immediately come to mind: in an essay on military service, theological ethicist Stanley Hauerwas argues that gays (as a group) are morally superior to Christians (as a group); in God's Battalions, sociologist Rodney Stark argues that the Crusades were a justified war waged against Muslim terror and aggression; and in Defending Constantine, theologian Peter Leithart argues that the heresy of Constantinianism should not be named after the historical Constantine.

Add this eyebrow-raising thesis to the mix: in From Billy Graham to Sarah Palin: Evangelicals and the Betrayal of American Conservatism (a book whose title and subtitle should have been switched), historian Darryl Hart argues that "the evangelical temperament is inherently progressive." Despite being the largest single voting bloc in the Republic Party, evangelicals—owing to their religious and moral idealism—are no more fitted to traditional conservatism than an armadillo is suited to Antarctica. Currently a professor at Hillsdale College, the premier academic enclave for conservatives, and prolific author of such books as A Secular Faith: Why Christianity Favors the Separation of Church and State, Hart offers a historical account of evangelical political reflection since World War II.

Hart then turns to traditionalist conservatives (Russell Kirk, Roger Scruton, Michael Oakeshott, Mark Henrie, Patrick Deneen) for an alternative to the "redemptive utopianism" that prevails among evangelicals. In Hart's account, latter-day evangelicals, for all their internal differences, closely resemble their revivalist ancestors, stitching a patchwork quilt of American exceptionalism and providential benediction, patriotism and piety, evangelism and social action. "Deep within the soul" of members of the Religious Right, Hart observes, beats "the heart not of a Burkean conservative but of a Finneyite activist." If we follow the levels of reading in How to Read a Book, Hart has reached the highest level as a syntopical reader, placing multiple books in relation to one another and constructing a new and perceptive analysis on the subject. However, I do question how much can be extrapolated about the political ethos of evangelicalism—a remarkably pluriform movement—from literary evidence alone.

According to Hart, evangelicals forged a third way between the accommodationist posture of mainline Protestants and the separationist posture of fundamentalists. They found their political calling in the postwar years when the character of the United States was tested in the crucible of secularity. Animated by a transformationalist vision to reclaim America as the new Israel or redeemer nation, evangelicals developed a parallel universe with all of its insularities, myths, and propaganda, leaving them bystanders to the arguments and institutions of modern conservatism. Traditionalists, anti-communists, and libertarians shaped the conservative outlook between 1950 to 1965 as they debated the future of the American republic.

Bringing "a Sunday school mindset to the public square," evangelicals arrived at the eleventh hour. "Despite supplying voters for conservative politicians," Hart boldly says, "the born-again faith added nothing to the conservative mind." Why? Evangelicals tend to believe that a political philosophy resting on anything other than special revelation denies "the priority of faith to all aspects of human existence; it is to suggest that Christ or the prophet Amos need to takes notes from lectures by Aristotle, John Locke, or James Madison." Indeed, it is a bizarre notion that "a book written millennia ago is capable of addressing the specific challenges of modern statecraft," as if the mission of Jesus or Paul was to form "a more perfect Union." Even so, readers of this book would benefit from an excursus on the Bible's proper role in public policy, political reflection, and the professional lives of public servants. Hart leaves the impression that the alternative to "Bible-onlyism" is an evacuation of holy writ from the halls of power, which, if true, puts him in the company of John Rawls more than John Calvin.