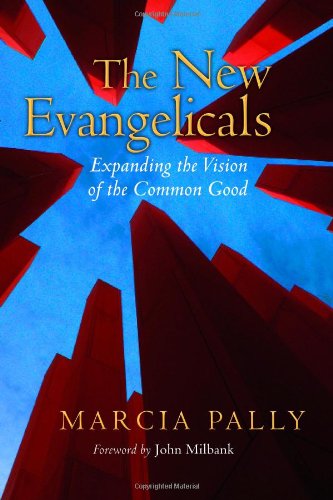 I received in the mail the other day an advance reading copy of a book that made my shoulders drop. I'll not mention the title, but its subtitle was something like "Finding God's Will for America." Don't get me wrong. I believe God has a plan for America, but the book seemed to indicate that God's plans centered on America. According to the publishers, the book offers a "distinctly evangelical" way of understanding history and God's vision of bringing in his kingdom.

It is books like these that make me sympathetic to the concerns of Marcia Pally's The New Evangelicals: Expanding the Vision of the Common Good. Pally, a professor of Multilingual Multicultural Studies at New York University, describes a group of evangelicals who are disillusioned with the Religious Right and whose priorities are "broadening toward an antimilitarist, anticonsumerist focus on poverty relief, immigration reform, and environmental protection."

Through investigative journalism and interviews, Pally gives us a taste of the ministry and efforts of household names on the evangelical left as well as ordinary church members and relief workers in various parts of the country. These people are tired of Pat Robertson politics and Jerry Falwell religion.

I know it may encumber some readers for the author to define terms, especially terms that we just assume to be obvious, but by the time I was done with The New Evangelicals, I was left wondering, "What do they mean by evangelical?" Pally defines evangelicalism as a movement of dissenting and "enthusiastic" Protestants emerging from the 18th century, focusing on a renewal of faith and a personal relationship with Jesus, individualistic Bible reading, and priesthood of all believers independent of ecclesiastical or state authorities (see pages 17-18). My hope is that the author is assuming more basic Christian doctrines, like the Trinity or the inspiration of Scripture, but nevertheless, she has in mind a very big tent when using the word "evangelical."

However, it seems the individuals Pally talked to may have a more a la carte approach to evangelicalism than anything else. For example, the consistent tone throughout the book is one of, I'm not the judge of whether Buddhist or Jewish people go to heaven or hell, all I know is that I'm supposed to love people. In fact, one of the very first people Pally interviews, Nan from Iowa, shows her cards on whether people who don't believe in Jesus Christ are "doomed to hell":

That cuts out an awful lot of people. Jewish people, Chinese people. But the God of love created us with minds, intelligence, and diversity—are we supposed to just cross out a whole chunk of the planet? I don't think so. If I were a missionary, sharing my faith would be through loving. If you get to know what makes me tick, my faith, and if you choose to join, that's fine. If you don't, I don't presume to judge.

Evangelicalism? Missions aimed at conversion? That's "pushy" Christianity, too Religious Rightish. But digging wells for fresh water, fighting AIDS, relieving hunger, lessening the disparity between the rich and poor, property distribution, environmental care, and ending human trafficking are all fundamental to the Christian mission. How these "new evangelicals" accomplish these tasks varies, from pushing legislature to quiet, anabaptist defiance.

Church history has never been in want of pendulum swings, and, according to historian David Bebbington, a defining mark of evangelicals is our activism. And we see this mark in the "new evangelicals." Their bios sound something like, "I grew up in a fundamentalist church that taught me to hate gays and lesbians and that being Republican was the only Christian choice." The "new evangelicals" have thrown out that bathwater, but I'm afraid I don't see much of the baby.

By comparison, emerging from the 1930s and '40s came another group, also called the "new evangelicals." They too were responding to previous errors—a generation of fundamentalism that made their identity in separatism, who guarded the truth but never advanced it. These new evangelicals—Carl Henry, Harold Lindsell, Harold Ockenga, and other kindred spirits—wanted a robust orthodoxy, but also the place back at the table that their fathers had lost. The personal lives of some showed the danger of making a place at the table too close to the center of their agendas (see George Marsden's Reforming Fundamentalism for the sad story of Harold Lindsell and John D'Elia's A Place at the Table on George Eldon Ladd's self-destruction). Nevertheless, their intentions were distinctly Christian, not wanting to reduce their evangelicalism so as to squeeze out the evangel.

I'm afraid Pally's evangelicals are similar in name only. Tim McFarlane, for example, hopes Buddhists and Hindus go to heaven when they die but takes comfort in not knowing. That way he can dig wells for clean water with them and, as he writes, "if God wants to use me to change their belief, that's fine. If not, then, heck, we dug a well."

I am concerned that Mr. Starke has chosen to focus his critique on the movement being chronicled by the book, rather than on the book. Given the entirely secular credentials of Ms. Pally (the book's author), it would not surprise me if she has (perhaps unconsciously) preferentially singled out members of this movement with views that Starke rightly calls heterodox but of which she would likely approve. Starke's conclusion broadly paints the "Religious Left" as heterodox and not truly evangelical, despite many examples that could be produced to the contrary. Instead, the critique should rather be focused on whether Pally, in giving this impression, has properly described the movement.

I agree that it seems odd for someone to claim to be an evangelical while not taking seriously the command to spread the Gospel. But more is required, as I read the reviewer: Claiming ignorance about God's plans and policies with respect to the adherents of non-Christian religions, by itself, calls into question a person's evangelicalism. Is certainty about the damnation of all non-Jewish adults who have not heard the name of Christ (including all sorts of problematic cases, such as the worshipers whose priest was Melchizedek — whoever exactly they were) to become a criterion for bearing the label "evangelical"? Or just certainty about present-day Hindus and Buddhists (to take the example from the article)? Those who dislike evangelicalism tend to portray evangelicals as overly confident in their judgments about God's will and policies (confident even where we disagree with one another!). Let's not build that into the definition of the term.