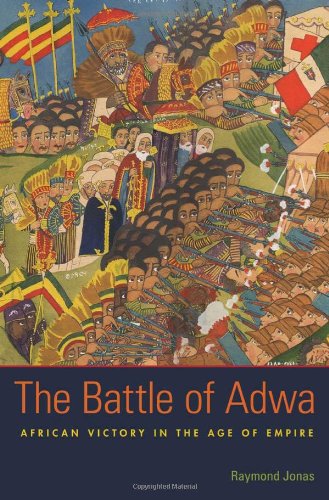 The Battle of Adwa

An African victory and its aftermath.

When I asked a colleague who teaches military history why more people don't know about the battle of Adwa, he replied somewhat glibly, "Because the Ethiopians defeated the modern Italians, not the Roman legions." Raymond Jonas, by contrast, is utterly serious about making the case that this 1896 battle was a "world historical event" that is part of our "global heritage." When describing Adwa, Jonas is a master storyteller, but when talking about its significance, he can sometimes sound like a press release written by a savvy marketer. According to Jonas, "Adwa opened a breach that would lead, in the aftermath of world war fifty years later, to the rollback of European rule in Africa. It was an event that determined the color of Africa." The truth of Adwa is somewhere between my colleague's droll jibe and Jonas' understandable exaggerations.

Adwa was a great battle—the Italian army was determined and well-armed while the mobilization of Ethiopia's feudal military was a monumental triumph—and everyone should know about it, which makes it all the more shameful that the Ethiopian victory did not have much lasting impact beyond the borders of Ethiopia and Italy. Jonas properly and expertly puts Adwa on the map of all-time great battles, but defending the claim that Adwa changed worldwide perceptions of Africa is a losing battle. Indeed, sensationalizing the significance of Adwa risks perpetuating the marginalization of Ethiopian history, since westerners have always treated Ethiopia as more of an idea than a reality. Ethiopian history is captivating, vital, and worthy of much more attention than it usually receives. Romanticizing it is the scholarly equivalent of foreign aid—well intended, but a mixed blessing. Ethiopia actually does benefit from international aid, but surely Ethiopian history can stand on its own without the messianic hype.

The first English book about Adwa, written by George Fitz-Hardinge Berkeley not long after the battle, set the rhetorical precedent that Jonas follows. In The Campaign of Adowa and the Rise of Menelik (Negro Universities Press, 1902), Berkeley called Adwa "the first revolt of the Dark Continent against domineering Europe," claimed "there is no parallel case in modern history," and predicted that it would "herald the rise of a new power in Africa." This theology of exceptionalism is integral to Ethiopian national identity, as demonstrated by the documentary by Haile Geirma, Adwa: An African Victory (1999). Geirma, however, is not content to show how Adwa united Ethiopia. He wants to promote the idea that Adwa united all of Africa (note the subtitle).

For a sobering alternative to this view, read Maimire Mennasemay's contribution to The Battle of Adwa: Reflections on Ethiopia's Historic Victory Against European Colonialism (Algora Publishing, 2005). Mennasemay points out that the Russian and Chinese revolutions, Gandhi's success in India, and old-fashioned nationalism had more impact on anti-colonialism in Africa than Adwa. Even more disconcertingly, he argues that Adwa's undeniable contribution to the building of the Ethiopian nation-state was not an unalloyed good. By uniting all of the important political factions, Adwa did create modern Ethiopia, but the military Adwa, he laments, was not accompanied by an Adwa of the mind. For Mennasemay, Adwa is an "unfinished internal battle" for the Ethiopian soul. Its "drum and trumpets" legacy is ambiguous because it created a "hegemonic narrative" of a "linear, monovocal and unitary national story" that highlights the need for resistance to external powers while downplaying or stifling "the possibilities of resistance to internal oppression." In other words, it legitimated Ethiopia's version of manifest destiny, and it did so by elevating Menelik from a provincial king to an absolute monarch who might have been the last ruler to believe in the divine right of kings.

Menelik is a larger-than-life figure who deservedly occupies the center of this narrative. Jonas notes that his smallpox-scarred face made him look harder than he was by masking his warmth and kindness. Still, he could be a ruthless schemer. Jonas even hints that he was not above committing treason (he allegedly colluded with the enemy against the previous emperor) as he plotted, fought, and outsmarted his way from a provincial kingship to become emperor. Justified by his claim to be a direct descendant of King Solomon and the Queen of Sheba, he set about uniting a very fragmented country. He also began expanding Ethiopia by waging a campaign (he called it a Crusade) against a neighboring Muslim kingdom.

Menelik alone deserves cinematic treatment but there are plenty of other colorful characters—so many that Jonas cannot help but depict them with bold narrative strokes. How could this battle not be made into a Hollywood blockbuster? There is Menelik's advisor, Swiss-born Alfred Ilg, an engineer and adventurer who served Menelik for life, eventually marrying an Ethiopian. Jonas calls their relationship "one of the great political partnerships of modern times." Then there is Empress Taytu, proud and shrewd, who extended Menelik's power base to the north; treated Addis Ababa, the new capital, as her personal property; and led an attack at Adwa. Unforgettable too is Makonnen, Menelik's de facto foreign minister and father of Tafari Makonnen, the future Ras Tafari (and subject of the Rastafarian cult) and later still emperor under his throne name, Haile Selassie (which means power of the Trinity). In his many travels in Europe, Makkonen gained fame as "a perfect gentleman" and "the most intelligent man in Ethiopia." The French poet Arthur Rimbaud even makes a cameo appearance, since he fled his youthful decadence for business opportunities in Africa, where he tried to make a killing selling armaments to Menelik. Menelik, by the way, got the better of him in the exchange.