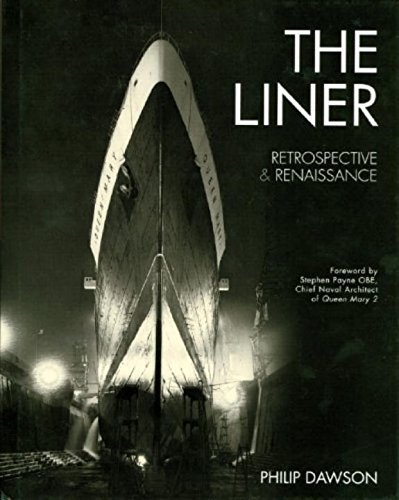 The elusive romance of another time.

A liner is an ocean-going ferry. Its purpose is to transport people from one place to another. Thus, despite the "renaissance" in the subtitle of Philip Dawson's delightful study, The Liner: Retrospective and Renaissance, they don't really exist anymore. The industry, however, has survived by reinvesting meaning, in a pop psychology sort of way, as being about the journey rather the destination. The liner is dead; long live the cruise ship!

Undoubtedly most young people today could only name one true liner, the Titanic. Dawson faithfully discusses this memorable vessel where appropriate, but it is no obsession of his. The Queen Mary 2, launched in 2004, is his great passion. Indeed, the only times when the spell of this charming book wavered were when the thought occasionally nudged into my mind that perhaps I was actually reading an elegant advertisement for its company, Cunard.

Still, precisely because the Titanic is only allowed to be an ensemble player, we are incidentally able to discover how some of our perceptions about her are distorted. She was not some sui generis wonder, but rather just the fraternal twin of her sister ship, Olympia. Nor was her sinking uniquely tragic; a comparable loss of life came just three years later when the Lusitania was torpedoed by a German submarine while she was carrying civilians on a commercial passage.

If the great lesson of the Titanic was that human hubris invites divine judgment, no one learned it. Ships have continued to receive self-aggrandizing names. If Titanic was an indiscreet title for the handiwork of mere mortals to appropriate, what is one to make of more recent appellations such as Sovereign of the Seas? Moreover, throughout the middle decades of the 20th century, liners still attempted to set speed records—a game that was formally recognized by the awarding of an official Blue Riband. America's "ship of state," the United States, claimed this prize for her maiden voyage in 1952. It would seem that the only lessons truly imbibed from the deadly sinking in April 1912 were along the lines of "have enough life boats."

In the popular imagination, when it comes to liner travel we think of the golden age, and we think of first class. Dawson's generously illustrated book provides an array of photographs of alluring interiors, as well as prose that catalogues the finishing touches from mahogany to marble. A whole chapter is given over to "The Splendors of La Belle Époque." (Dawson, a resident of Toronto, tends to lapse into French when he wants to make something sound attractive. I'm not sure whether this is a Canadian tic or a confidence trick he has picked up from studying the hospitality industry.)

Our imaginations, no doubt, are even better than the real thing. Dawson enthuses about the "glory days," but the details are not always all that inviting: "The first entertainment feature of the day would be a performance of classical music played on the organ in the main lounge at 10:45 AM, while hot bouillon would be served on deck at 11:00 AM." I think I'll sleep in.

We seem to be always working to destroy what we claim to love. The magic of a transatlantic crossing was supposed to be that it was a little escape, a built-in holiday. One was cut off from duties and released to enjoy leisure, dining, good company, reading, and the art of conversation. As soon as it was technologically possible, however, radio messages were being used to conduct business while aboard. Today's ships provide business centers and in-suite internet access, and no doubt are awash with cell phones. One senses a hint of disapproval when Dawson observes how life on cruise ships is now dominated by a relentless succession of round-the-clock organized activities.

The grand-hotel luxury of the great liners was never for all passengers. The steerage class was filled with humble emigrants simply trying to get across an ocean as cheaply as possible. Moreover, refinements were slow in coming for any travelers. A passage on a Victorian liner was to be endured rather than enjoyed. To take an extreme example, still at the mercy of the wind, a trip from Liverpool to New York in 1837 lasted 100 days and resulted in 17 people starving to death.

There was no first-class pampering back then. As modest a request as table napkins met with resolute, official defiance: "Going to sea is a hardship. The Cunard Company does not undertake to make anything less out of it … if people want to wipe their mouths at a ship's table, they could use their pocket handkerchiefs." As there was no refrigeration, liners carried livestock which was slaughtered for food as needed. Routes other than the transatlantic one grew up through the interest of Western governments in efficient postal delivery. The P & O Eastern lines, with entrepreneurial diversification, systematically transported opium as well as passengers and post.