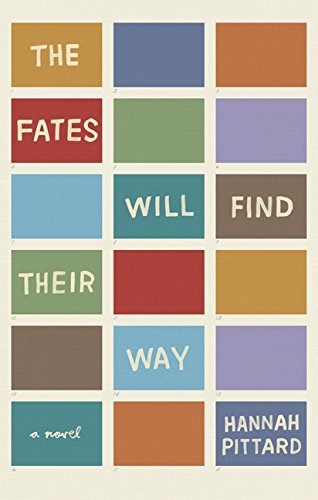 The Fates Will Find Their Way

I recently asked my class why so many authors return to adolescence, to teenage years, to tell coming-of-age stories. A girl with an infectious smile punctuated by two lip rings raised her hand and said, "Because high school is when you realize you have to figure life out."

Hannah Pittard's debut novel, The Fates Will Find Their Way, is ostensibly about a search for a missing girl. The plot runs simply and straightforwardly, and you could tell it all over half a cup of coffee. Nora Lindell goes missing on Halloween. The next evening, a group of boys gather together in a friend's basement to discuss what might have happened. Two claim they saw Nora climbing in a Catalina; later another claims to have seen her at the airport. This incident propels the book forward, as the boys wonder about Nora, and as we follow the boys. We watch them become men, we watch them succeed and stumble, hurt and hope. And in the process, Pittard's novel reaches beyond the sum of its parts. It becomes more than a search for a missing girl, more than a few boys trying to figure life out: its whole becomes an aching and effervescent reminder of what we must accept, and of why we even tell stories.

Pittard tells the story in the collective first person-we-as the boys together remember stories and later tuck in daughters and kiss wives goodnight. She manages to capture intense emotion even with this plurality of realities, as the boys struggle together in their obsession over Nora, wondering about her hopes and fears, about what happened to this girl they all knew as 16-year olds. In this collective voice, Pittard reminds us of the intensity of friendship in high school: friends rise and fall together, experience together, grow together. The boys all go to the same house together after school, the same pool parties, and later, after heading to college, they come back to town together, ready to begin their practices and businesses and have children of their own. This collective voice conveys the distinctive intimacy of old friends, yet it also reminds us of the way in which we perceive our shared reality from different angles.

Along the way, the story becomes more about the boys than it does about Nora. As they wrestle to figure life out, they sometimes exert control over their circumstances and sometimes fall prey to fate. Or both. Each boy has one foot in the world of childhood (they all run to their mothers) and one in the world of adulthood. After a particularly lewd scene (the book is told, remember, from the eyes of teenage boys), in which the entire senior and junior classes watch the erotic 9 ½ Weeks, the boys gather together at the river to smoke joints and realize, "you could practically feel the adult pushing out, pushing forward into the world …. This was just the beginning of our lives-our lives, things that we were responsible for, things that we could control."

Still, the boys remember Nora. They imagine what life might be like for her. Someone claimed that she moved west, so the boys imagine her out west, struggling to find herself. Always, Nora remains a child in their minds. As such, she embodies possibility:

Her fate has not been spoken, as the boys' has. As the boys become men and their responsibility for others bars certain options, they think of Nora while in bed at night. Maybe she escaped her fate. Maybe she moved out west, or to the other side of the world. Maybe. The maybe-this is what Nora stands for. She embodies innocence, hope, youth: possibility.

Pittard lingers perhaps a moment too long in the shared memories, reveries, and daydreams of the boys. But, just at the moment when the story begins to wander, when the stories the boys tell each other about what Nora's life might be begin to lose momentum, the plot returns. The boys, most of them parents now, hear of where or what Nora might be, in a more concrete sense than before.

In the end, the story is impossibly sad. Not because of what does or does not happen to Nora, but because of what happens to the boys. People die, marriages break. Yet the story does not dissolve into melancholy or melodrama, but remains wistful and poignant. Pittard's prose goes a long way: it is polished and clean, and she channels the voice of the boys. And despite the sadness, there's an exuberance to this novel as well: there are moments, between remembrances and responsibilities and longings, when the boys feel ridiculously happy and satisfied with their lives. Pittard writes with a sympathetic gaze-the gaze of an old, old friend who knows your mother and father and talked with you about your first kiss and cannot help but offer sympathy.

We watch the boys because they are like us: they struggle with hope and passion against reality and age; they struggle with fate and control. Mostly, they struggle to accept their lives. As they hold onto the maybe that Nora offers, we see that the real discovery the book leads us to is quite different from what we imagined while setting out. Hannah Pittard has created a story filled with such absurdity and tragedy that we're compelled to believe it, and she tells it in such lovely prose that we can't help being moved by it. We see that we must also accept the overflowing cup of life, with all of its imperfections.

Gabriel Knipp teaches English at a high school in Denver. He blogs here.