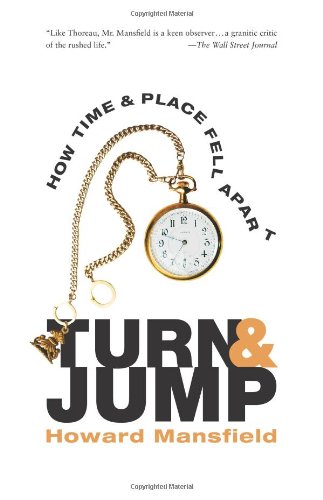 For Mansfield, it's not surprising that the town of "Turners Falls has high rates of poverty, suicide, and spousal abuse." Nor is it particularly unexpected that its high school's teams are called the "Indians," though its students learn little Indian history. Turners Falls, he writes,

is divorced from deep time, from the true history of the land. For thousands of years this place kept time by the salmon leaping the falls and the Indians gathering to fish. In an instant on one spring morning in 1676, that ended. In another instant, the falls were dammed; the salmon were gone. The river's run has changed; time has changed.

Although people may forget, the land does not. Seen from such vantages, "The distinctions we make between years and decades and centuries fall away."

Mansfield's metaphysical hunches take him in the direction of the East, which may trouble Christians. But the weight and meaning he ascribes to time shouldn't. Rather, it should provoke. At it turns out, I read much of this book on a twilight flight from Chicago to Portland, jet racing to catch the sun, a missile willed into the air by this mysterious, determined drive to conquer space, to capture time. It's all very heady and exhilarating, our way of life. But everyone knows living begins when you slow down, get off the plane, and look time and place in the eye. What God has brought together, let no man separate.

Eric Miller is associate professor of history at Geneva College in Beaver Falls, Pennsylvania. He is the author of Hope in a Scattering Time: A Life of Christopher Lasch (Eerdmans).