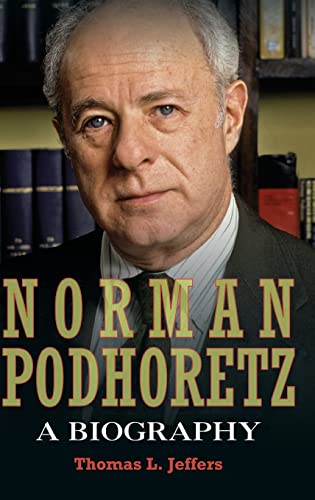 The necessity of making and keeping enemies.
March 2011

Conventional wisdom has it that the story of longtime Commentary editor Norman Podhoretz is the story of a political journey from left to right. Podhoretz biographer Thomas Jeffers suggests that the conventional wisdom on the Podhoretz odyssey is not entirely on the mark. To be sure, Podhoretz's "ex-friends" from the percolating Fifties and tumultuous Sixties will likely disagree. After all, they have been testifying to his apostasy ever since. Or should that be heresy, at least in the secular sense of that now nearly extinct term?

Apostate or heretic? It does make a difference. No doubt any number of one-time Podhoretz associates do regard him as an apostate. By their reckoning, their former comrade long ago went from their side to the dark side. But did he? Or did they move further left as he began to edge—and then thunder—his way to the right?

Actually, Jeffers doesn't so much attempt to categorize Podhoretz as take him at his word. And the word is "liberal." The postwar coming-of-age Podhoretz was pretty much a conventional Cold War liberal. The young Commentary editor of the 1960s was, by his own definition, a "left-liberal." And the post-Sixties maker of "ex-friends" has been, by his wife Midge Decter's puckish (but not inaccurate) definition, a "paleoliberal."

Of course, "neoconservative" is the label most commonly attached to Norman Podhoretz. And it, too, is a not inaccurate term. Podhoretz certainly fits Nathan Glazer's definition of a neoconservative as "someone who [in the old days] wasn't a conservative." He is also, to borrow from fellow neocon Irving Kristol, a "liberal who's been mugged by reality." Today, and for a long time, Norman Podhoretz has not been hesitant or ashamed to simply call himself a conservative. Still, there has long been a consistent core to his thinking on both foreign and domestic policies.

Before further exploring his journey, such as it has or has not been, we should note that Professor Jeffers (of Marquette University) had the full cooperation of Podhoretz, his family, and his current friends in undertaking and completing this project. The result is neither an authorized nor a sanitized biography. But it is a friendly biography. It is also a compelling biography and a very good read.

Credit for its compellingness (if there can be such a word) must go to Podhoretz himself (with more than a little help from Thomas Jeffers). Credit for its general readability should go to the professor (of literature)—with more than a minor nod in the direction of this compelling maker of friends and ex-friends, not to mention out-and-out and ongoing enemies.

When it comes to those enemies, Podhoretz (who began his writing life as a literary critic) may well have taken a lesson from novelist William Dean Howells. In Howells' estimate, making enemies was the easy part; keeping them was difficult. Let it be stipulated that Norman Podhoretz has succeeded admirably on both counts. In doing so, he has his own take on what constitutes an enemies list: "It's important to have enemies, because everything depends on the kind of enemies you have." What must also be stipulated is that Podhoretz's success in this dual business of enemy-making and enemy-keeping has not come without its costs, including considerable personal costs.

Surprisingly, or maybe not so surprisingly, Norman Podhoretz, like most of the rest of us, likes to be liked. Which makes his making of enemies all the more compelling—and all the more important. Former Nixon aide and ongoing Podhoretz friend Leonard Garment once asked his friend if he had any regrets about his life. Podhoretz's response is at once revealing and poignant: "I regret the price I've had to pay to do the things I felt I had to do." The heart of this biography details those "things," while occasionally hinting at the price that has been paid. As such, it stands as a brief for Podhoretz, not only because Jeffers seems to be in essential agreement with his subject, but also because he's both aware that a price has been paid and convinced that Podhoretz would have been willing to pay an even higher one to defend the positions he holds so dear.

Fortunately, Podhoretz has not had to break with any member of his family. His wife and he are a formidable team, and his children and in-laws are all on that same team. An author of power and clarity in her own right, Midge Decter is too self-deprecating by half in characterizing their relationship this way: "I bring him coffee and he gives me courage."

No doubt that courage is rooted in his Brooklyn upbringing, where he learned that it was permissible to be beaten up as long as you didn't run away. But it is also linked to his determination to be a "truth-teller," as in the truth "as I see it." The italics are Podhoretz's, who adds that the qualifying phrase is "not exactly relativistic, but it's not exactly absolutistic either." Spoken like the old liberal that he still is.

In sum, Podhoretz is both an unabashed American patriot and a firm supporter of Israel—and one who sees no contradiction between the two. He was an opponent of legal segregation and a critic of affirmative action and sees no contradiction there as well. He is also an unflinching moralist, who sees no contradiction between asserting his moral truths and questioning whether overturning Roe v Wade would necessarily be a good idea. Finally, he is willing to concede that homosexuality may well be genetic, even as he asserts that there is such a thing as free will and worries that enacting the gay agenda will encourage "waverers" in the wrong direction. And, yes, on the Podhoretz map of life there are a number of decidedly wrong directions.

Once upon a time, all of the above would have marked Norman Podhoretz as a liberal in good standing. Today he is a thoroughgoing apostate in the eyes of his "ex-friends" on the left, as well as a bit of heretic to his new friends on the right. No matter. Podhoretz has always called them as he sees them. And Thomas Jeffers? He has been discerning enough to detail and explain the Podhoretzian consistencies, as well as their twists and turns, and all without a hint of cheerleading or a note of smug condemnation. And, oh yes, Jeffers has also been wise enough to stand back and stay out of Mr. Podhoretz's well-informed and carefully crafted way.