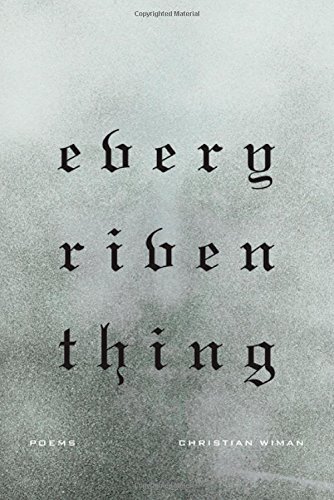 "Riven," the gothic-sounding adjective in the title poem of Christian Wiman's new book, means "split, cloven, rent, torn asunder," hinting also at a "broken or distressed" spirit. Given that Wiman was diagnosed with a rare blood disease several years ago, and spiritual themes are pervasive, one might expect the poems either to embrace or to shake their fist at God. But they somehow manage not to do either—not really.

Many of the poems in this devastatingly beautiful book might be described as stricken lyrics. In the traditional lyric poem, the poet explores both a literal and a symbolic or metaphysical theme at the same time. Lines that on one level describe a flower—Wordsworth's daffodils, for instance—might also speak to a spiritual reality. Wiman's lyrics hint at these double meanings, but the "literal" is so finely described that the poems rarely simply take flight.

The second poem, "After the Diagnosis," introduces the theme of the speaker's potentially terminal disease. Although the disease is nowhere mentioned in this poem (it is an explicit presence in only a handful of the poems, nearly all in the first of the book's three parts), the title and the poem's subject—the speaker's memory of an apple sapling that was struck by "one random blow from above"—appear to set up the most conventional of lyrics. But the poem eases into a meditation on the shifting perceptions of change at different points in one's life before concluding with a description of the tree (rescued from sentiment by the intriguingly ambiguous penultimate line), which

The poem that follows, "Five Houses Down," about an eccentric, junk-collecting man who lived in the speaker's neighborhood, created a flutter when it first appeared in The New Yorker. "I loved the eyesore opulence / of his five partial cars," the speaker says:

As in these lines, the poem's precise description is laced with an almost punch-drunk reveling in the sheer music of jostling, echoing words. "Slipknot, whatknot, / knot from which no man escapes," the speaker muses later in the poem, undoing and reassembling the words, before he, like the quirky neighbor, "prestoe[s] them back to plain old rope."

Wiman has always been adept in formal and semi-formal forms, and the same fluency recurs in Every Riven Thing, but the poems are more playful and offbeat, while at the same time deadly serious. The title poem is like a homemade villanelle. "God goes, belonging to every riven thing he's made" recurs as the opening line of each stanza, but with varying punctuation serving as a springboard to shifting meanings and emphases. "Given a God More Playful," is a grave, joking, sing-song indictment of a god who decided to "make, and proliferate [time] / and vanish / [when he was] through with it."

"The best thing about Christian Wiman," the critic Clive James shrewdly notes in a recent review, "is not that he reminds you of previous poets: it's that he makes you forget them." James exaggerates a little. "So Much a Poet He Despises Poetry" doesn't quite eclipse the early 20th century poet Marianne Moore's "Poetry," with its deadpan opening line: "I, too, dislike it." "This Mind of Dying" will send some readers (and a good thing, too) back to John Berryman's "Eleven Addresses to the Lord." But the poems are never "just like" Moore or Berryman or Gerard Manley Hopkins (each riven thing "sing[s] his being / simply by being / the thing it is") or John Donne ("shatter me God") or Wallace Stevens ("the ground /grew fluent as he moved, a slow undulance") or any of the other visitors to the poems. Wiman mines the tradition, but he forges something strange and new.

God is often most palpably present in his absence, in the things he has made or left behind. Nor is this odd inversion of negative and positive space limited to God. "Gone for the day," Wiman writes in the love poem for his wife that concludes the book, "she is the day / opening in and around me.

"Every Riven Thing" is full of contradictions—the mixture of controlled and rambunctious language, the presence and absence of God, the strong undercurrent of grief in a love song to the world. And it is full of risks—hopped-up language (as in the "pain scalding us to each other" or "my pretties cantankered into twisty things") that could fall flat but rarely does. The poems are not easy to describe, and they are even harder to forget.

David Skeel, a law professor at the University of Pennsylvania, blogs about Christianity, law, literature, and other topics at lessleast.com.