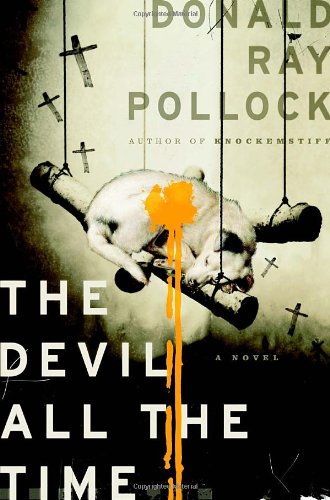 The Devil All the Time

Donald Ray Pollock's personal story is in some ways almost as surprising and fascinating as the deeply moving and sometimes outrageous tales he spins. Pollock was raised in Knockemstiff, a rough little hamlet in southern Ohio. According to legend, the town was named after a fistfight. As one version of the story goes, two women were fighting over a man in front of a church, one the wife and the other a girlfriend. The preacher said he heard one of them swear she was going to knock the other one stiff.

I also grew up in Knockemstiff, about a mile down the road from Pollock, and often rode my bike to the little cinderblock store his parents owned, to trade pop bottles for candy bars and RC cola. We were classmates in school, though he dropped out before graduating, working first in a slaughterhouse, then in a paper mill, where he remained for 32 years, mostly as a truck driver. Along the way, amid bouts with alcoholism and failed marriages, he started taking night classes and earned his college degree. Then, around the age of 45, he came to the unlikely realization that he wanted to be a writer. Initially, he worked to hone his skills by typing out, word for word, the stories of writers he admired, much like a garage band plays cover songs in order to get a feel for how to write their own music. He told me over lunch one day that his rather modest goal, at that point, had been to publish just one good short story. As he pursued this goal, a couple of his stories caught the attention of a professor at Ohio State, who was so struck by them that she persuaded him, against his own wishes and better judgment, to quit his job and study creative writing. While working on his MFA there, he published Knockemstiff, a jarring collection of short stories that garnered considerable critical acclaim and won the PEN/Robert Bingham Fellowship for Writers.

One of the more memorable characterizations of Pollock's debut book was given by the novelist Katherine Dunn, who described him as a "godless Flannery O'Connor." And indeed, Pollock's bizarre characters are dirty, depraved, and desperate losers who often dream of a better life, fantasize about it, and sometimes hatch ill-conceived schemes to get out of Knockemstiff and seek the big time. Yet, sadly, their deeply rooted vices and ignorance invariably keep them there. Knockemstiff, it seems, is almost an image of the human condition.

A common theme running through most reviews of Pollock's first book was the absence of redemption in his stories and the sense of utter hopelessness they display. There is, to be sure, an occasional glimmer of light. In "Lard," for example, one of the characters, ashamed by the way he talked about his imaginary girlfriend to impress his vulgar friends, is moved to show kindness to a real person badly in need of some humane treatment. In "Giganthomachy," two young boys are wiping out a huge ant hill, pretending the ants are a horde of giants. As they discuss what roles they want to play in their make-believe world, one of them finally says: "We're gods. Only a god can stop something this big." Their play is interrupted by a scream from the house of the boy who had been speaking. He realizes that his abusive father is yet again beating his mother, and he better go help. Reminding himself that he is a god, and that gods can do anything, he bravely charges toward the house to try to intervene.

That is about as real as the gods ever seem to be in Knockemstiff. As much as we may need them to help us deal with the gigantic problems we face, the gods figure here, if at all, as the stuff of boys' fantasies, conjured up to help them cope with a brutal and chaotic world. A passage from "Fish Sticks" expresses the same sentiment with specific reference to Christianity, in a description of a Laundromat bulletin board.

There was a notice for a big tent revival over on the hopeless side of town, a crudely written flyer promising a better life, something that Del had craved for a long time …. [M]ore than anything, the poster dredged up memories for Del, reminded him of the time he and Randy wasted an entire year attending the Shady Glen Church of Christ in Christian Union just to win a prize, a little red Bible that fell apart the first hot day. They were eight years old.

Perhaps even more telling is a passage in "Holler" about a pitiful, paralyzed old man who is haunted by memories of the Korean War. He makes it through his miserable days by getting drunk every morning and staying that way: "Except for a constant tremor in his left hand, he was as dead as Jesus from the chest down."

Although references to religion are relatively sparse in Knockemstiff, the picture that emerges is that Jesus is dead and Christianity's promise of a better life is a fantasy for hopeless people, a delusion that can't stand the heat and is bound to crumble in the crucible of real life. Religion is a phantom hope certain to be crushed by elemental realities—violence, bad luck, treachery, lust—leaving ever deeper disillusionment in their wake.