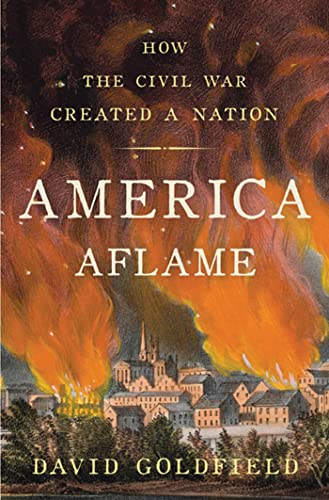 Foolish, self-righteous northerners—that is to say, evangelicals—led America into a needless civil war and destroyed the credibility of their faith in the process. So argues historian David Goldfield in his new book, America Aflame: How the Civil War Created a Nation . Goldfield, the Robert Lee Bailey professor of history at the University of North Carolina, Charlotte, adds to an already towering mountain of material published about the Civil War on the 150th anniversary of its start. But his extensive work stands out for a provocative, disturbing thesis supported sporadically over more than 600 pages that recount the war's causes, progress, and aftermath.

From the first page we can see exactly where Goldfield is headed. Calling the war "America's greatest failure," he faults northern evangelicals for injecting their dangerous moral certitude into the debate over slavery, overheating a political process that could have resolved the conflict peaceably. Infiltrating the Republican Party, northern evangelicals—blinded by self-righteousness, lacking humility, and condemning opponents as mortal sinners—elevated "political issues into moral causes" and "poisoned the democratic process," Goldfield writes. Abolition, while a worthy goal, did not require war, he argues.

"Evangelical religion had not prevented America from going to war; to the contrary, it fueled the passions for a dramatic solution to the transcendent moral questions," Goldfield contends. "Evangelical religion did not prepare either side for the carnage, and its explanations seemed less relevant as the war continued. The Civil War destroyed the Old South civilization resting on slavery; it also discredited evangelical Protestantism as the ultimate arbiter of public policy."

Goldfield's claims might understandably disturb many evangelical readers accustomed to honoring abolitionists as heroes. But he raises important questions for all Americans who recall the death of more than 600,000 countrymen with romantic delusions of glory. Why did America go to war—and such a brutally modern one at that—when every other nation ridded itself of slavery peacefully? And for evangelicals in particular, why did Christianity in the northern United States thrive in the century leading up to the war but shrink in the face of encroaching skepticism for much of the century afterward? Such eminent historians as Mark Noll ( The Civil War as a Theological Crisis ) and Harry Stout ( Upon the Altar of the Nation ) have recently addressed these troubling questions and many others in two essential books on religion in the 19th century and the war that defined it.

Unfortunately, Goldfield apparently did not consult these indispensable contributions even while covering the same academic terrain. They might have saved Goldfield from treating his evangelical subjects with a hostility that lacks nuance and even consistency.

Goldfield tells a story of heroes and villains. Daniel Webster appears as the consummate statesman who might have been able to pull the nation back from the brink of war. Walt Whitman's poetry seasons the narrative with a sweet patriotic flair at the war's outbreak but sours over the years when the stench of gangrene from military hospitals fills his nostrils. We hear from many colorful, familiar diarists who also graced Ken Burns's Civil War documentary, including George Templeton Strong, Mary Chestnut, and poor Sullivan Ballou.

The Beecher clan and their "apocalyptic" rhetoric don't fare so well in Goldfield's telling. Harriet Beecher Stowe, spurred to action by the Fugitive Slave Law, stirred up trouble with her book Uncle Tom's Cabin, which gave credibility and momentum to the abolitionist cause. Her "disingenuous" father, outspoken pastor Lyman Beecher, stoked nativist fears with his "violent" sermons motivated by fear of the growing Roman Catholic masses.

Even Dwight L. Moody, whose fame did not peak until after the war ended, suffers in this account. Goldfield implicates Moody for not doing more to protest against whites who massacred thousands of blacks in the South during Reconstruction. But such scolding makes little sense for Goldfield, who faults evangelicals for injecting their moralizing religion into politics. In fact, Southern "redemption," when whites reclaimed their positions of political authority in Reconstruction, seems to be just the sort of amoral, politically savvy compromise between northern Republicans and southern Democrats that Goldfield advocates as a solution to avoiding civil war in the first place.

Other contradictions undermine Goldfield's argument that northern evangelicals should be faulted for the war. He observes that the national revival of 1857-58 invested all events with a heightened sense of dramatic meaning. He notes that the prayer meetings in New York City, much like similar gatherings around the country, strictly prohibited anyone from speaking about politics and other contentious topics. For this reason some scholars have faulted Main Street evangelicals for ignoring the great moral issue of the day, slavery. It's not apparent how northern evangelicals could both seek to elevate supposedly personal, spiritual issues over the suffering of Southern slaves while at the same time manipulate the political process to launch a needless war for their liberation.

Perhaps no one, however, endures so much hostility in Goldfield's narrative as the "ranting" military chaplains. It's enough for him to quote a couple wounded soldiers who loathed their presence to draw sweeping theological conclusions.

"If they survived the operating table, recuperating soldiers contended with the groans and screams of comrades, the indifference of hospital personnel, and incessant visits from ministers trying to save their souls," Goldfield writes. "When the young men wrote home about such visits, they typically expressed exasperation. They had seen war and its consequences. If God was omnipotent, why would he allow such carnage and the accompanying misery for families across the land? Most solders retained their religious beliefs, but the war shook their faith. A wounded Ohio soldier recalled ministers 'who would come into my ward and preach and pray and sing to us, while we were swearing to ourselves all the time and wishing the blamed old fools would go away.' One of the many reasons why Whitman's soldiers welcomed his presence was that, as one wounded private noted, he 'didn't bring any tracts or Bibles; he didn't ask if you loved the Lord, and didn't seem to care whether you did or not.' "

Elsewhere Goldfield concludes that no theology could sufficiently explain what soldiers witnessed on the battlefield. Maybe the soldiers continued to display some measures of piety, he grudgingly concedes, acknowledging that large number of revivals that spread among them in both Union and especially Confederate camps. Nevertheless, he maintains, their faith in God's sovereign purposes could never recover: "Any soldier who participated in battle and looked out over the field afterward found it difficult to fathom what God had in mind." (How does Goldfield know this?)

It's only fitting that, having dragged the nation into war, northern evangelicals would have to watch helplessly as the war destroyed their faith. Goldfield concludes: "The war had thrashed the certitude of evangelical Protestantism, its belief that mankind could perfect itself, its confidence in the approaching millennium and America's special role in that event, and its hubristic affirmation that it was possible to know God and his intentions."

It's unfortunate that such strange comments about evangelical belief—elsewhere Goldfield attributes the tenet of "man's transcendence" to evangelicals—detract from the necessary process of pondering the deleterious effects of the war on Christianity in America. Whatever the war, you will often find American evangelicals leading the charge. Why? The Civil War is a cautionary tale. As if the carnage itself weren't distressing enough, we can see how the war separates a period of American history where churches wielded great public influence from a period of long-term decline. Noll's aforementioned book shows how the debates over slavery, with both sides citing the Bible as their source, contributed to growing skepticism over scriptural authority. Stout's work explains how the unprecedented death and destruction overwhelmed pastors who could not give an adequate theological response. Has anything changed since then? Are we more cautious today to endorse the evil of war with the hope that greater good might result? Having encouraged the call to arms can we then comfort the widows and counsel the traumatized who return?

For all its head-scratching claims, Goldfield's book excels with helping readers understand the subjects he knows best, especially Southern memory of the war. But even here, there are troubling inconsistencies. "While the rest of the nation hurtled toward the future," he writes, "southerners created a past." But why did evangelicalism flourish in the post-war South? Goldfield's answer sits uneasily with his account of the war's irresistibly corrosive impact on faith. Post-war Southerners, he explains, embraced this conservative expression of Christianity "so fiercely that it became a folk religion indistinguishable from southern culture." The North just wanted to move on and make money, Goldfield argues, with examples drawn from preachers promoting the prosperity gospel and oligarchs accumulating unprecedented fortunes. But the relative poverty of the South reinforced longing for an earlier era with superior values.

So, then, as the North rushed to shed its piety, the South clutched it more tightly than ever. Proud, insular Southern culture would shield evangelical faith from many threats throughout the years. But this folk religion was also complicit in the subsequent evils of Jim Crow that preserved a measure of the antebellum status quo in race relations. Indeed, you can no more separate the good from evil inside every human heart than you can recall historical events that unfolded just the way everyone expected. The Lord works in mysterious ways—far more mysteriously than anyone imagined when a South Carolina battery fired on Fort Sumter 150 years ago.

Collin Hansen serves as editorial director for The Gospel Coalition. He is the co-author of A God-Sized Vision: Revival Stories That Stretch and Stir. You can follow him on Twitter.