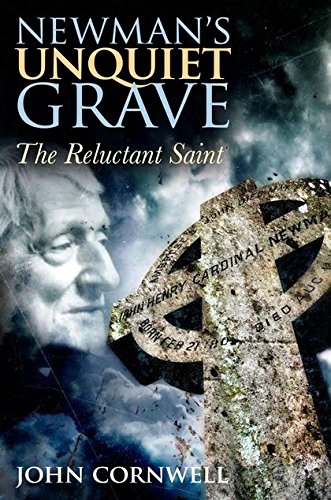 James Joyce thought he was England's greatest prose writer. In A Portrait of the Artist as a Young Man, Stephen Dedalus described his prose as "cloistral silverveined." His spiritual autobiography is widely considered the best in the genre since Augustine's Confessions, and George Eliot wrote that it "breathed much life into me." The Victorian critic Richard Holt Hutton called him "not only one of the greatest English writers, but perhaps the very greatest master … of sarcasm in the English Language." W. H. Auden marked the beginning of the modern age with his conversion to Catholicism. He wrote the treatise in support of liberal education. He is arguably the most important thinker of the last two hundred and fifty years in both the Anglican and Catholic churches. One would think that John Henry Newman's reputation as a man of letters would be more than well-established.

But perhaps because of Newman's particular blend of the literary and the theological, he may also be England's greatest unread prose writer, at least among current undergraduates and students of literature. This was not always the case. Fifty years ago, Martin Svaglic remarked in his introduction to The Idea of a University, "There must be few American collegians, surely, who do not, thanks to their freshman readers or their literature survey books," recognize some of Newman's ideas, however "hazily." Yet when I asked my peers in my graduate program in literature and cultural studies how many of them had read Newman, none of them answered in the affirmative. In fact, none of them had even heard of him.

It is Newman's reputation as a man of letters that John Cornwell seeks to cement in Newman's Unquiet Grave. Though Newman's beatification in September by Benedict XVI has spawned a small industry of accounts of Newman's holiness, Cornwell's subject is Newman's literary imagination. He writes that his "overarching purpose is to show that Newman's unrelenting literary obsession was the story of his own life: he was the ultimate, self-absorbed autobiographer."

One of the marks of an active literary imagination is a marked inwardness, bordering on solipsism. Cornwell suggests that Newman was characterized by such inwardness from a young age. He was raised in a comfortably religious, middle-class family in London in the early 1800s. By fourteen, he had read Paine's Tracts against the Old Testament, Hume, and Voltaire's denial of the immortality of the soul, after the latter of which he recollected "saying something to myself like 'How dreadful, but how plausible!' " In 1816, under the influence of his schoolmaster, Newman converted to a dogmatic evangelical Christianity. In his Apologia Pro Vita Sua, he writes that at this time he rested in the "thought of two and two only absolute and luminously self-evident beings, myself and my Creator."

In 1817, Newman set off to Trinity College, Oxford, where he would gradually drop Calvinist evangelicalism in favor of Anglicanism. It was also at Oxford that Newman was to develop his prodigious talents and astounding work ethic. (He recorded having once written for 22 hours straight while working on his Apologia.) Cornwell dubs Newman a "superabundant literary workaholic." While preparing to take his honors examination, he sometimes read fourteen hours a day. He may have studied too hard for his examinations, failing mathematics and taking a lower second-class honors in classics. But he rebounded in 1822, winning a fellowship at Oriel, at the time Oxford's most intellectually prestigious college.

Newman was constantly sorting his letters, organizing and reorganizing, essentially creating the story of his life. He once wrote, "It has ever been a hobby of mine (unless it be a truism, not a hobby) that a man's life lies in his letters." If this is the case, Newman lived a richer life than most; there are 20,000 extant letters. As Ian Kerr points out in his hefty biography of Newman, with so much of information the difficulty becomes what to include.

Newman's Unquiet Grave traces Newman's inwardness, developing literary style, and prolific output through the rest of his life. Readers gain an intimate portrait of his years as a tutor, his involvement in the Oxford Movement, his prolonged and tortured conversion to Catholicism in 1845, and his many years as an Oratorian priest, with Cornwell telling the story of Newman's life through his works. Cornwell nimbly shifts from critiquing Newman's poetry in his chapter on Newman's book-length poem The Dream of Gerontius to introducing the concepts of notional and real assent in a chapter on The Grammar of Assent. All the while, Cornwell mostly lives up to his goal of writing a "shorter, less academic account" of Newman's life—Ian Kerr's epic Oxford Lives biography runs to more than 700 pages—though it seems inevitable that any book on a theologian's literary imagination will smack of a certain specialization.