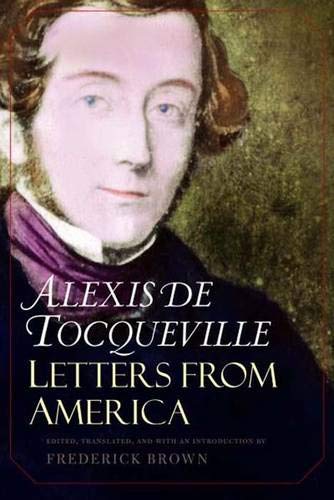 Shall I compare thee?
January 2011

Nearly every idea for improving higher education today is controversial except one: American students need to learn more about other cultures. It's not so clear that colleges think students need to learn much about the United States. (Let me know if you can find a major university website that promotes its teaching of America as enthusiastically as its commitment to globalism.) But can you really understand another culture without a deep appreciation for your own? I remember an Asian Studies professor begging his academic audience not to send students abroad until they understood America. They're too susceptible to what the intercultural experts call "reversal": a superficial denigration of their home culture and an equally superficial celebration of the new one.

By contrast, when Alexis de Tocqueville (1805-59) visited America in 1831-32, he was almost immediately overwhelmed by his own ignorance. He had had an excellent classical education, read the French philosophes, and sat under the brilliant history lectures of Guizot. During his first four years as an assistant prosecutor, he had prepared sixty legal briefs. And as the scion of an aristocratic family, he had grown up with stories of the guillotining of many of his relatives during the Terror. This is an ignorant man? And yet in these Letters from America, Tocqueville despairs that he cannot understand the United States because his "knowledge of France … [is] totally deficient." He complains that he doesn't "know what questions to ask because [I] don't know how France works, and the mind is stymied if it has no basis for making comparisons." Hold on to that last phrase for a moment.

Frederick Brown (State University of New York at Stony Brook) has published this book of letters from Tocqueville and his traveling companion, Gustave de Beaumont, to "furnish a stereoscopic picture of [their] voyage." We know that Tocqueville wrote his letters with a view to his later work: "The few general ideas I've thus far expressed about this country are in letters to family and one or two other French correspondents," he observes. And indeed, one finds in them the germ of his ideas on American materialism, religion, the family, and our frontier restlessness. But many of Tocqueville's other "general ideas" about American social mores, equality, voluntary association, and racial issues remain largely unexpressed in these letters. Tocqueville recorded more of such thoughts in notebooks, which he pondered for eight years before completing his two-volume Democracy in America (1835, 1840).

If these letters don't give a complete background to Tocqueville's research into America, however, they do provide significant insights—above all, into his mental habit of "making comparisons." Frequently named among the founders of modern sociology, Tocqueville is at his most insightful when he compares social phenomena: before marriage, American women are more independent than European women, while afterward they're more subservient; Americans solve communal problems by creating voluntary associations, where the English look to a nobleman and the French to the government; on the northern bank of the Ohio River the hum of industry is continuous, but work is typically viewed a curse on the opposite bank, where slavery exists.

Tocqueville and Beaumont, his good-humored fellow prosecutor, had managed to leave France after the Revolution of 1830 brought Louis-Philippe to power. Although the young men thought the July Monarchy was illegitimate, they took the oath of loyalty and began looking for a way of leaving France without endangering either their integrity or their loyalty. Since all of Europe was debating prison reform and everyone was interested in America, the two got a government commission to investigate the penal system of the United States. The trip was a pretext for their wider interest in studying American society, and Democracy in America abounds in reflections that bear on the possibility of a successful democracy in France. For example, "despotism can do without faith, but freedom cannot." Tocqueville doesn't long for the Sun King, but he warns his fellow intellectuals that skepticism cannot sustain modern democracy.

Although Tocqueville is continually worrying about his home country, this book shows that France provides him with the comparative vantage point he needs for understanding America. Just three weeks after his arrival, for instance, Tocqueville is astonished that, unlike himself and his countrymen, Americans think little about politics:

Here we are truly in another world. Political passions here are only superficial. The one passion that runs deep, the only one that stirs the human heart day in and day out, is the acquisition of wealth, and there are a thousand ways of acquiring it without importuning the state.

This letter demonstrates the habit of comparative analysis that he would later use to such brilliant effect. He's beginning to see that, unlike the French, Americans are developing a "social state" where material well-being is more important than politics, and where individuals seek distinction largely outside the political sphere. Only after years of reflection (and more conversations with American friends) would Tocqueville be able to explain how these characteristics grew out of Americans' dual commitments to equality and liberty.

The long selections by Beaumont establish beyond doubt that the pair were an "intellectual team," as Tocqueville scholar James Schleifer calls them. Beaumont's criticism of the treatment of the Indians anticipates Tocqueville's view, as does his (happily mistaken) Jeffersonian prophecy that most educated Protestants would turn Unitarian. But beyond their value in understanding Democracy in America, the letters are often simply delightful. To stay with Beaumont a bit longer, the comments on American fine arts are rife with comic snobbery: American theater is "frightful," its actors "detestable," its music "simply barbaric." Then there's our clothing: "of various colors, all loud." And to think we hadn't yet created the Hawaiian shirt.

Before my students go abroad I like for them to have studied their own country, preferably by reading Democracy in America. But in fact, many students don't begin thinking seriously about America until after they've been abroad. If travel has that effect on students, I can't complain. They're repeating Tocqueville's experience, after all.

Daniel E. Ritchie, director of the Humanities Program at Bethel University, is the author most recently of The Fullness of Knowing: Modernity and Postmodernity from Defoe to Gadamer (Baylor Univ. Press).