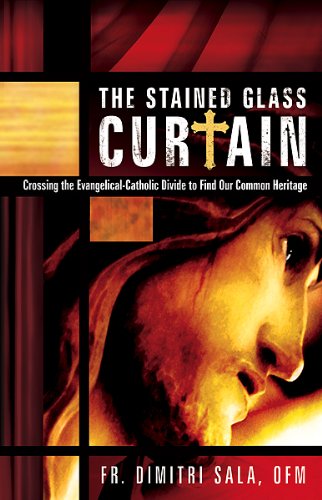 Bridge-Building Between Catholics and evangelicals.
February 2011

Dimitri Sala is a soul-winner who quotes the Bible with abandon, uses the Four Spiritual Laws as a guide in evangelistic conversations, especially wants to see young people born again, offers a convincing personal testimony about his own communion with God in Christ, reports special moments when God spoke to him (not in place of Scripture but driving home scriptural realities), has a special burden for evangelizing Roman Catholics, and recommends Martin Luther as an inspiring guide to a deeper walk with Christ.

Did I mention that Sala is himself a Catholic priest, and that the initials after his name stand for Orders of Friars Minor (aka, Franciscan)?

The Stained Glass Curtain is an effort by a dedicated bridge-builder to show evangelicals how much of the Catholic faith as defined by its official teachings is fully compatible with a very great deal of standard Reformation fare, why he feels a special burden to preach such a faith to his fellow Catholics (along with anyone else who will listen), and what sticking points remain between faithful evangelical Protestants and faithful Roman Catholics. From the very outsight of this passionate appeal, it is obvious that Father Sala thinks those sticking points should not be an impediment to cooperative evangelism, common worship, and united praise of a merciful God.

My impression after living among Catholics for several years is that Sala's approach represents only a small minority of contemporary Catholicism, but also that the segment of the Roman Church for which he speaks is growing, and that even more Catholics who do not exactly share his precise convictions nonetheless welcome his efforts as making a genuine contribution to their own communion and to bridge-building with evangelicals. It is noteworthy that one of the book's commenders is Bill McCartney, whose Promise Keepers movement shares much of Father Sala's ecumenical vision.

Thanks, Mark, for passing this along. Glad to see further confirmation of the kind of change you detailed in Is the Reformation Over?. May it continue to foster mutual understanding, breaking down the old caricatures on both sides of the divide. www.doxologyonline.com