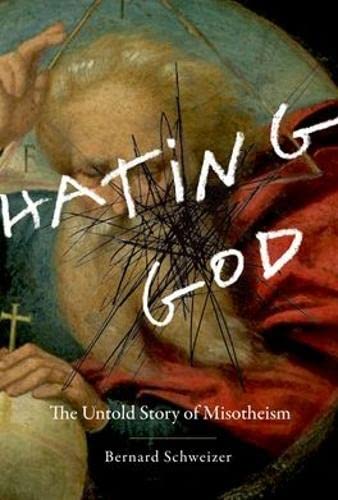 Hating God is a compelling chronicle burdened by an overblown thesis. Bernard Schweizer, a professor of English at Long Island University, contends that misotheism is the neglected species of religious dissent in the West. By "misotheists," Schweizer means those non-theists who, rather than object to God on epistemological or scientific grounds (a lá the New Atheists), object to him on moral grounds. They view God as the enemy of human flourishing—a cosmic sadist who is our greatest foe. Always subordinate to their ethical grievances against God, opinions on his ontological existence vary considerably.

Within misotheism, Schweizer defines two subsets: the agonistic misotheist, who speaks of God like a jilted lover, wants to believe in him but cannot for emotional or experiential reasons. In contrast, the absolute misotheist regards God as the chief adversary of man, fearlessly and unflinchingly blaspheming him.

Schweizer has written an engrossing history, weaving together seemingly disparate writers like French anarchist Pierre-Joseph Proudhon, African American novelist Zora Neale Hurston, and British author Phillip Pullman. It's not every day an author puts Hurston and Pullman next to each other and invites us to compare them. Yet this is what Schweizer does, and he does it quite well. His treatment of Hurston's passage reading "all gods who receive homage are cruel," is especially satisfying because it comes from one of the richest sections of Their Eyes Were Watching God but, as Schweizer documents, is often neglected in scholarly circles.

However, an argument is only as strong as its thesis, and it is here that Hating God struggles to defend its subtitle: "the untold story of misotheism." Perhaps Schweizer adopts this thesis out of a desire to reorient the contemporary discussion about God away from rigid empiricism and toward a more humanities-based approach. Or maybe he's following the line of other writers by distinguishing between the atheism of older writers like Nietzsche and the atheism of Richard Dawkins and Sam Harris (though if that turns out to be the case, his inclusion of playwright Peter Shaffer and Pullman is puzzling). In any event, the thesis is problematic for a couple reasons.

First, "misotheism" is hardly an anonymous, unknown tradition in Western literature. If it were, one would expect Schweizer to find far more obscure writers to develop his case. French novelist Albert Camus, Proudhon, English poet Percy Shelley, and English critic Algernon Swinburne are many things: exceptional writers, original thinkers, and historically significant in the development of Western thought. But they are not neglected.

Second, the attempt to demarcate "misotheists" like those mentioned above and the New Atheists, like Dawkins, Dennett, Harris, and Hitchens seems like a superficial, ephemeral distinction. To be sure, the emphases of Schweizer's misotheists and of the New Atheists are different. As Schweizer notes, the New Atheists often end up being more anti-theist than anti-God. However, beneath the ontological arguments of the New Atheists there often exists a strong ethical argument that echoes the arguments of Proudhon, Swinburne, and the other absolute misotheists. The ethics-based argumentation that views God as a moral monster is especially prominent in Christopher Hitchens' work. Therefore, the difference between the "New Atheist" Hitchens and the "misotheists"—especially the absolute misotheists—ends up collapsing.

If there is a difference between the misotheists and the New Atheists , it's not in their philosophy but in their preferred medium: The New Atheists generally tackle these issues directly in essays. Their books bear titles like The God Delusion and God is Not Great. The misotheists, on the other hand, make their case indirectly, through literature, through characters like William Blake's Urizen, Shelley's Zeus, or even the impersonal forces of nature, as in Hurston's Their Eyes Were Watching God. But surely this is more a product of historical context than any real, substantial difference in philosophy? If Shelley had published something like God is Not Great he could have been arrested for blasphemy. Indeed, when he published The Necessity of Atheism as a young Oxford student, he was expelled. If Hurston had aired a diatribe against God, instead of being simply a black woman trying to publish in 1937 (no easy task), she would have been a blaspheming black woman trying to publish in 1937. Given their historical contexts, it would be more surprising and noteworthy if these writers were explicit with their hatred of God.

In the end, therefore, Schweizer's book is an intriguing history with a muddled thesis. While he quite capably demonstrates that the misotheists opt for a different medium to present their views, he fails to show that their actual beliefs are substantially different from those of the contemporary New Atheist movement. In the end, we're better served to follow the lead of St. Paul in Romans: We're all innately god-haters. And some are saved to becoming lovers of God. It's a cleaner, simpler distinction, and one that has been familiar to Christians for 2000 years.

Jake Meador is a writer and editor living in St. Paul, Minnesota.