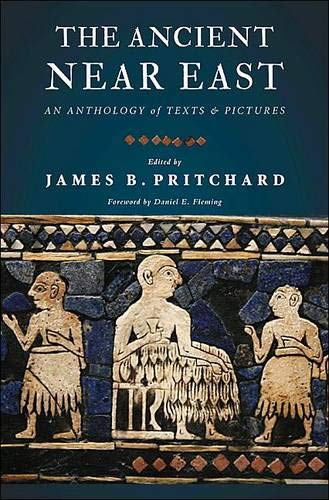 The Ancient Near East: An Anthology of Texts and Pictures

A helpfully reformatted reissue of a classic text.

In this fast-paced world, scholarship—even in old and dusty fields like ancient Near Eastern studies—has a relatively short life span. Each year new texts are unearthed, new interpretations are offered, and existing theories are debunked. However, a handful of resources remain valuable after several generations of scholars have long since retired. Included among these are the anthologies of texts and pictures introducing the ancient cultures of the area extending from modern Iran to Egypt edited by James Pritchard from 1950-1969. He assembled two paperback volumes intended to orient readers to the cultural and religious contexts in which the Hebrew Bible was written. Now, Princeton University Press has reissued this material in one integrated volume that reorders the texts in a more user-friendly fashion than the original volumes.

Pritchard enlisted some of the best scholars of his day to translate myths from Mesopotamia, novellas from Egypt, and calendars from Palestine. They provide an amazing backdrop to reread, and in some cases reinterpret, the Bible. Furthermore, the translations themselves are works of art. Sure, we could quibble here and there with the way various passages are rendered, but these transgressions are quickly forgotten when one encounters turns of phrase such as this: "We do … obeisance to the Progenitress of the Gods."

These translations have staying power. Not only do they convey the cultural environment of the biblical world but they do so with elegance and timelessness. The translators achieved an admirable balance of fidelity to the original compositions and imaginative creativity. This is not merely a reissue of a handbook of ancient texts and pictures; rather, it is a fitting homage to translations expertly done and thus still of use.

Charles Halton is an Instructor of Old Testament Interpretation at Southern Seminary in Louisville, Kentucky. He edited the cuneiform tablet collection at the Carnegie Museum of Natural History in Pittsburgh and he writes regularly about biblical and ancient Near Eastern studies.