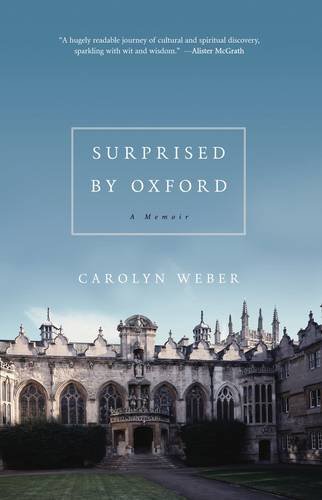 Several Mr. Holland figures (along with a tall, dark and handsome American son of a missionary) wend their way in and out of author Carolyn Weber's poignant memoir Surprised by Oxford, but the first and arguably most enduring is Dr. Deveaux, a professor of 17th-century poetry during the then-Carolyn Drake's undergraduate years at a school in her native Canada.

Drake was reared by a mother with very loose, cultural ties to the church and a mostly absent, unreliable father. She emerged agnostic with a strong sense that she knew who her master was: She was her own.

Deveaux, by contrast, was an evangelical, though in the book Weber acknowledges that she would have had no understanding of that label at the time she studied under his tutelage.

Responding to Miss Drake's assigned reading of John Donne's Sonnet XIV and her argument for the poem's "classic subversion by the dominant patriarchy … of the threat posed by maternal power, or the feminine spiritus," Deveaux challenged her reading, insisting that she didn't get the point; that she had not untied a subtle and very important knot in Donne's message.

"The truth is in the paradox, Miss Drake," Weber writes in recounting Professor Deveaux's retort. "Anything not done in submission to God, anything not done to the glory of God, is doomed to failure, frailty, and futility. This is the unholy trinity we humans fear most. And we should, for we entertain it all the time at the pain and expense of not knowing the real one."

Deveaux's comeback did not stop there. In salty language that reminded me of many a professor I've encountered, Deveaux continued: "The rest is all bullshit, Miss Drake. It's as simple as that. And your purpose here in life is to discern the real thing from the bullshit, and then to choose the non-bullshit."

Shortly thereafter, Carolyn Drake matriculated to Oriel College at Oxford University, where, leaving a fellow agnostic fiancé back in Canada, she began work toward her Masters of Philosophy, focusing on writers such as Coleridge, Goethe, Blake, Keats, Shelley, Wordsworth, and Byron. Through a series of encounters with other Mr. Hollands and just as many anti-Hollands, she cut through the B.S. and found her purpose, just as Deveaux challenged her to do.

That journey is recounted in Surprised by Oxford, a memoir of Weber's first year there, which is also the story of her conversion. Her narrative is structured around the terms of the school's academic year, embedded in the Christian liturgical calendar: Michaelmas, Hilary, and Trinity, with interludes around Christmastide and Eastertide. Weber's debt to C. S. Lewis' Surprised by Joy is acknowledged in her title, but Surprised by Oxford is different in many respects from Lewis' memoir, with a significantly more truncated time-frame, much faster pacing, and more troubled childhood roots that set up the book's narrative and tension. It also has hints of Francis Thompson's The Hound of Heaven, with God seemingly pursuing Weber at every turn, not only through some of her professors but also via a madcap group of friends (believers and skeptics alike) who frequent the famous Oxford pub Eagle and Child for conversations about the meaning of life—and the music of U2. Finally, Surprised by Oxford has elements of a romantic and yet believable love story through the challenging and consistent witness of that tall, dark, and handsome figure that the author calls simply "TDH" throughout. The love story is an element essential to the book's conclusion, but one that Weber never allows to become dominant or distracting.

Surprised by Oxford is, in short, a moving portrait of one woman's intellectual and spiritual conversion. It is a story for all of us who find ourselves uttering on occasion, with the father of the ill son in the Gospel of Mark, "Lord, I do believe; help me overcome my unbelief!"—a prayer that proved to be a centerpiece in Weber's conversion.

"That man's desperate plea for the overcoming of his unbelief echoed deep within me, leaving nowhere to hide," Weber writes. "God had called out even this very last façade, this trump card of an excuse, this very final resting place of despair. And it appeared that for us particularly hard nuts to crack the only answer is prayer."

And so she prayed.

And so she believed.

Ultimately, Weber was baptized in the River Thames on Trinity Sunday of Trinity Term, just after a service at St. Ebbe's Church. At the end of her baptismal day, she sat on an old bench by the river and opened a gift from one of her madcap friends, Hannah. On the underside of the gift box were the words from Milton's Paradise Lost in Hannah's handwriting. They read: