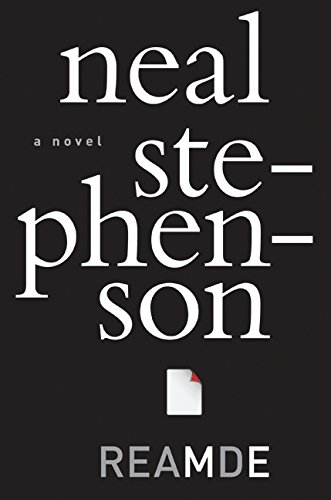 This is Neal Stephenson's all-American novel—his apple-pie, red-white-and-blue book about the U.S. of A. in all its purple mountains' majesty. Yes, its heroine is a Eritrean refugee named Zula, its hero a software mogul who's abandoned his native Iowa for Canada, and its bad guys include Russian mobsters, Chinese hackers, and Al-Qaeda terrorists. For that matter, much of the action happens in the fantasy land of an online role-playing game called T'Rain.

Still, the real subject of Neal Stephenson's new Reamde is America. Maybe more the gonzo-crazy land of Hunter S. Thompson's drug-fueled imagination—or the unpredictable, hog-stomping, baroque nation of Tom Wolfe's quick eye—than the small-town American dream of Hollywood, but nonetheless a world in which, when one of their own is threatened, Idaho survivalists, Seattle hipsters, midwestern evangelicals, and motorcycle-club marijuana smugglers combine to save the day. Because, as near as the novel comes to an explanation, that's what Americans do: When things go bad, they pick up their guns and ride to the rescue.

A paean to American gun culture—a paean to any kind of American culture—is not what readers expect from the 52-year-old Stephenson, a long-form novelist commonly called a science-fiction writer, for lack of any better way to categorize his work. When he published in 1992 the book that first made him famous, his post-American futuristic tale Snow Crash, he seemed the wildest, fastest, most complex science-fiction writer around, but hardly a cheerleader for America.

The 1999 Cryptonomicon seemed to confirm the point, as he told a complex story about gold, Nazis, and Alan Turing, all while folding in a wide-ranging exploration of the implications of computers for human behavior. With the three volumes and 2,600 pages of The Baroque Cycle, published from 2003 to 2004, he cast back again in history, retelling the entire birth of modern science, economics, and sex. In the 2008 extraterrestrial Anathem, he set out to novelize the epistemology of certainty and the metaphysics of time.

The apparent lack of similar philosophical complexity has produced a fairly general condescension toward Stephenson's latest. Reviewing the novel in Salon, for example, Andrew Leonard waves away the book as beach reading: "Whereas in past novels the filigree would reflect deeper structures in unusual and provocative ways, in Reamde the filigree is just filigree. There's nothing beneath the baroque surface." The problem, finally, is that Stephenson seems to have given up his scientific and mathematical fascinations, and "there are no equations in Reamde."

The origin, I think, of this reaction is an unconscious refusal of Stephenson's overwhelming, if somewhat peculiar, tribute to American character. Despite the opening chapter's fifty-page tour de force—an account of a holiday get-together on an Iowa farm, probably the best writing the author has ever done—the reviewers seem insistent that the topic is too slight to bear the weight of Stephenson's heavy vision.

So they look, instead, to the science-fiction element of T'Rain, the novel's role-playing game that Stephenson roughly based on the real-life—or, rather, real-life second-life—game known as World of Warcraft. Reamde's expositions of the financial, literary, and cybernetic construction of such online virtual realities are interesting, but the hidden piles of gold in T'Rain operate, in truth, only as a MacGuffin for the plot. If that's where you look for the depth of Stephenson's insight, you're bound to be disappointed. And Stephenson needs a MacGuffin because Reamde is, in structure, an adventure story, straight out of the John Buchan playbook. It's worth, I guess, laying out that plot, in all its baroque twists and turns.

Reamde—pronounced "ream-dee," the mistyped title of a "Read Me" file emailed to victims of an elaborate online scan involving the T'Rain game—opens with the fortysomething hero, Richard Forthrast, visiting his family in Iowa for Thanksgiving. They're good American farmers, for the most part, but the cousins and inlaws and nieces and nephews, the adopted children and significant others, have extended the family into a microcosm of the nation.

Richard started out a marijuana smuggler and footloose wanderer through the American landscape, but along the way he helped develop a software enterprise that has become a Fortune-500 company and left him enormously, if somewhat ironically, rich. His wealth turns out to be useful, when, in short order, his adopted niece Zula is kidnapped in British Columbia by a gang of Russian mobsters, who take her to China. Which is where she's recaptured by Al-Qaeda terrorists, who take her to the Philippines, because they want to use her to help them blow up Las Vegas.

At least, I think it was the Philippines; I got a little lost in this part of the story. Regardless, Zula is soon plane-crashed in Canada and forced over an old smugglers' path into Idaho, where the more survivalist part of her family happens to live. Gunfire ensues, and America proves astonishingly resourceful and resilient in responding to the crisis of having their relative treated this way, even if she is an adopted Eritrean refugee who has grown up to become a straightforward metrosexual of the Seattle coffee-bar type.

The cause of all this is a bunch of teenage Chinese hackers in the city of Xiamen who have launched the file-locking Readme virus. They'll unlock the victims' files only for money paid in virtual funds inside the world of T'Rain. Unfortunately, one of those whose files get locked is Zula's boyfriend Peter, just as he delivers a file of stolen credit-card numbers to Russian gangsters.

You can see, of course, what has to happen next. The Russians carry Zula and Peter to China to confront the hackers, Richard works frantically to identify the hackers from within the game, and the extended Iowa family mobilizes to rescue her. The Al-Qaeda plot turn was a little bit of surprise—where, exactly, did these terrorists come from?—but, thematically, they're necessary: Reamde is an American adventure story, and it needs a genuine enemy of America to keep the pot boiling.

Even all this wouldn't fill the book's 1,056 pages if, along the way, Stephenson didn't engage in the long digressions that have always been his trademark. We're treated to the economic landscape of a modern Chinese city, the complications of international air space, the continuing James Bondian work of British agents, the internal enforcement mechanism of the Russian mafia, the peculiarly ebullient lostness of post-communist Budapest, and the mountainous geography of the U.S.-Canadian border.

Plus, of course, the 185-page gun battle that concludes the book, about which nearly every reviewer has complained. A sympathetic reading, however, might suggest that the lengthy conclusion is no more incidental to the author's project than the book's opening fifty pages of Americana. For a futurist and computer enthusiast—for a man routinely classed as a writer of science fiction—Neal Stephenson proves himself in Reamde to be an astonishingly old-fashioned sort of author. He's trying to write an American novel, like someone wandered into 2011 fiction out of the 1950s. He wants to find the soul of the nation, and he wants to see what makes Americans think they deserve to win against the likes of Al-Qaeda.

The answer he comes up with is a combination of ones we've heard before. Americans are simultaneously weird and conventional, violent and peaceable, rule-bound and mistrustful of authority, self-reliant and deeply religious. They're also very, very nice, and Stephenson finds himself liking them—rather, one suspects, to his surprise. Certainly to the surprise of his reviewers, who were looking for something, anything, else.

Joseph Bottum is a contributing editor to The Weekly Standard and the author most recently of The Second Spring: Words into Music, Music into Words (St. Augustine's Press). His slice of memoir, Dakota Christmas, was recently released as a Kindle Single.