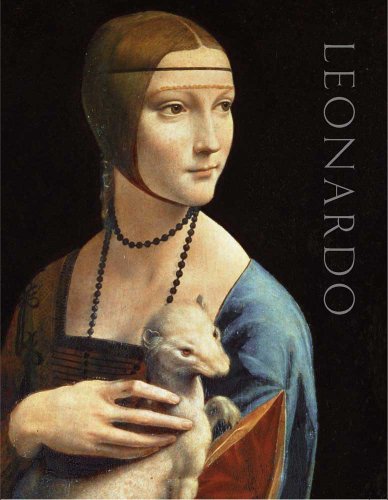 The show has been sold out, every ticket, for every day of its four-month run, since before it even opened its doors. That is a phenomenon more commonly associated with U2 concert tours or limited-run Broadway musicals, not stately, informative expositions of old pictures. But London's National Gallery has a show on now that lives up to the hype, one which is well worth trying to sneak in to see. Next thing you know, there will be ticket-touts in three-piece suits outside the gallery doors, scalping tickets for ten times the asking price to desperate fans. And I wouldn't blame them, because this is one heck of a show.

"Leonardo: Painter at the Court of Milan" (November 9-February 5) is the largest exhibition of the work of Leonardo da Vinci ever displayed. Before this exhibit, Leonardo had only eighteen universally agreed upon portable paintings attributed to him. A newly discovered Leonardo, once part of King Charles I's art collection but then lost, also appears in this show, bringing the total to nineteen worldwide. Nine of them feature here.

Most art museum shows come in one of three varieties. There is the survey, in which works are gathered together so that they may be admired and studied in one place. These surveys might cover a style (Mannerism in Ferrara), an artist (El Greco), a period and place (1920s Paris), or a chapter in an artist's career (Picasso's Blue Period). Another category is the star-turn, a first chance to display a famous work in a new location. The best-known instance was the tour of Leonardo's Mona Lisa (understandably not included in this London exhibit, otherwise there would have been stampedes and riots to get in), which was displayed in Italy after it was recovered from the thief Vincenzo Peruggia, and visited Japan and the United States in the 1960s and '70s. Finally there are exhibits that are primarily informative rather than crowd-pleasing, the sort that expect you to read all of the wall copy, and perhaps the catalogue, shows that you slowly imbibe rather than rush through. Shows with titles like "Tile-Making in 17th century Delft" may be lovely and are certainly educational, but they have a rather more limited popular appeal, and are in no danger of selling out prior to opening. Most museum shows fit the third category, fulfilling the role of museum as preserver and educator, not primarily as entertainer. But "Leonardo: Painter at the Court of Milan" embodies all three in one gorgeous package—and the catalogue that accompanies it is both gorgeous and richly informative.

This show gathers all of the extant paintings that Leonardo worked on during his tenure at the Sforza court in Milan (1482-1499). The only exception is the immobile and precariously preserved Last Supper, a wall painting represented here by a very good full-scale copy in oil on canvas by Giampietrino. This copy, made circa 1520, is actually far easier to see than the original, which has lost so much of its detail. In addition to the nine Leonardo paintings, assorted drawings and pictures from his circle bring the total works on display to a meaty ninety-three.

The resulting show is educational, if one can hack one's way through the throng of white-haired, well-dressed museumgoers and get close enough to read the wall copy and admire the details of the small drawings that flesh out the exhibit. When I went, I was the only person I could see who was under the age of fifty. But since I was significantly taller than most of my fellow visitors, I had a good advantage. Such crowded exhibits, full of waiting and arm-jostling, exact their toll, but when something this good comes along, an exhibit that may indeed be once-in-a-lifetime, it's worth fighting for.

Without doubt the highlights of this show are the Leonardo paintings, to such an extent that the drawings and paintings by others in Leonardo's circle, such as Boltraffio (who seems to have been completely fascinated by puffy-lipped youths with a slight overbite), feel like filler. That's a shame, because every piece in this show is of interest. I had no appreciation for Boltraffio before it, and now I do (despite the lips, or perhaps because of them). But the tidal wave of visitors thunders from one show-stopper to the next, and there are plenty of them to be found.

If there's one reason above all others to see this show, it's the chance to admire "Lady with an Ermine (Portrait of Cecilia Gallerani" (1489-90), which is normally housed in Cracow—not on everyone's traffic pattern. This picture is every bit as nuanced and wonderful as "Mona Lisa," and I would have been content staring at it alone for a good hour. The sense of welcome, anticipation, and excitement is heightened by knowing just how hard it would be to ever see this work again. Were it in Paris or Rome or Madrid one might be able to convince oneself that there would be other times when it might cross one's path. But people fly to Cracow specifically to see this work, and having seen it in person for the first time here, I can say that it is worth the journey.