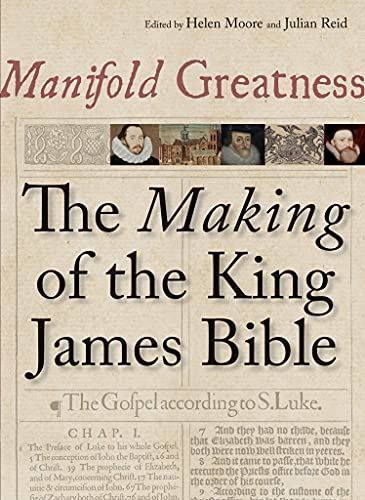 Manifold Greatness: The Making of the King James Bible

To Make a Good One Better

The latest in this "Year of the KJV."

Seeing that book, there in that place, I recognized the irony but preferred not to face it. In fact, there were multiple ironies. There I was, in the front room of Blackwell's Bookshop, that Oxford landmark on Broad Street renowned among English-language booksellers. (Its vast Norrington Room downstairs contains an inventory of books sufficient to boggle the mind.) I was half navigating around clusters of summer tourists and half browsing new books on the display tables. Among titles by A. N. Wilson, Alexandra Harris, and Robert Hughes, there was a colorfully illustrated title I'd been hearing about, It's a Book, by Lane Smith, a past recipient of the Caldecott Medal for children's books. It's a Book may be pitched to children, but its sly wit will be especially appreciated by parents or adults, or at least those who care to think about ongoing changes in reading habits, entertainment preferences, and literacy itself. In Smith's book, a monkey and mouse try to convince a donkey, who is a highly digital gamester and web browser, of the imaginative attractions of an unassuming object, the book. The donkey is mystified by such a simple technology. How do you scroll down? he asks. Can you blog with it? Do you need a screen name or password? No, and no mouse or batteries needed, either. The book is indeed, as its product description promises, a "delightful manifesto on behalf of print." Yet, to encounter this book inside Blackwell's, a veritable cathedral of printed books—it does give one pause. Smith's book is witty, but in the current climate, it also has an unsettling edge. The distracted donkey's clueless questions don't sound outlandish enough, you might say. They sound all too askable, by children who know no better and by adults who have forgotten the benefits and pleasure of reading beyond tweets, Facebook posts, fan blogs, official websites for this or that cultural product—basically any splotch of text bereft of substance or challenge. As for children, I fear that their default author will increasingly be Ralph Lauren—no, not some new writer of young-adult novels, but the clothing company. I recently saw an ad for The RL Gang, "The first-ever online shoppable storybook series for children." Online may come with the reading territory these days, but "shoppable"? Maybe this is just what the beleaguered book needs—to become a more thoroughly monetizable vehicle.

It's a Book may be celebratory, may be a spiky kind of defense, but it is tremendously different in tone from a similar kid's volume of twelve years ago, George Ella Lyon's and Peter Catalanotto's Book. This precursor, which might best be described as trippy, features children in nightclothes floating through the cosmos of imagination, or peering into a giant front cover of a book (whose interior is lit up as if it were a refrigerator full of radium) or surrounded by wild animals or swinging from letters as if from a jungle gym. It features text such as, "A BOOK is a CHEST that keeps the heart's treasure. Lift the plain lid and look in." In short, it equates the flights of reading with the hallucinogenic effects of recreational drug use. Now, there is at least one rip-roaring, kaleidoscopic page sublimating the reading experience in It's a Book, but it's the fleeting exception. The bottom line remains with the skeptical, mainly disappointed donkey, and the plain book he keeps holding a little awkwardly. In other words, ten years of the Internet and Kindles and iPads feel like a long time. Defense or no, It's a Book does not entirely keep away that culture of gurneys and death-row vigils that prevails in the publishing industry nowadays. So it was a little odd to encounter this picture book first in Blackwell's, one of the few places where some of those bleak realities of reading may be pleasantly if briefly forgotten.

And then there was a second irony, another curious mash-up of paradox and proximity. Across from Blackwell's, a few hundred yards down Catte Street, just past the Sheldonian Theater and within the Bodleian Library's Old Schools Quadrangle, the Exhibition Room featured a summer display dedicated to one of the most enduring printed books in history, the King James Bible.

First published in 1611, this particular Bible has been the subject of countless appraisals and appreciations during its four-hundredth anniversary this year. This fall, Union University held "KJV400: Legacy & Impact," a conference where Union faculty members responded to panelists' papers, and Wheaton College hosted "Words of Delight," a conference on the KJV and the Bible in English, held in honor of Leland Ryken and featuring lectures by scholars such as David Lyle Jeffrey, Mark Noll, Alister McGrath, and Ryken himself, as well as an exhibit of rare Bibles and biblical artifacts from the Green Collection. Other major conferences have already occurred at Baylor University, The Ohio State University, and the University of York, and surely a highlight among anniversary events was this spring-summer exhibition at Oxford, along with its partner event focusing on the "Creation and Afterlife of the King James Bible," which opened on September 23 at the Folger Shakespeare Library, Washington, D. C. (free admission, and running through January 15). These two world-class libraries have also collaborated on a handsome exhibition catalogue, Manifold Greatness: The Making of the King James Bible.