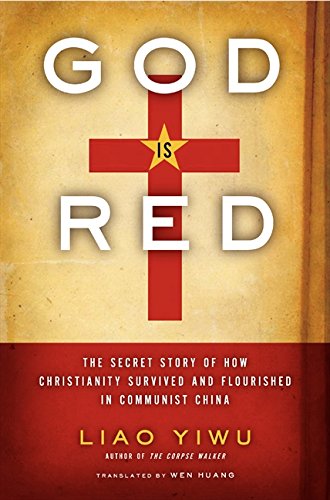 God Is Red: The Secret Story of How Christianity Survived and Flourished in Communist China
Liao Yiwu
HarperOne, 2011
256 pp., 25.99

Plus: Books & Culture's Book of the Year

This was a very good year for Books & Culture contributors, starting in January with Makoto Fujimura's The Four Holy Gospels. I can't begin to list them all (apologies for the many omissions), but here is a sampling of books that merit your attention: Amy Julia Becker, A Good and Perfect Gift: Faith, Expectations, and a Little Girl Named Penny; Alan Jacobs, The Pleasures of Reading in an Age of Distraction; Timothy Larsen, A People of One Book: The Bible and the Victorians; John McWhorter, What Language Is; Mark Noll, Jesus Christ and the Life of the Mind; Naomi Schaefer Riley, The Faculty Lounges: And Other Reasons Why You Won't Get the College Education You Pay For; and Randall Stephens and Karl Giberson, The Anointed: Evangelical Truth in a Secular Age. Congratulations all around.

To make up my list of favorite books, including B&C's Book of the Year, I follow a routine that an old-fashioned Surrealist might approve of: I enter a waking dream, registering (in not quite automatic writing) the titles that first come to mind from a year's reading. I hope you'll find a title or two here to add to your own list. And all best wishes as you celebrate the birth of our Savior.

Apricot Jam: And Other Stories. Aleksandr Solzhenitsyn. + Bowstring: On the Dissimilarity of the Similar. Viktor Shklovsky. Two Russian masters. Solzhenitsyn's late stories come in pairs ("binaries," he called them) that play off each other. A bonus story, the ninth, was translated by AIS's son Stephan. Shklovsky's book was published in the USSR in 1970, when he was 76, and is available (at last!) in English translation, thanks to Shushan Avagyan and the Dalkey Archive Press. It's a look at how literature works, and literature's relation to life. Both books draw on a lifetime of memory, experience, and hard-won wisdom.

The Curfew. Jesse Ball. I keep waiting for Jesse Ball to become famous. His novels are fresh, in a voice that's his alone. Maybe fame will come soon: a mixed blessing. Also published this year: The Village on Horseback: Prose and Verse 2003-2008.

The Dream of a Broken Field. Diane Glancy. A Native American writer: poet, novelist, playwright, often cross-breeding genres, as here, in these fragments of autobiography. A faithful Christian: "More than anything, I have longed for another …. It is because I am incomplete in myself that I have believed."

The Drop + Fifth Witness. Michael Connelly. A new Harry Bosch novel and a new Mickey Haller novel. Question: Why do so few end-of-the-year lists ("Best of") include any crime novels or thrillers?

11/22/63. Stephen King. + The Girl in the Polka Dot Dress. Beryl Bainbridge. JFK and RFK (the latter admittedly in the background). A master of maximalism and a master of the oblique. An American and a Brit. Both extraordinary. Bainbridge, dying, tried to finish her last book, nearly did. I'm thankful to have her almost-completed novel to bookend with King's big book.

On Conan Doyle: Or, The Whole Art of Storytelling. Michael Dirda. There's Sherlock on the BBC, and the new Holmes movie (the great detective as action hero), and a whole shelf of pastiche—House of Silk is better than most; see also A Study in Sherlock—but indisputably the pick of the lot is Michael Dirda's seductive little book.

Open City. Teju Cole. The most interesting new writer I encountered this year. (Keep an eye out for Alissa Wilkinson's review in the Jan/Feb 2012 issue of Books & Culture.)

Parts of a World. A. G. Mojtabai. A late masterpiece. (Here's a column devoted to the book.) If you haven't read Mojtabai, start at the beginning.

Scenes from Village Life. Amos Oz. + This Road Will Take Us Closer to the Moon. Linda McCullough Moore. Two collections of linked stories, the first a dark, uncanny report from Israel , the second a life in condensed form (leaving the blank spaces blank). Even better when read together. (Warning: the last story from Oz, a coda of sorts, left me nonplussed. Maybe I missed the point.)

Books & Culture's Book of the Year:

God Is Red: The Secret Story of How Christianity Survived and Flourished in Communist China. Liao Yuwi. Like nothing you have read about Christianity in China. Inspiring, beguiling, consistently surprising, with a quirky literary sensibility and a complete absence of hype. (Tim Stafford's review will appear in the March/April issue of B&C.)

Greg, I think you need to get a copy for yourself. It's a remarkable book.

William, I'm happy to make the acquaintance of a fellow reader of Jesse Ball. I think you will enjoy his other novels as well.