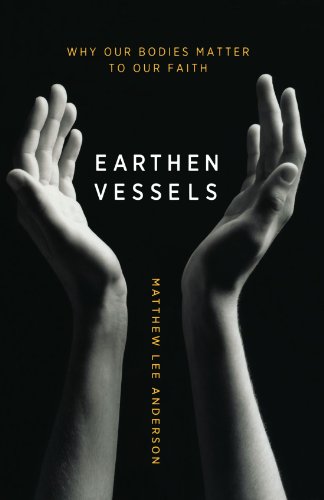 Evangelicals and their bodies.

If you only glanced at the table of contents in Matthew Lee Anderson's Earthen Vessels you could be forgiven for asking "Is this book really necessary?" While Earthen Vessels presents itself as an evangelical theology of the body, Anderson's book is less that and more a topical exposition of a Christian view of the body regarding very specific questions such as tattooing, sexuality, and burial versus cremation. On these matters, evangelicals have spent no small amount of ink and pixels making their views known. Yet if prospective readers dismissed the book on grounds of redundancy, they'd rob themselves of a chance to see the discussion reframed in some very helpful and interesting ways.

For Anderson, the lead writer at Mere Orthodoxy, the underlying difficulty for evangelicals has been the failure to ground our views on issues involving the body in a well-developed, holistic view of the body. It's like knowing what a "sycamore" is but being incapable of defining "tree" or "forest." Therefore, the first quarter of the book is taken up with trying to give a big-picture understanding of the body, which we can then apply to specific questions.

First, Anderson seeks to develop a Christian view of the body, stressing its goodness as seen in the Creation and Incarnation. He then discusses the body's fallen state and how the Christian faith revitalizes and renews "our place of personal presence in the world." In many ways, Anderson's discussion is a restating of the views espoused previously by his two intellectual heroes, C. S. Lewis and G. K. Chesterton. Lewis, borrowing from Francis of Assisi, referred to his body as "brother ass." Lewis explains: "Ass is exquisitely right because no one in his senses can either revere or hate a donkey. It is a useful, sturdy, lazy, obstinate, patient, lovable and infuriating beast; deserving now the stick and now a carrot; both pathetically and absurdly beautiful. So the body."

In contrast, Anderson argues, the contemporary West has adopted a "technocratic" understanding of the body in which the body is an instrument to be improved in whatever ways that body's "owner" desires, provided those modifications don't harm another human being. It's a machine that we design and create through various techniques. As an extreme example of this, he cites the case of Brisa Johnson, a woman who vowed on Twitter to undergo "head-to-toe" plastic surgery in order to look like Kim Kardashian to prevent her husband from leaving her. Anderson comments, "This is where self-expression, technological proficiency, and social fragmentation have led us. The iron law of our age is that our bodies are our own and we can choose to do with them as we please on the single condition that no one is harmed." He continues, "The end result is that the decisions we make about the body are almost always grounded in therapeutic reasons—what makes us feel fulfilled or complete or happy—rather than through determining whether there are any objective standards that should guide our decision-making."

With that foundation laid, Anderson examines specific issues in subsequent chapters. Among the issues discussed are tattoos, sexuality, homosexuality and the church, online church, spiritual disciplines, and death rituals. Of all the topical chapters, the most satisfying and interesting is his discussion of tattoos.

On this issue, Anderson deals with a subject where the church has traditionally held to a certain viewpoint but where younger evangelicals have tended to deviate from that view. Where the church traditionally has been leery of tattoos (and no one was more leery of them than earlier American evangelicals), today being tatted up is practically a prerequisite for anyone wanting to be a pastor in a young, trendy, urban church. It's so common that it's even reached the point of being parodied, as in North Point Media's "Sunday's Coming" video spoofing younger evangelical mega churches. Though he stops short of condemning tattooing outright, Anderson offers two points to push back against the growing ubiquity of tattoos.

In the first place, Anderson argues, tattooing often signifies a highly individualized approach to personal identity whereas Christianity, with its emphasis on the church, would seem to encourage a more communal approach to personal identity. Anderson: "The goal with tattoos is customization and uniqueness, something that expresses the core of the individual's values, personality, or identity. Even while Christians often use an iconography drawn straight from the Christian tradition, the expression is almost always tied to the individual's personal encounter and relationship with God. The cultural logic, then, of tattoos depends upon the body being a canvas for our self-expression, a lump of clay which we style in ways that express the hidden core of who we are." Here, he returns to his earlier discussion about the technocratic body, the body as something we make through the use of technique, saying: "Tattoos are an aesthetic technique … melded with a contrarian aesthetic and applied to our own bodies."

What sets Jake's review apart from others is that he pays close attention to "how" Earthen Vessels is written, which matters as much as "what" is written: the generalist approach ("less [an evangelical theology of the body] and more a topical exposition"), the organization ("feels like two different books or perhaps a collection of blog posts"; "the topical essays wander at times and Anderson sometimes loses the plot"), and the style ("a sermonic tone that favors clever turns of phrase over more precise argumentation"). Having read a sizable portion of the book, I share Jake's observations/criticisms. Compared to the technocratic uses of the body in our society and churches, we can thankful that Matt pushes us to be more thoughtful and deliberate, even if we disagree about whether the general, big-picture perspective of Scripture yields specific instructions on some of the questions, such as "to be tattooed or not?" "to cremate or bury?"