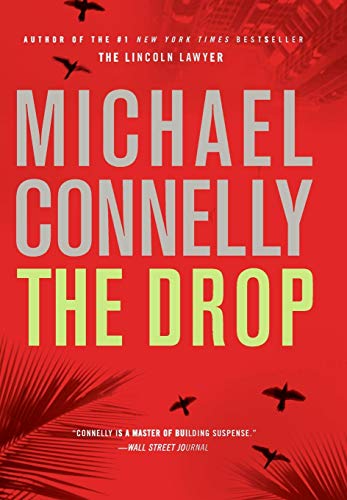 Harry Bosch is hassled by an old foe.

For decades, Irvin Irving has had it in for Harry Bosch. Back when Irving was deputy chief of the LAPD, he could easily make the young detective's life miserable. Now that he is on the LA city council and Harry is the oldest detective in the Open-Unsolved Unit, hassling Harry is a bit more difficult. But in Michael Connelly's newest Harry Bosch novel, Irving seems to have found a way to do it—even at the cost of possibly exposing Irving's own corrupt dealings.

The title of The Drop could refer to some of the book's central questions: Was Irving's middle-aged son dropped off the seventh-floor balcony of his hotel room? Or did he jump? And in either case, why? Strangely, Irving has insisted that the chief of police put Harry in charge of the investigation. It is obvious to Harry that city politics—"high jingo"—is in some way involved, but who is screwing whom? If he could get out of this assignment, he would do so in a heartbeat.

Harry is much more interested in another case that involves a different kind of drop: a drop of blood recovered from the neck of a woman who was raped and murdered 22 years ago. The lab has just matched the blood to the DNA of a known sexual predator. Normally such a match would make OU detectives rejoice, but this time there's a problem. The blood belongs to a person who was only eight years old at the time of the crime. Which brings up another set of questions: Did the department send the wrong sample? Did the lab make a mistake? Could mishandled evidence taint the case and allow a killer to go free?

Harry is assigned to both cases on a day when he is thinking about yet another DROP—the Deferred Retirement Option Plan. He is 61 years old and has been officially retired for nearly ten years. After a couple of years working as a private investigator, he returned to the department for a seven-year term under the auspices of DROP. Now he has applied for an extension, at the end of which—assuming he gets it—he will have no choice. There are no second extensions. He will have to retire. Knowing that his days as a detective are numbered, he thinks about what gives his life meaning.

As readers of Connelly's 16 other Harry Bosch books well know, Harry is a man with a mission: equal justice for all. "Everybody counts or nobody counts"—this is the code he lives by. A teenaged girl murdered on her way home from the beach deserves the same impartial treatment as a powerful politician's son who dies in a posh Hollywood hotel. But Harry's orders are to focus on Councilman Irving's son, and that goes against the grain. Can he follow orders and be true to his mission? And if he adheres to his code and disaster ensues, can be live with the guilt?

What's more, Harry now has a second mission. In 2002, he learned he had a daughter; a couple of years ago, she came to live with him. For the first time, the crusty old cop cares about a person even more than he cares about his work. Can he give Maddie the attention she needs and still do his job? Does his job force him to take risks that a single parent has no right to take? "I don't know," he says to his daughter, "but maybe … I should get out. I've seen people lose their edge and it increases the danger. I don't want to miss the chance to see you grow up and shine at whatever you decide you want to do."

Oh, and speaking of giving his life meaning—is Harry falling in love again?

For most of The Drop, Harry works his two cases, trying to give adequate attention to each while pondering work, love, evil, and what to do next with his life. The pace is a bit slower than in previous Harry Bosch novels: absent are shoot-outs, chase scenes, forays into the Las Vegas underworld. Harry still does not play well with others, but he's mellower than he was, not quite as brash, a bit world-weary. Maybe he really will retire, I said to myself. Maybe this will be the first Harry Bosch book ever without a sudden surprise ending. Now that would be a surprise.

Well, I won't spoil the surprise. I'll just say that Harry has always found it hard to trust others, and this book's events seem to justify his cynicism. Whatever he eventually decides about retirement, there's enough unfinished business here to keep him working through at least another episode. And yes, even though he's past 60, Harry still has hair-trigger reflexes.