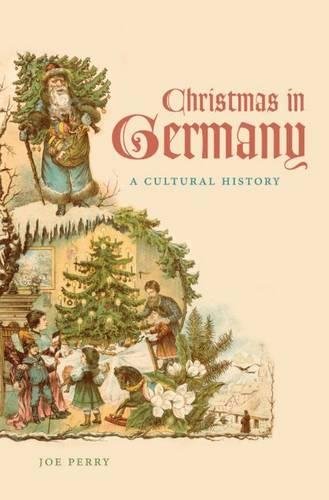 The creation of a "national space."

After the economic collapse and street-fighting of the early 1930s, the Nazis made it a big point to restore family values to a holiday they perceived as over-commercialized and wanting in community spirit. And yet, as Joe Perry carefully shows in his Christmas in Germany, complaints about the shallow materialism of Christmas predated Hitler's Christmas by a good century. This is not the story of how the Nazis stole Christmas. Perry manages to resist such low-hanging fruit, even as he documents patriotic and jingoistic holiday celebrations. He has a bigger story to tell: of the very creation of a modern space.

Christmas, as a middle-class holiday, has been hotly contested for generations. Over the course of the 19th century, national unification, secularism, urbanization, poverty, and the industrial revolution's transformation of daily life combined to break many Germans' connections with the past. For a variety of reasons, including wartime outbursts of patriotic fever, Christmas became Germans' favorite holiday. The Christmas tree was thus present at the birth of a modern nation, and was accordingly a space of contestation over the limits and character of that nation. Consumer domesticity and bourgeois tastes were to be fostered, complete with frilly dresses, cozy sing-alongs, baked goods, and gift-packages sent to the troops. These were appropriate Christmas practices, and were from the beginning pitched as deeply "traditional."

Equally traditional drunken carousing, however, needed to be quashed. Christmas in Germany is set against the background of a society experiencing breakneck industrialization and social convulsions. An entire old order was passing away. The new country was understood as Protestant, bourgeois, and somewhat Prussian, and Christmas was an opportunity to imagine Catholics and stubbornly particular regions into the national fabric.

A new cultural space had been created, one which built upon a past that had never really existed ("Germanness") while simultaneously banishing that past in the name of community-building. Christmas was the collision of these antagonistic and emotionally fraught aspirations. Christmas could, accordingly, never satisfy. It could only leave celebrants wishing for something more.

In his novel Descent into Hell, Charles Williams tells of a jealous English academic reading about a knighthood awarded to his bitter rival. A knighthood for a historian? "Till that moment he had never thought of such a thing. The possibility had been created and withdrawn simultaneously, leaving the present fact to mock him."

This tension characterized the German churches' response to the emergence of Christmas as a national holiday. There had never before existed a national space in Germany. It took form during the Franco-Prussian War of 1870 and matured matured during World War I, when German regional and confessional diversities were seen as dangerous and un-patriotic. German churches found themselves defending cultural space simultaneous to its creation. It could never have been a fair fight, because it was conducted on grounds contradictory to the message of the manger.

Instead, Christmas became a knot of contradictions: a celebration of muscular militarism and feminine domesticity; coarse commercialism alongside mythologies of bygone days; the birth of Christ and anti-Semitism and xenophobia in general. These tensions, Perry argues, are the single-most enduring German Christmas tradition, having outlasted Bismarck, Hitler, and Communism. The postwar recovery years; the youth rebellions of the Sixties; the collapse of the GDR—all were accompanied by Christmas battles over the place of religion, the place of consumerism, and the place of women.

The Nazi Christmas is particularly galling, yet Perry manages to understate for great effect. 1934's Christmas market, celebrated outside the Berlin Cathedral, combined speeches by Goebbels and others; "the crowd joined in with collective renditions of 'Silent Night,' … the German national anthem, and countless 'Sieg Heils.' " It made perfect sense at the time.

As Perry subtly points out, the Nazi Christmas "complicates assumptions that all National Socialists were avowed anti-Christians." In fact, even Nazi attempts at resurrecting ancient German paganism made room for the (blond) Christ-child. This was a careful exercise in grafting invented racist traditions into consumerist traditions of recent provenance.

To this day, Perry concludes, German pollsters "continue to express surprise at the secularization of the holiday." An ever-shrinking fraction of Germans think of Christmas primarily in religious terms; more than anything else, Christmas for 21st-century Germans is "a celebration of family." Roughly half of the German population attended church on a recent Christmas day—more than the proportion believing in God. Non-believers celebrating the birth of Christ? It is hardly as strange as it sounds: "Germans may no longer believe," Perry says, "but Christmas is the time when they act as if they do by demonstrating an enduring attachment to religious tradition."

Paul Grant is pursuing a PhD in history at the University of Wisconsin.