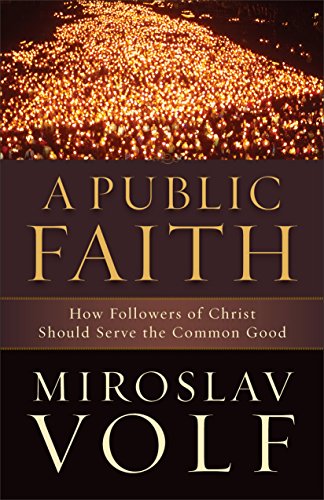 A Public Faith, How Followers of Christ Should Serve the Common Good
Miroslav Volf
Brazos Press, 2011
12.99

"A misunderstanding of how our faith should function can provide fertile ground both for the lure of temptation and the power of systems."
—Miroslav Volf

As Miroslav Volf's new book argues, the Christian faith is intrinsically a public, prophetic faith. Any attempt to deny this injures not only the Church but also the "City of Man" as well. But as Volf also argues, the "proper functioning" of Christian faith in public life is a profound challenge. As American Christians become increasingly involved in public life, one area in particular that we must all be watchful of is the proper functioning of those who are both ordained ministers and active political voices. My own writing has led me to analyze these "dual role" activists—people like Rev. Jim Wallis, Rev. Samuel Rodriguez, Fr.Robert Sirico, Bishop Harry Jackson, and Rev. Fred Shuttlesworth. While not prescribing any one method for how individuals with dual roles in both ecclesial and civic life should function, I think there are at least four good reasons, each consistent with Volf's book, why Christian individuals and institutions should be especially mindful of those who hold dual roles:

1) Dual role leaders are subject to heightened levels of what Volf calls "the lure of temptation." The intoxicating power of media attention, for instance, is a challenge for religious leaders and political leaders, and it is all the more enticing to those who are both. This does not mean that leaders of religious communities should not necessarily be leaders of political constituencies, but it means that their fellow Christians owe it to them to be aware of the extraordinary temptations that these individuals face.

2) Dual role leaders are particularly susceptible to what Volf calls "the power of systems", which is to say that they are vulnerable to manipulation by other religious and/or political organizations precisely because of the power those organizations perceive dual leaders having. On the positive side, this can lead to effective coalition building; on the negative side, it can weaken the prophetic voice we expect to hear from religious leaders because they are forced to weigh the effect their words will have on the powers that they have come to represent.

3) When ordained Christian ministers enter into the messy realm of secular political affairs, their actions will affect how the wider Christianity community is perceived in a way that is different from the impact of a lay Christian political activist or commentator. This is particularly true of Christian ministers who claim to represent denominations, large coalitions, and/or specific ethnic groups—they gain political access precisely because of those claims, so how they represent themselves is rightly seen as a representation of those communities. Their integrity level affects the integrity level of the individuals and institutions they claim to represent.

4) In addition to the integrity of the Church, the unity of the Church is affected by people who hold dual roles, particularly when their political position brings them into conflict with another Christian minister from the "other side." These encounters can be an occasion for public displays of civility and reasoned debate if handled well by both people, but they can also be glaring moments of scandal when one or both sides confuse policy disagreement with gospel disagreement.

For an example of the pitfalls that dual role leaders can fall into, consider an article by Bishop Harry Jackson published last month (Nov. 4) in The Wall Street Journal. Jackson's ecclesial role is as Senior Pastor of Hope Christian Church in Maryland and Bishop of a group he formed called the International Communion of Evangelical Churches (ICEC). His political leadership includes his work as founder and chairman of the High Impact Leadership Coalition (HILC) and the "new conservative umbrella group E Pluribus Unum." In his article, "The Churches of Cain and Obama," Jackson draws on his authority as a leader in the black church to judge the differences between Obama's prior membership in Chicago's Trinity United Church of Christ and Cain's role as an ordained minister at Atlanta's Antioch Baptist Church North. In the same article, Jackson goes on to express his political hope that Cain's more conservative views of marriage as "a sacred covenant between one man and one woman" would help him draw votes away from Obama and his views of marriage (which Jackson describes as "consistent with the views of the United Churches of Christ"). Bishop Jackson concluded his column with this:

For at least two generations, blacks have been taken for granted by Democrats and ignored by Republicans. Most blacks have looked the other way regarding their convictions about life and family when they have cast their votes. They have flocked to the polls for figures like Bill Clinton and Barack Obama, whose liberal views on social issues have little relation to their own. The option of Mr. Cain on the ballot might cause them to think twice.

Jackson was making a salient political point that many other non-ordained political commentators have made, but the fact that he is a Christian leader gave the article added weight and appeal. Of course, a month and an abundance of allegations later, with Cain having withdrawn from the campaign, Jackson's article reads like a politically opportunistic broadside of the kind we are accustomed to seeing from the chattering class. The obvious difference is that Jackson is not merely a "talking head"; he is bishop of more than a thousand congregations worldwide. We owe it to those congregations, and to the countless other congregations led by dual role men and women, to respectfully ask, in the words of Volf, if their efforts are a "proper functioning" of ordained Christian ministers or a type of what we might call "Protestant clericalism." To ask this question is not to yield to a "naked public square" but rather to seek to guard the integrity of the Church's voice.

Greg Metzger mastered in International Relations at Boston University. In addition to Books & Culture, his work has appeared in The Christian Century, Touchstone, and Commonweal, and at the websites Talk to Action and Patheos.