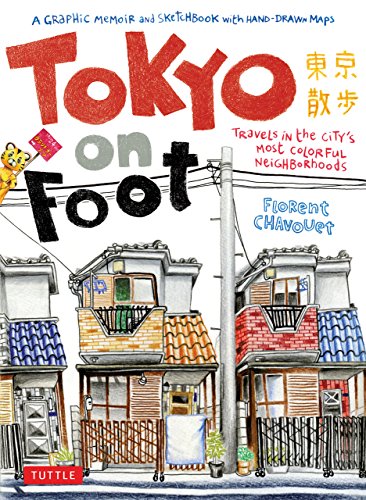 Though it wouldn't be hard for even an attentive reader to miss something in the spiraling intricacies of text-laden colored-pencil drawings in Tokyo on Foot: Travels in the City's Most Colorful Neighborhoods, I don't think Florent Chavouet ever mentions that hand-drawn maps, stripped-down versions of the ones that introduce each chapter, are not just quaint niceties but necessary tools for navigating Japanese cities. Or at least they were—I would guess GPS and other technological marvels have partially replaced written and drawn directions, but I doubt they will ever fully supplant them.

I don't know for sure because I am not an expert on Japan—I was there for a couple weeks years ago, and have had a longstanding interest in various aspects of its culture—and neither is Chavouet, as he makes clear—even exaggerates—in his somewhat strange introduction. Strange in several ways: because in it Chavouet contradicts, or at least strongly undermines, the title of the book (he does not walk around Tokyo, as the "on Foot" suggests, but, rather, rides a bicycle everywhere) and because he states that the book is "neither a guide nor an adventure story" when it definitely includes the latter, and for anyone with imagination and ticket to Tokyo, could easily serve as the former.

Still, Chavouet's modesty is understandable. Japan's visual culture is a favorite obsession of pompous academics and clueless teenagers alike, and misreadings, hyperbolic pronouncements, breathless condescending adulation, and plain old cultural imperialism abound in both popular and academic takes on that country and its people. Thankfully, as he recounts his six-month stay in Tokyo with his partner (she's there for an internship), Chavouet trusts himself enough to let his readers trust him, and his modesty does not become timidity.

And he pulls off a hard thing, making a travel book that is at once unpretentious and wholly engaging, offhanded without being aloof, funny but not flip. First published in a French edition in 2009, Tokyo on Foot veers from cartoonish drawings illustrating general observations to renderings that faithfully portray scenes and objects described in particular, often finding an interesting middle ground. Each chapter begins with a map of the area, heavily annotated and loaded with delectable tidbits of detail, followed by a drawing of that area's Koban, the neigborhood police stations that offer a kind of survey of "more or less recent" Japanese architectural types. Thus oriented, Chavouet relates his experiences in each place on pages dense with drawings and text and collage, his anecdotal, non-linear narrative twining among buildings and people and objects and products, presenting miniature typological studies ("sociology made easy," "build your own Tokyo street"), quotidian observations, charming jokes (one drawn statue says to another "Pssst … rock paper scissors?"), and, in a central part of the book, a light yet harrowing account of his encounter with the Tokyo police. I won't give away the plot, but suffice it to say that it counts as an adventure story as well as a nuanced reading of the apparent contradictions of Japanese culture as experienced by an outsider.

Chavouet's drawings are all engaging and often splendid. He confidently juxtaposes simplified caricature and nearly photo-realistic renderings and nearly exhausts the possibilities of colored pencils. A delicately shaded landscape showing the hills and trees of the Shinjuku Gyoen National Garden is followed by a study of one of its trees executed in boldly hatched line. One of the best drawings in the book is a two-page spread depicting the Kanda River as it traverses the Ochanomizu neighborhood: the river slashes across the bottom left corner of the page, interrupted by a small map and a tiny portrait of a stingy Nepalese fellow, beneath two-and-three story houses crammed along the concrete bank, and above them, following the river, a train line. In the bottom corner of the righthand page, a pigeon asks a question ["nihongo wakaru?"—"do you understand Japanese?"], and the viewer's eye swirls from there down the river, then back along the train tracks before resting and seeing in its wholeness a sophisticated and satisfying composition.

Throughout, the frenetic energy of pages dense with diminutive cartoons, collaged ephemera, and smatterings of text is offset and enhanced by quietly masterful renderings of buildings and landscapes; the rhythm created thereby is consonant with the experience of Japanese cities, wherein one can leave the sensory overload of a pachinko parlor and step into the grounds of a temple that in its moss and maple and raked gravel seems to exist in absolute, timeless tranquility. That consonance of pages and place is one of several that make Tokyo on Foot more than just a confection; Chavouet may be, as he avers, merely a tourist, but he is an acute observer and a trustworthy guide.

Andrew Wilson's photographs appear with the Stranger in a Strange Land column in Books & Culture.