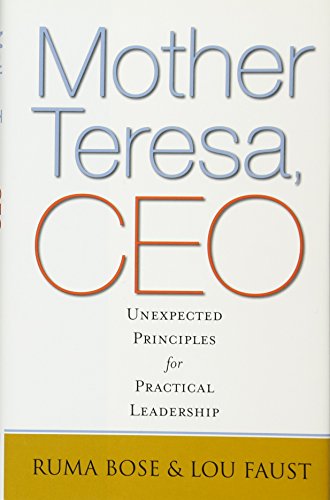 How NOT to write about leadership.

It is not hard to make the case that Western Christians, especially mainline Protestants, have long been profoundly confused about business. We have treated church members who run or work in capitalistic endeavors as if they were doing something slightly sordid. The real work of ministry is done by those who pastor churches, teach students, run non-profits, or pursue other avenues of do-gooding. This is ironic in that one of the Reformation's chief charisms is the priesthood of all believers—the claim that a vocation to pastoral ministry is no more essentially holy than any other work God calls one of his saints to do. It is also hypocritical in that all of our ministries depend on the funding of our sisters and brothers who make their money the only way anyone ever makes it: in business.

There is a real opportunity, then, for sensitive and probing theological work integrating theology and business. Some have begun to do just such work, and I anticipate much more to come, especially as the business community wrestles with the fallout of the Great Recession and looks for more innovative ways to do good while doing well. Like all good theology, such work will draw on Scripture and tradition and do so in innovative ways for a new day while integrating the best of erudition from business practice, especially from saints who've won hard-earned wisdom in that field but rarely been told that work has anything to do with God (except, of course, when we approach them in stewardship season).

This potential is why the book Mother Teresa, CEO is so disappointing. The premise is enticing: Ruma Bose calls herself a "serial entrepreneur" who, as a young woman, spent some time as a volunteer with the Missionaries of Charity in Calcutta. Bose's personal stories about her time with Mother are the book's most enlightening portions, as she describes the way the great woman would envelop Bose's hands in her own, smile profoundly, and treat her as if she was the only person who mattered on the planet for that brief moment. Mother treated everyone with that same overwhelming combination of charisma and personal attentiveness. We call her a "saint" for a reason.

But Mother was also an entrepreneurial savant, opening hundreds of homes for the dying and other ministries in dozens of countries around the world. Such endeavors require billions (that's a "B") of dollars, savvy management, hiring expertise, liasing of complex relationships (in this instance, with the Catholic Church), and the gumption and wherewithal to know who to hire and how to acquire skills one lacks. At Leadership Education at Duke Divinity, we talk about the capacities of "generative organization" and "sustainable design" as marks of faithful institutional leaders. How precisely did Mother scale her strengths, cover for her weaknesses, empower others, and lead such a complex organization?

We're not told in Mother Teresa, CEO. Instead we get zen koan-like driblets. The first chapter is called "Dream It Simple, Say It Strong," and concentrates on Mother's vocation to serve "the poorest of the poor." We are then encouraged to articulate our own missions with similar clarity and panache, since each of us can become as determined and successful in casting and pursuing our own vision as she was. Another chapter covers the "Power of Silence," in all of 5 pages. Another discusses criticisms of Mother, such as her acceptance of donations from dictators and other crooks, under the mantra, "To Get to the Angels, Deal with the Devil." That particular chapter asks repeatedly whether and how "the ends justify the means." The fact that Mother, as a Catholic institutional leader, would never have even asked such a Machiavellian question, let alone answered it, is never addressed (nor is the fact that the chapter mantra is abject nonsense). In each chapter Mother's own words are attended to superficially, if at all, for no more than a page or two before Bose and her co-author, a former software CEO, fill out Mother's advice with their own experience.

In short, this book is among the worst entries in what I sometimes call "the leadershit" (say "leadership literature" five times fast). Take a remarkable and holy person like Mother. Boil down her thought into eight simple principles. Remove any mention of Jesus (I found one reference in this book), even though her care for the poor was incoherent without Jesus. Tell a few personal anecdotes. Avoid any tangible or nuanced account of how she or her organization actually think about money or hiring or organizational scale or anything other than pithy, inspirational, "Whatever I Need To Know I Learned In Kindergarten" sorts of vignettes. Give the book a catchy marketing title, a glossy cover, blurbs from other leadershit authors, and large enough print and short enough chapters that a superficial reader can consume it on a short commuter flight, and you're done.

The tragedy, of course, is that no reader will learn more about Mother than she knew before. For her prejudice will be confirmed that religion is only there for a sort of inspirational pick-me-up. The specific differences that Jesus or Buddha or Hinduism or capitalism or Yoga makes don't matter here any more than they do for your second cup of coffee in the morning.

Nor will a reader of this book actually learn anything new about leadership. Both Mother and her organization are presented as felt cutouts of a Sunday school sort, removed from any real institution's specific challenges or difficulties. What you'll get is the same tripe you get from any other leadership book in the airport bookshop, and $22 less in your expense account.

For Christian theology, a saint is a mystery. Saints reflect the living God, the most profound mystery of all, whom no human can fathom. They reflect the depths of God's descent among us in Jesus and the glory of his ascension back to his Father. They can't be simply explained, replicated, encapsulated, or cloned. We can only give thanks for them and ask God to give us more of them. To devote 114 pages to instilling their essence is little short of insulting.

There is one bright side. There is still good work to do on the wisdom of generative organization, often practiced in the church but seldom written about well. And there is good work to do integrating economics and theology. But this book, alas, has done so little on both counts that we cannot even count it a failure. It has not even tried.

Jason Byassee is a fellow in theology and leadership at Leadership Education at Duke Divinity and senior pastor of Boone United Methodist Church in the Western North Carolina Conference.