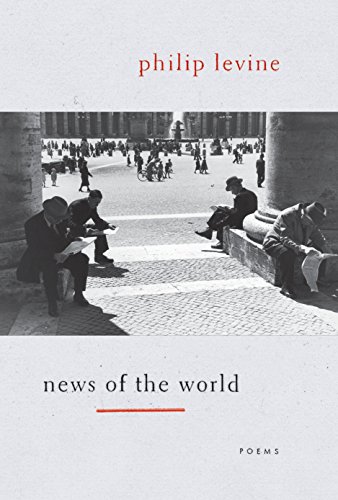 News of the World

Editor's Note: We posted this review in April. We're running it again today in honor of Philip Levine's appointment as the new Poet Laureate of the United States.

"Everyone loves a story," Philip Levine writes in News of the World. Or do they? "Let's begin with a house," Levine continues,

We can fill it with careful rooms and fill the rooms
with things—tables, chairs, cupboards, drawers
closed to hide tiny beds where children once slept
or big drawers that yawn open to reveal
precisely folded garments washed half to death,
unsoiled, stale, and waiting to be worn out.

If we all love stories, as it seems, it is also true that sometimes they can fail to "deliver" the pleasure we have come to expect of them. They can be as predictable and "worn out" as "precisely folded garments" in "big drawers," moving from setting to climax to denouement.

But poetry, for Levine, can "deliver" where prose fiction cannot. In Levine's hands at least, his character portraits, for which he has become known, click along as seamlessly as a Hemingway short story, but turn as quickly as a diamondback, on a question here, an insignificant detail there:

Two young men—you just might call them boys—
waiting for the Woodward streetcar to get
them downtown. Yes, they're tired, they're also
dirty and happy. Happy because they've
finished a short workweek, and if they're not rich
they're as close to rich as they'll ever be
in this town. Are they truly brothers?
You could ask the husky one, the one
in the black jacket he fills to bursting;

With a word—"might"—Levine "fronts" the fictional narrative, disarming our critical skepticism and freeing us to lose ourselves in the subtle pathos of the situation in which a few lines later we ourselves become a character. Few poets writing today are this coy or skilled. As the poet Frank O'Hara once said: poetry is "quicker […] than prose."

Despite the lightheartedness of some of the poems, a sense of loss and nostalgia pervades the volume. A woman working in Toledo will lose her only son in a war ten years from now, a Detroit factory worker dreams of a "cabin / in the forest" of Siberia, snow falling "only in the dark / so that at daybreak the world / was new," and three boys searching for crawdads in the late light of a June evening, which hangs on ominously "before / the dark whispers the last word," return home empty-handed. These losses are replaced—sometimes happily—by small accommodations, which offer momentary satisfaction, until, as Levine puts it in "Burial Rites," we die, "taking nothing, giving / nothing, empty, and free at last." This is the story of life, for Levine, and, in a sense, the subject of all his poems.

Yet, there is another story in the volume—and, indeed, in all of Levine's poems. In "Islands," he writes:

One lives inside an immense, endless opera punctuated by the high notes of sirens & the basso profundo of trucks & jackhammers & ferries & tugboats. And when you merge your own small & sincere voice with the singing you come to realize this music is merely the background to a great American epic. All these voices are singing about who you are. For a moment you are part of the mainland.

In mingling his "sincere voice" with the sounds of "the mainland," the poet momentarily experiences a sense of communion, or identity, for which he has longed. We tend to avoid referring to "transcendence" with respect to poetry because, ironically, it seems passé. Yet, this is exactly what poetry offers us, according to Levine. Even if only momentarily, poetry "delivers."

Micah Mattix is assistant professor of literature at Houston Baptist University and the book review editor for The City. His book Frank O'Hara and the Poetics of Saying "I" will be published this month by Fairleigh Dickinson University Press.