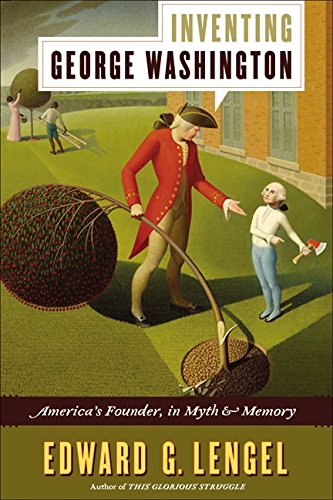 George Washington in myth and memory.

Edward Lengel's Inventing George Washington could easily have been a boring, whiny book. Lengel, senior editor of Washington's papers at the University of Virginia, offers a history, not of Washington, but of Washington's myth-makers. A less creative author might simply have complained about how no one understands the real Washington but the current caretakers of his papers—and that concern certainly is implied. But mostly, Lengel spins a rollicking tale of the opportunists and outright deceivers who have profited from Washington's memory. In the process, Lengel accomplishes a rare feat: he makes historiography fun.

From the outset of the War of Independence, many realized that America's Founding would become a source of endless fascination and opportunities for profit. As Lengel says, "Americans saw the dollar bill on Washington long before Washington appeared on the dollar bill." Christians engaged in spiritual myth-making, too. The sources revealing an openly devout, river-baptized Washington have ranged from wishful recollections to outright forgeries. For a time, almost every biographer produced another story of how someone once stumbled across Washington praying in the woods. But the precise nature of Washington's faith remains shrouded, just as he apparently intended.

Washington would have been horrified by the myth-making and indiscriminate distribution of his papers after his death. Jared Sparks, the "arch-plunderer" of Washington's manuscripts and editor of the first published edition of his papers, drastically revised letters, loaned out and cut up original documents, and generally wreaked havoc on our written connection to the man. Thankfully, the staff at the Washington papers project have made public as many surviving documents as possible, both in printed volumes and in a new digital edition. Washington's memory is still big business, but with the authoritative edition of his papers and books like Ron Chernow's magisterial Washington: A Life, we have more hope than ever of distinguishing the man from the myth.

Thomas S. Kidd is Senior Fellow at the Institute for Studies of Religion, Baylor University, and the author of God of Liberty: A Religious History of the American Revolution.