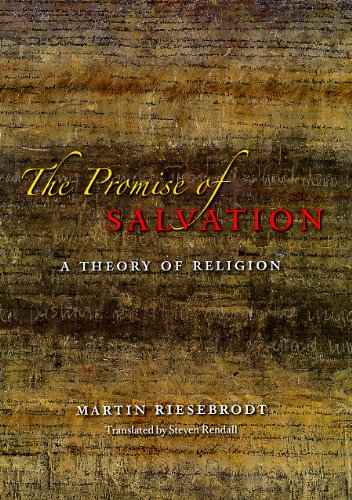 The Promise of Salvation: A Theory of Religion
Martin Riesebrodt
University of Chicago Press, 2010
228 pp., 99.00

Martin Riesebrodt begins The Promise of Salvation: A Theory of Religion with slow head-shaking: "When soccer games are seen as religious phenomena and the recitation of Buddhist sutras is not, something has obviously gone wrong." (He returns to this athletic bugbear so often that "soccer" merits its own index entry.)

Idiosyncratic aversions to soccer aside, sociologist Riesebrodt's underlying claim is that scholars need a theory that can compare across religious traditions but not so indiscriminately as to lose sight of the subject under investigation. Providing such a theory forms his goal, from his lucid preface to a concluding chapter on "The Future of Religion," in which he suggests how his theory applies to everything from premodern religions to secularization theory. The book divides evenly into two parts: a review of previous attempts at defining, understanding, and explaining religion and then an explication of his own theory.

Riesebrodt's discussion of others' attempts to theorize religion is refreshing in its clarity, agility, and humility. His chapter on "Scholarly Imaginations of Religion" provides critical summaries of functionalist, essentialist, psychological, and neuroscientific definitions of religion that build toward Riesebrodt's own proposal.

His "theory of religion" appears most clearly in the chapter entitled "Religious Practice and the Promise of Salvation: Outline of a Theory of Religion." Riesebrodt approaches religion through its practices, specifically "liturgies" that worshipfully encounter supernatural powers. These "interventionist" practices—contrasted with discursive or behavior-regulating practices—reveal that religions "ward off misfortune, overcome crises, and promise salvation." Other chapters then apply Riesebrodt's theory to a dizzying scope of examples from multiple continents and centuries, as well as a topical breadth including virtuosi, folk religiosities, and propaganda.

Riesebrodt's thoughtful engagement with other scholars as well as his innovative approach based on religious practices may provide the necessary apparatus for inter-religious comparisons, yet still exclude fanatic soccer crowds from being called "religious."

Jeffrey L. Bain-Conkin is a doctoral candidate at the University of Notre Dame. His dissertation is a comparison of Jewish, Catholic, and Protestant religious practices during the 19th century. His case study is Louisville, Kentucky.