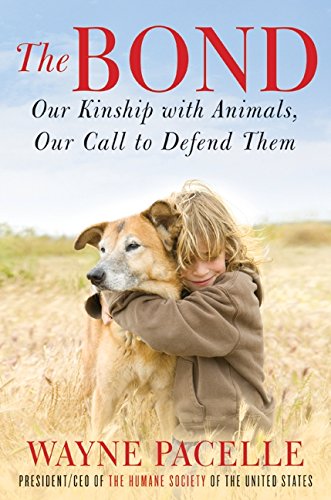 On Humans and Other Animals

A lifelong lover of animals, I had an epiphany some years ago when I was driving along and spotted on the road ahead what I thought was a dead dog. Quickly, a lump formed in my throat—and just as quickly disappeared seconds later when I drove closer and saw that the black-and-white carcass was that of a skunk, not a dog. The moment of enlightenment came in that sudden swing of emotions, followed by the realization that, objectively, there is no difference between a dog and a skunk, and that my two divergent responses were then entirely subjective, the product of a social and emotional construct. It made me wonder if God's view of a skunk and his view of a dog are as wide apart as mine were in that moment. I doubt it.

The relationship between humans and animals has always been complex, contradictory, and anything but consistent. The Bond, the first book by Wayne Pacelle, president and CEO of the Humane Society of the Unites States (HSUS), is in large part an examination of this complicated history of humankind's interaction with the various species of the animal kingdom. The book is an important read for anyone concerned about our responsibility as humans to all animals, since an effective approach to animal welfare must consider the many areas where their welfare is compromised. Such an endeavor is, alas, not for the faint of heart. Those new to modern animal welfare issues will learn in reading The Bond things which it is more pleasant not to know. At the same time, while Pacelle clearly respects his readers enough to provide details the responsible citizen and consumer must understand, he sensitively and skillfully drops the curtain at just the right moments. Readers like me who can't handle shows like the Animal Planet's Animal Cops (which depicts investigations into cases of animal cruelty) should be able to read every word of this book, despite some teeth-gritting and stomach-churning moments now and then.

Yet our relationship as humans to animals is so personal and so individualized, I can't imagine this book being read the same way by any two people. The Bond covers every animal welfare issue of concern today, along with a good many from history: whale-harpooning, industrial farming, dogfighting and cockfighting, breeding practices at puppy mills, big-game hunting, and more. Depending on one's particular experiences, biases, and soft spots, each of these topics might be received in different ways. I approached the section on the clubbing of baby seals with much fear and trembling, while venturing more bravely into the portion on cockfighting. My passing familiarity with the world of AKC dog shows prepared me for the problems outlined in that arena, but the book's descriptions of the treatment of "downer cows" in the slaughterhouse were more difficult to read. And when I teared up at Pacelle's brief narration of the euthanizing of his family dog when he was a boy, my response owed less to the poignancy of his experience (touching as it is) than to the fact that my own aging dog was right next to me, sleeping, as I read.

Appropriately, then, The Bond attempts to bring a bit more rationality, as well as compassion, to bear on these topics. We've come a long way since René Descartes and his disciples assured rapt public audiences that the cries of animals sliced open while alive for scientific exploration were the mere creakings of "machines." Yet despite such progress, Pacelle writes, "there's a vast gap between what we know and what we allow, what objective science affirms and what the laws permit." Even apart from the enactment of new laws that might be warranted, Pacelle seeks at the very least consistent application of existing standards, both legal and moral. For, as he states, there's near universal agreement on "the broad principle that animals deserve kindness and protection," but wide and consistent application of that principle is nowhere near being achieved.

Within the highly politicized spectrum of positions on animal welfare, the protections Pacelle calls for in The Bond and for which the HSUS stands are situated somewhere in the middle. Unsurprisingly, criticism is lobbed at them from all sides among the interested parties. The blogosphere is rife with replicated talking points from food industrialists and radical animal rightists alike, condemning the HSUS from various angles. Industrial farmers, the food industry, government agencies, and countless political and business interests fight the HSUS's legislative initiatives at every turn.

For example, opponents of Proposition 2—a 2008 ballot initiative in California directed at some of the most extreme confinement methods used in industrial farming—spent nearly $10 million to fight the legislation. Even so, the proposal was not only passed by voters overwhelmingly, but it received more votes than any ballot initiative in American history, demonstrating, Pacelle argues, that most people care about how animals—even the ones that end up on the dinner table—are treated. At the other end of the spectrum, the HSUS is criticized by more radical animal rights organizations for refusing to condemn all forms of hunting, accepting humane euthanasia of animals at overpopulated shelters, not calling for an outright ban on animal testing, and, especially, for teaming up with Michael Vick in an anti-dogfighting campaign targeting at-risk youth in urban communities.